Mariner 2 (Mariner-Venus 1962), an American space probe to Venus, was the first space probe to conduct a successful planetary encounter [1]. The first successful spacecraft in the NASA Mariner program, it was a simplified version of the Block I spacecraft of the Ranger program and an exact copy of Mariner 1. The missions of Mariner 1 and 2 spacecraft are together sometimes known as the Mariner R missions. Mariner 2 passed within 35,000 kilometres (22,000 mi) of Venus on December 14, 1962.

The Mariner probe consisted of a 100 cm (39.4 in) diameter hexagonal bus, to which solar panels, instrument booms, and antennas were attached. The scientific instruments on board the Mariner spacecraft were two radiometers (microwave and infrared), a micrometeorite sensor, a solar plasma sensor, a charged particle sensor, and a magnetometer. These instruments were designed to measure the temperature distribution on the surface of Venus, as well as making basic measurements of Venus' atmosphere. Due to the planet's thick, featureless cloud cover, no cameras were included in the Mariner unit.[citation needed] Mariner 10 later discovered that extensive cloud detail was visible in ultraviolet light.

The primary mission was to receive communications from the spacecraft in the vicinity of Venus and to perform a radiometric temperature measurements of the planet. A second objective was to measure the Interplanetary Magnetic Field and charged particle environment.[2][3]

The two-stage Atlas-Agena rocket carrying Mariner 1 veered off-course during its launch on July 22, 1962 due to a defective signal from the Atlas and a bug in the program equations of the ground-based guiding computer, and subsequently the spacecraft was destroyed by the Range Safety Officer. A month later, the identical Mariner 2 spacecraft was launched successfully on August 27, 1962, sending it on a 3½-month flight to Venus. On the way, it measured the solar wind, a constant stream of charged particles flowing outwards from the Sun, confirming the measurements by Luna 1 in 1959. It also measured interplanetary dust, which turned out to be more scarce than predicted. In addition, Mariner 2 detected high-energy charged particles coming from the Sun, including several brief solar flares, as well as cosmic rays from outside the Solar System. As it flew by Venus on December 14, 1962, Mariner 2 scanned the planet with its pair of radiometers, revealing that Venus has cool clouds and an extremely hot surface.

The spacecraft is now defunct in a heliocentric orbit.

The Mariner 2 spacecraft was designed and built by the Jet Propulsion Laboratory of the California Institute of Technology.[4] It consisted of a hexagonal base, 1.04 meters across and 0.36 meters thick, which contained six magnesium chassis housing the electronics for the science experiments, communications, data encoding, computing, timing, and altitude control, and the power control, battery, and battery charger, as well as the altitude control gas bottles and the rocket engine. On top of the base was a tall pyramid-shaped mast on which the science experiments were mounted which brought the total height of the spacecraft to 3.66 meters. Attached to either side of the base were rectangular solar panel wings with a total span of 5.05 meters and width of 0.76 meters. Attached by an arm to one side of the base and extending below the spacecraft was a large directional dish antenna.[citation needed] 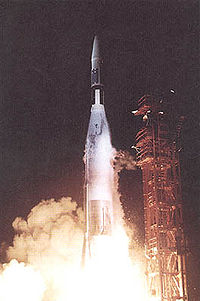 The power system of Mariner 2 consisted of two solar cell wings, one 183 cm by 76 cm and the other 152 cm by 76 cm (with a 31 cm dacron extension (a solar sail) to balance the solar pressure on the panels), which powered the craft directly or recharged a 1000 Watt-hour sealed silver-zinc cell battery. This battery was used before the panels were deployed, when the panels were not illuminated by the Sun, and when loads were heavy. A power-switching and booster regulator device controlled the power flow. Communications consisted of a 3 Watt transmitter capable of continuous telemetry operation, the large high gain directional dish antenna, a cylindrical omnidirectional antenna at the top of the instrument mast, and two command antennas, one on the end of either solar panel, which received instructions for midcourse maneuvers and other functions.[citation needed]

Propulsion for midcourse maneuvers was supplied by a monopropellant (anhydrous hydrazine) 225 N retro-rocket. The hydrazine was ignited using nitrogen tetroxide and aluminum oxide pellets, and thrust direction was controlled by four jet vanes situated below the thrust chamber. Attitude control with a 1 degree pointing error was maintained by a system of nitrogen gas jets. The Sun and Earth were used as references for attitude stabilization. Overall timing and control was performed by a digital Central Computer and Sequencer. Thermal control was achieved through the use of passive reflecting and absorbing surfaces, thermal shields, and movable louvers.[citation needed]

Only 40 pounds (18 kg) of the spacecraft could be allocated to scientific experiments.[5] The following scientific instruments were mounted on the instrument mast and base:

The magnetometer was attached to the top of the mast below the omnidirectional antenna. Particle detectors were mounted halfway up the mast, along with the cosmic ray detector. The cosmic dust detector and solar plasma spectrometer were attached to the top edges of the spacecraft base. The microwave radiometer, the infrared radiometer and the radiometer reference horns were rigidly mounted to a 48 cm diameter parabolic radiometer antenna mounted near the bottom of the mast. All instruments were operated throughout the cruise and encounter modes except the radiometers, which were only used in the immediate vicinity of Venus.

In addition to these scientific instruments, Mariner 2 had a data conditioning system (DCS) and a scientific power switching (SPS) unit. The DCS was a solid-state electronic system designed to gather information from the scientific instruments on-board the spacecraft. It had four basic functions: analog-to-digital conversion, digital-to-digital conversion, sampling and instrument-calibration timing, and planetary acquisition. The SPS unit was designed to perform the following three functions: control of the application of AC power to appropriate portions of the science subsystem, application of power to the radiometers and removal of power from the cruise experiments during radiometer calibration periods, and control of the speed and direction of the radiometer scans. The DCS sent signals to the SPS unit to perform the latter two functions.[5]

The scientific objectives were:[2]

Besides the experiments with the scientific instruments, the objectives of both the Mariner 1 and 2 probes included also engineering objectives:[2]

Mariner 2 was launched from Cape Canaveral Air Force Station Launch Complex 12 at 06:53:14 UTC on August 27, 1962 by a two-stage Atlas-Agena rocket.[5][14] 5 minutes after lift-off, the Atlas and Agena-Mariner separated, followed by the first Agena burn and second Agena burn. The Agena-Mariner separation injected the Mariner 2 spacecraft into a geocentric escape hyperbola at 26 minutes 3 seconds after lift-off. The NASA NDIF tracking station at Johannesburg, South Africa, acquired the spacecraft about 31 minutes after launch. Solar panel extension was completed approximately 44 minutes after launch. The Sun lock acquired the Sun about 18 minutes later. The high-gain antenna was extended to its acquisition angle of 72°. The output of the solar panels was slightly above the predicted output. As all subsystems were performing normally, as the battery was fully charged, and as the solar panels providing adequate power, the decision was made on August 29 to turn on cruise science experiments. On September 3, the Earth acquisition sequence was initiated and Earth lock was established 29 minutes later.[5]

On September 8 at 12:50 UTC suddenly the spacecraft automatically turned on the gyros and the cruise science experiments were automatically turned off. The exact cause is unknown as attitude sensors went back to normal before telemetry measurements could be sampled, but it may have been an Earth-sensor malfunction or a collision with a small unidentified object which temporarily caused the spacecraft to lose Sun lock. A similar experience happened on September 29 at 14:34 UTC. Again, all sensors went back to normal before it could be determined which axis had lost lock. By this date the Earth sensor brightness indication had essentially gone to zero, however, this time telemetry data indicated the Earth-brightness measurement had increased to the nominal value for that point in the trajectory.[5]

On December 14 the radiometers were turned on. Mariner 2 approached Venus from 30 degrees above the dark side of the planet, and passed below the planet at its closest distance of 34,773 km at 19:59:28 UT.[citation needed]

After encounter, cruise mode resumed. Spacecraft perihelion occurred on December 27 at a distance of 105,464,560 km. The last transmission from Mariner 2 was received on January 3, 1963 at 07:00 UTC, making the total time from launch to termination of the Mariner 2 mission 129 days.[15] Mariner 2 remains in heliocentric orbit.

The data produced during the flight consisted of two categories, namely tracking data and telemetry data.[15]

The microwave radiometer made three scans of Venus in 35 minutes on December 14, 1962 starting at 18:59 UTC.[8] The first scan was made on the dark side, the second near the terminator and the third was located on the light side.[8][16] The scans with the 19 mm band revealed peak temperatures of 490 ± 11 K on the dark side, 595 ± 12 K near the terminator, and 511 ± 14 K on the light side.[17] It was concluded that there is no significant difference in temperature across Venus.[8][16] However, the results suggest a limb darkening, an effect which presents cooler temperatures near the edge of the planetary disk and higher temperatures near the terminator.[6][7][8][16][17][18] This also supported the theory that the Venusian surface was extremely hot or the atmosphere optically thick.[8][16][17]

The infrared radiometer showed that the 8.4 μ and 10.4 μ radiation temperatures were in agreement with radiation temperatures obtained from Earth-based measurements.[10] There was no systematic difference between the temperatures measured on the light side and dark side of the planet, which was also in agreement with Earth-based measurements.[10] The limb darkening effect that the microwave radiometer detected was also present in the measurements by both channels of the infrared radiometer.[10][16][18] The effect was only slightly present in the 10.4 μ channel, but was more pronounced in the 8.4 μ channel.[16] The 8.4 μ channel also showed a slight phase effect. The phase effect indicated that if a greenhouse effect existed, heat was transported in an efficient manner from the light side to the dark side of the planet.[16] The 8.4 μ and 10.4 μ showed equal radiation temperatures, indicating the limb darkening effect would appear to come from a cloud structure rather than the atmosphere.[10] Thus, if the measured temperatures were actually cloud temperatures instead of surface temperatures, these clouds would have to be quite thick.[9][16][18]

The magnetometer detected a persistent interplanetary magnetic field varying between 2 γ and 10 γ, which agrees with prior Pioneer 5 observations from 1960. This also means that interplanetary space is rarely empty or field free.[11] The magnetometer could detect changes of about 4 γ on any of the axes, but no trends above 10 γ were detected near Venus, nor were fluctuations seen like those that appear at Earth's magnetospheric termination. This means Mariner 2 found no detectable magnetic field near Venus, although that didn't necessarily mean Venus had none.[16][19] However, if Venus had a magnetic field, it would have to be at least smaller than 1/10 the magnetic field of the Earth.[19][20] In 1980, the Pioneer Venus Orbiter indeed showed that Venus has a small weak magnetic field.[21]

The Anton type 213 Geiger-Müller tube performed as expected.[22] The average rate was 0.6 counts per second. Increases in its counting rate were larger and more frequent than for the two larger tubes, since it was more sensitive to particles of lower energy.[5] It detected 7 small solar bursts of radiation during September and October and 2 during November and December.[23] The absence of a detectable magnetosphere was also confirmed by the tube; it detected no radiation belt at Venus similar to that of Earth. The count rate would have increased by 104, but no change was measured.[5][24]

It was also shown that in interplanetary space the solar wind streams continuously[14][25] and the cosmic dust density is much lower than the near-Earth region.[26] Improved estimates of Venus' mass and the value of the astronomical unit were made. Also, research suggested (which was later confirmed by other explorations) that Venus rotates very slowly and in a direction opposite that of the Earth.[27]