Dae Insu, also known as King Seon (r. 818-830) was the 10th king of the Korean kingdom of Balhae. He restored national strength, and is remembered today as the last of the great Balhae rulers before its fall.

Dae Insu was a 4th-generation descendant of Dae Joyeong's younger brother, Dae Ya-bal. In spite of the collateral root, he succeeded to the throne during the years of 817 and 818. He reestablished royal authority, and strengthened the military tremendously. 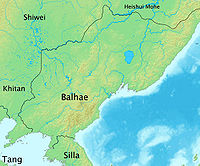 The territory of Balhae, In 830s during the reign of king Seon of Balhae.

King Seon concentrated heavily on the empire's territorial expansion, and led campaigns that resulted in the absorbing of many northern Malgal tribes including Heishui Mohe. Southwest Little Goguryeo in Liaodong was absorbed into Balhae, also he ordered southward expansion to Silla.

During his 12-year reign, he dispatched embassies five times to Japan, which was aimed at establishing diplomatic relations as well as trade routes. Balhae emissaries won favorable recognition in Japan even though Japan wanted Balhae to restrict the dispatchment due to the excessive burden of reception. The Balhae-Japan trading route across the Sea of Japan (East Sea) became one of the most important trading routes for Japan.

He died in 830 and his grandson Dae Ijin succeeded to the throne.