The Cremaster Cycle is an art project consisting of five feature length films, together with related sculptures, photographs, drawings, and artist's books; it is the best-known work of American visual artist and filmmaker Matthew Barney.

The Cremaster Cycle was made over a period of eight years (1994–2002) and culminated in a major museum exhibition organized by Nancy Spector of the Solomon R. Guggenheim Museum in New York City, which traveled to the Museum Ludwig in Cologne and the Musée d'art Moderne in Paris from 2002-03. Barney's longtime collaborator Jonathan Bepler composed and arranged the soundtracks for the films.[1]

Nancy Spector has described the Cremaster cycle (1994–2002) as "a self-enclosed aesthetic system."[2] The cycle includes the films as well as photographs, drawings, sculptures, and installations the artist produced in conjunction with each episode. Its conceptual departure point is the male cremaster muscle, the primary function of which is to raise and lower the testes in response to temperature.

The cycle repeatedly returns to those moments during early sexual development in which the outcome of the process is still unknown — in Barney's metaphoric universe, these moments represent a condition of pure potentiality. As the cycle evolved over eight years, Barney looked beyond biology as a way to explore the creation of form, employing narrative models from other realms, such as biography, mythology, and geology.

actual production order of the movies,
compared with numerical order

The films are significantly different in length; the longest (and last-made) is #3, at over 3 hours, while the remaining four are approximately 1 hour each, for a total of approximately 7 hours – #3 itself is almost half the total length. There is precious little dialog in any of the films; only #2 features significant dialog.[3]

An important precursor of the Cremaster Cycle is Drawing Restraint, which is also a biologically inspired multi-episode work in multiple media, also featuring the field emblem.

As of 2010[update], the films are not available on mass-market DVDs, and according to the press release for the 2010 US tour, the cycle "is Not Now Nor Will it Ever be Available on DVD".[4][5] The films are primarily available via periodic screenings,[6][7] and in bootleg versions, as on peer-to-peer networks.[6]

Palm Pictures, the distributor, has not made the series available on DVD, though there were some rumors and announcements to this effect in 2003.[8][9] So far, only an excerpt, "The Order" (from episode 3) has been released on mass-market DVD. 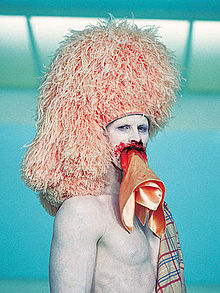 Matthew Barney as the Apprentice

Reaction to the cycle is sharply divided – some consider it a major work of art, on a par with Un Chien Andalou and The Waste Land,[12] while others dismiss it as vapid, self-indulgent tedium.[13] This is summarized by one critic as "Barney's cinematic art inspires both awe and revulsion, often simultaneously." Indeed, the Village Voice featured two reviews, with art critic Jerry Saltz praising the cycle, and film critic J. Hoberman panning it.

Lavish praise includes:"The Cremaster Cycle by Matthew Barney is the first truly great piece of cinema to be made in a fine art context since Dali and Bunuel filmed Un Chien Andalou in 1929. It is one of the most imaginative and brilliant achievements in the history of avant-garde cinema."[12] while scathing criticism describes it as "a mostly tedious succession of striking but vacant imagery whose effect diminishes the longer you look at it," from which "any sense of mystery or wonder is drained."[13]

The visuals are roundly praised, however, and some (Hoberman) feel that the movies work well as parts of installations, due to visuals, though not as movies, due to poor editing and pacing.

The large volume by Nancy Spector, Matthew Barney: The Cremaster Cycle, is the standard work on the Cycle and contains reproductions of production stills, concept drawings and an exegetical essay by Spector, Only The Perverse Fantasy Can Still Save Us. Neville Wakefield has produced The Cremaster Glossary, which is also included in the book.