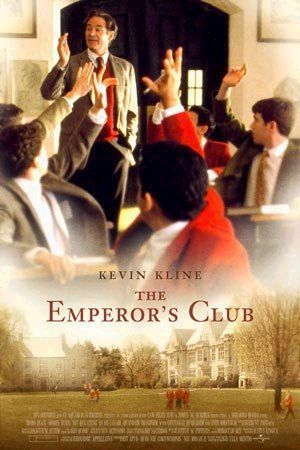 "The Emperor's Club" is a that tells the story of a prep school teacher and his students. Based on 's short story "," the film is directed by and stars . The movie is set at a fictional boys' prep school, St. Benedict's Academy, an American prep school located in Andover, MA. The movie was filmed at in Troy, NY. Kevin Kline is also said to have traveled to Regis High School in to get further character preparation for his role.

William Hundert () is a passionate and principled professor enthusiastic about the start of the school year. His class turns out to be a strict yet inspiring lesson for the new students arriving at St. Benedict's Academy. It is here we are introduced to the party-minded Louis Masoudi (), the introverted Martin Blythe (), and the studious Deepak Mehta (Rishi Mehta), all highly intelligent. He inspires them to study hard in order to become one of the three contestants for The Emperor's Club and be crowned "Mr. Julius Caesar", a competition which pits the top three students of his class in a contest where they will be asked questions regarding the Classics. Blythe mentions that his father was once a "Mr. Julius Caesar".

Hundert quickly gains the respect of his class and the school year gets off to an orderly start. However Hundert finds his tightly-controlled world shaken when a new student, Sedgewick Bell (), walks into his classroom. Sedgewick Bell is the cocky son of a senior senator who possesses none of Hundert's principles. Initially, a fierce battle of wills takes place between Hundert and Bell. Bell's rebellious nature quickly makes him the interest of the class, as he not only is willing to talk back against Hundert, he also freely shares pornographic material and is willing to play hooky and travel to a nearby prep school for girls. Despite Blythe's constant pleas not to break rules, Masoudi and even studious Mehta find themselves enjoying their rebellious tendencies with Bell. Despite this, Hundert is able to humiliate Bell when he asks the class to list, in chronological order, all the Roman emperors. All the other students comply in perfect unison, effectively embarrassing Bell who has not studied the course material. Hundert also makes a trip to Washington, D.C. to meet with Bell's father, the senior Senator from West Virginia. Bell's father is clearly uninterested in his son's character development while at St. Benedict's, giving Hundert some insight into the younger Bell's prior upbringing. Hundert returns to St. Benedict's and finds that Sedgewick Bell has received a phone call from his father, the Senator, who reprimanded him for wasting his time (but not for performing poorly in class). Hundert and Sedgewick begin to develop a close student-teacher relationship as Hundert tries to become a mentor-figure to Bell in order to help change him into a better man. Bell proves to be a bright student and eventually his grades improve enormously. Bell eventually finishes in the top three in Hundert's competition that precedes the Emperor's Club contest, along with fellow classmates Masoudi and Mehta. Bell had actually earned his position at fourth place, until Hundert privately decided to raise his grade on the final essay after reviewing it again, thus moving him above Blythe. Hundert is caught between celebrating Bell's newfound success and feeling guilty when he sees a dejected Blythe sitting all by himself under a tree. This is especially important as it is a break from Hundert's stance on integrity.

The entire school watches the competition, as the three contestants are quizzed by Hundert. After many questions, the confident Masoudi is the first to make a mistake and he sits down. As the competition narrows down to Mehta and Bell, Hundert becomes increasingly suspicious of Bell raising his toga to his head to think. He then asks Bell a question not in the books: "Who was ?", knowing full well that the answer would not be on any materials used to cheat (It was not even in the curriculum) but knowing that Mehta would be able to answer it due to his extracurricular studies. Bell is stumped and Mehta is crowned Julius Caesar of The Emperor's Club. Afterwards, Bell openly admits to Hundert what Hundert had suspected earlier: that Bell cheated by placing notecards on the inside of his toga sleeve. It is revealed in the end, Bell couldn't take the pressure of losing, and like his father, tried everything he could to win it easily. Although Hundert does not reveal this information to anyone else, the trust he once had with Bell is broken. The next couple of scenes show the students graduating to higher grades before finally leaving St. Benedict's Academy. During this time, Hundert regrets not being able to influence Bell more.

Twenty-five years later, Hundert is denied his bid to become headmaster of the school by the board, who feel he doesn't have the ability to drum up financial donations for the school. Hundert immediately resigns. Later he receives an invitation for a class reunion and a chance to meet up with his students at an event (surprisingly) staged by Bell, who is now quite successful. Once reunited with his students, he is impressed that every one of his students from that fateful class had done well since their days at St. Bendict's and all had successful careers. It is also revealed that Hundert, ironically, is the key to gaining a large sum of money to be donated to the school under the circumstances that Hundert would host a "Mr. Julius Caesar" contest rematch between Bell and his fellow alumni Masoudi and Mehta. Before the match Bell talks to Hundert about how his influence had really changed his life and he hopes that he would be able to regain his dignity in the rematch. An enthusiastic Hundert agrees to host once again. And so the Emperor's Club contest is again played, albeit the crowd being the students and their respective family and friends. Masoudi quickly falls on the first question after talking on his cell phone and then declaring himself to be the next Julius Caesar, showing that despite his success, he has forgotten most of his Classics. Again the main competition is between Mehta () and Bell as both still remember (or studied) their lessons from Hundert's class. Sadly, despite Hundert's belief that Bell has changed, he is able to perceive that Bell is cheating, this time through a man telling him answers from the book through an earpiece. Hundert poses another unofficial question, this one regarding the plaque over his door, regarding the identity of . Despite supportive shouts from his classmates that this one is easy and they all know this one, Bell again does not know the answer and loses to Mehta again. Once more, only Hundert is aware that Bell cheated. After the competition ends and Bell recongratulates Mehta as "Julius Caesar", Bell announces that he will be running for a seat in the and stresses the importance of government funding of education. Hundert finally sees that Bell only used the event to drum up support for his campaign and to get financial backings from his old classmates.

Shortly after his announcement, Hundert and Bell run into each other in the bathroom, where Hundert confronts Bell about his immorality. Bell coldly goes on to tell Hundert that it does not matter that he cheated, as life is full of cheaters. Just then, Bell's son comes out of a stall with a shocked expression on his face, and Bell is left to face his son knowing that his father is a cheater. Hundert, realizing again that he has failed Bell, now recognizes the importance of letting Blythe know that he had given away Blythe's seat in the original "Mr. Julius Caesar" contest. Nonetheless, this confession, for Hundert, is not enough to keep him from feeling like a failure as a teacher.

The next day the Bell family smiles and says goodbye to the rest of the class as they are busy planning the campaign. Hundert wakes up the next morning and goes to the dining room expecting one last breakfast with his pupils. Instead he finds an empty room and that they have all left already, only leaving him a message that they wish him well. Hundert dejectedly walks back, only to discover that his former pupils had thrown him a surprise party. All his students except Bell are there including Masoudi, Mehta, and Blythe. The meeting is an exciting event as Hundert and his remaining students talk about how much he has influenced them and how they are grateful that he was their teacher. Hundert finally comes to the realization that while he wasn't able to turn Bell into a better man, he still has influenced a great many of his pupils and he should continue teaching.

Hundert thus returns to St. Benedict's Academy and again teaches Classics to a new class (which is now ). It is also revealed that one of his students is Blythe's son, who is proud that his father was once Hundert's student. When Hundert looks outside his classroom window, he sees a smiling Blythe wave and walk away. He then asks Blythe's son to read the plaque over his door, just as young Blythe did at the beginning of the film.

The film received mixed reviews from critics. On the review aggregator , 50% of critics gave the film positive reviews, based on 123 reviews. [cite web|url=http://www.rottentomatoes.com/m/emperors_club/ |title=The Emperor's Club - Rotten Tomatoes |accessdate=2007-10-01 |publisher=] On , the film had an average score of 49 out of 100, based on 32 reviews. [cite web|url=http://www.metacritic.com/video/titles/emperorsclub |title=Emperor's Club, The (2002): Reviews |accessdate=2007-10-01 |publisher=]