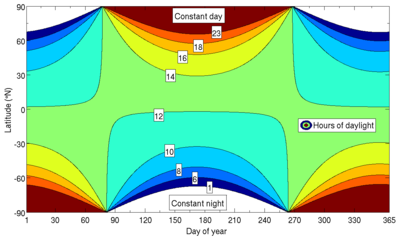 Some interesting facts are as follows: 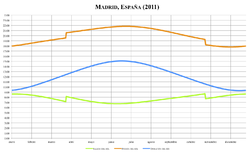 More conveniently, atmospheric refraction is ignored and the center of the sun is often used in place of the upper limb for computing a day's duration. When sunrise and sunset do occur, the day duration can be computed as 2ωo/15°, where ωo is the sunset hour angle in degrees (°) given by the sunset equation. When sunrise and sunset do not occur during the course of a day, the day duration is either 0 or 24 hours.

To considerable accuracy, all the points at the same latitude on the same calendar date can be considered to have the same day length. The contour plot in the figure is computed using the sunrise equation.

With this definition the following features can be observed:

Historical variation of day length because of tidal acceleration

The day length was less in the past. About 320 million years ago there were 400 days in the year.