The schools mascot is the "Hawk", with the school colors being purple, white, and gold.

The core principles of the school are:

In Accordance with Our Mission and Philosophy, the Goals of Chaska High School are:

Each house has two stories and similar design. They are connected by one large hallway. This main hallway is a little less than one quarter mile long. There is also a South Wing of the high school, south of the main hallway, which holds the cafeteria and connects to the activities section of the school. 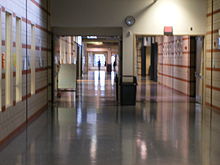 The Chaska High School media center is the school's library and technology center. It has four separate labs; two of which use Dell PCs and two which use Apple computers. The first floor consists of the library proper, as well as all PCs. Second floor houses the Apple computer labs, as well as Jumpstart studios, the semi-weekly school news program. The media center area also holds the copy room, tech support and all other IT services for the school. During the 2007-2008 school year, the Media Center and 2 engineering labs received brand new computers to help enhance the student experience.

This takes up about half the school's area. It consists of the band room, choir room, cafeteria, the auditorium, the large gymnasium, small gymnasium, weight room, locker rooms, additional classrooms, the activities office, athletic locker rooms, and other athletic related areas. It is connected through the blue house and the media center. The cafeteria is one story with a high cone glass roof, but the athletic area is two stories.

Chaska High School employs 'block scheduling,' a method that allows for four classes per day of 90 minutes per block. For the 2009-2010 school year, the District's school board has decided to transition from the block schedule to the "modified block scheduling" currently employed at the nearby Pioneer Ridge Freshman Center; which has now fallen under the name of "Pioneer Ridge Middle School".

Every year the CHS Drama Department stages a fall musical, a spring play, and a collection of student-directed one act plays in the winter.

Plays/musicals produced under the direction of Jim Lund (now directing at Chanhassen High School) include: Godspell, The Twelfth Night, Seussical, The Matchmaker, A Funny Thing Happened On The Way To The Forum, The Hollow, The Pajama Game, Laughing Stock, West Side Story, and The Real Inspector Hound/Black Comedy.

In the fall of 2009, Ms. Jennifer Farrell took over Lund's role as theater director at Chaska High School. Under Farrell's direction, the theater program has produced The Mystery of Edwin Drood, The Crucible, this fall's (2010) Grease, and this spring's (2011) Twelfth Night.

Chaska High School students have many opportunities to be in music. Three choirs, three bands, and many extracurricular groups offer a wide range of music styles and levels. There are three in-school choirs: Varsity Choir, Treble Choir and Concert Choir, and three in-school bands: Concert Band, Symphonic Band and Wind Ensemble. The three choirs are directed by Ms. Shelley Kline, who became the choral director of Chaska High School in 2009. Mrs. Miriam Junker, who retired in 2007, conducted the Concert Band and Wind Ensemble. After Miriam Junker, Mr. Paul Swanson took over the role of conducting the symphonic band, while Mr. Timothy Beckler took over the Wind Ensemble and Concert Band. Timothy Beckler came to Chaska from University of Iowa. After the new Chanhassen High school was built, Mr. Paul Swanson directed the bands at Chanhassen, while Mr. Timothy Beckler directed all bands at Chaska.

The band offers a somewhat more diversified range of extracurriculars. There are three high school level jazz bands: Jazz I, Jazz II and Jazz III. Jazz I is an audition-only group for 9-12, while Jazz II is open to grades 10-12, and Jazz III open to 9th graders. The Chaska High School Pep band plays at the school's hockey, basketball and volleyball games throughout the school year. There is also availability for students to be in the pit orchestra for the drama department's musicals. Today, all extracurricular bands are directed by Mr. Timothy Beckler. The school, and district, is home also to a newly formed orchestral program, which ranges across many grades. In 2007, with the arrival of Mr. Tim Beckler, Chaska reinstated its marching band. The marching band plays at most home football games, and does several halftime shows for those games. Marching band includes a multi-week SPAT Camp before school starts in the fall, where students learn to march and play marching style correctly.