Testify (Rage Against the Machine song)

Testify (Rage Against the Machine song) 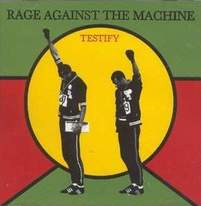 
"Testify" is a single by band off their third studio album "The Battle of Los Angeles".

The song, like many Rage Against the Machine songs, is notable for Tom Morello's unorthodox use of guitar to create unusual sounds. Morello plays the sweeping sound in the song's intro and verse using a mixture of effects and techniques. First, the pedal is set to harmonize a minor seventh above the note being played, and the delay pedal is set to a short, slap-back setting that almost sounds like . With both pickups set to maximum volume, Morello creates the sound by pick the open D string whilst flicking the toggle switch back and forth and using a to shift between the bass and treble frequencies. [ [http://www.musicfanclubs.org/rage/articles/testify.htm rage: Articles/Interviews ] ]

The music video, directed by , features a number of clips showing the two presidential candidates at the time ( and for the ) stating the same policies and views on important issues, and the movie aims to highlight the lack of choice in the US electoral system. This is spoofed in the video as the images of Bush and Gore are morphed together, thereby creating a "mutant" that "appears as two but speaks as one."

Other key themes in the video focus on America's reliance on , with several clips of the , and lines at gas pumps accompanied by the lines "Mass graves for the pump and the price is set." Other clips display modern and the , juxtaposed against images of nations.

Other organizations, topics, and individuals displayed in the video include: , same sex relationships, , , , , , , , , General Norman Schwarzkopf, the Christian Coalition, monster truck rallys, the , and the corporate donations that each candidate has received.

The similarities between the two candidates are displayed through soundbites of their speeches. Among the topics that George W. Bush and Al Gore agree on, as shown in the video: support of the , prosperity through , investing in the future, support of , and a ban on . Each candidate concludes by stating "."

The video ends with a quote from : "If you're not turned onto politics, politics will turn on you."