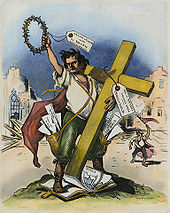 Cynical political cartoon of the speech from the magazine Judge.

The Cross of Gold speech was delivered by William Jennings Bryan at the 1896 Democratic National Convention in Chicago on July 8, 1896.[1][2][3] The speech advocated bimetallism. Following the Coinage Act (1873), the United States abandoned its policy of bimetallism and began to operate a de facto gold standard, which was then modified by the Sherman Silver Purchase Act in 1890. This was followed by the Panic of 1893, which resulted in a depression. In 1896, Bryan's wing of the Democratic Party rejected the policies of Bourbon Democratic President Grover Cleveland and wanted to standardize the value of the dollar to silver and opposed a monometallic gold standard. Despite other economic problems of the 1890s, the mandated purchasing of silver by the United States government is credited in part for reversing the deflation which the U.S. experienced from 1873 to 1896. Bryan would win the Democratic nomination in 1896, but he ultimately lost the general election. 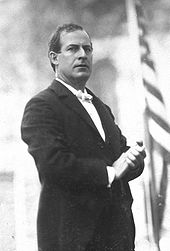 Bryan campaigning on stage a few months after the speech

Backers of a monometallic gold standard felt that protection against inflation was of paramount importance, and they believed that a monometallic gold standard was the best way to achieve this end. Inflation is disadvantageous for creditors, and degrades the value of savings. Saving represents deferred spending and a source of capital for lending.

Despite winning every state of the former Confederacy and all but four states that lay entirely to the West of the Mississippi River, Bryan was beaten in the presidential election by William McKinley. Bryan was defeated again (but more soundly) by McKinley in 1900 and the United States adopted the monometallic gold standard de jure in that year. By the first decade of the twentieth century, among major nations, only China and Hong Kong remained on the silver standard.

The speech was given in the context of a wider debate about bimetallism at the Democratic convention, and so the greater part of Bryan's speech was devoted to responses to other speakers whose contributions have largely been forgotten. Bryan's speech places him in the camp of Western interests (largely farmers and other borrowers) against Eastern interests (moneylenders), in the camp of rural interests against urban interests, and in the camp of economic nationalists against internationalists who were concerned about the U.S. abandoning the gold standard. Bryan's speech cemented his role as a leading voice for economic populism. The speech criticizes an early form of trickle-down economics: "There are two ideas of government. There are those who believe that if you just legislate to make the well-to-do prosperous, that their prosperity will leak through on those below. The Democratic idea has been that if you legislate to make the masses prosperous their prosperity will find its way up and through every class that rests upon it."

The speech, with its allusions to the biblical Crown of Thorns and the Crucifixion of Jesus, gets its popular name from its closing phrase:

"Having behind us the producing masses of this nation and the world, supported by the commercial interests, the laboring interests and the toilers everywhere, we will answer their demand for a gold standard by saying to them: You shall not press down upon the brow of labor this crown of thorns, you shall not crucify mankind upon a cross of gold."

At the conclusion of the speech, Bryan stretched out his arms in a Christ-like manner for five seconds, while the crowd remained quiet. According to the New York World, at that point everyone seemed to go mad at once and shrieked and rushed the stage. The New York Times commented that "a wild, raging irresistible mob" had been unleashed.[4]