Air Algérie is in the process of becoming a member of the SkyTeam airline alliance. Bilateral codeshare agreements, frequent flyer programs and airport lounge agreements with each of the SkyTeam carriers must be in place before it can meet the alliance's membership requirements.[4]

Air Algérie was founded in was formed on 15 March 1947 as the Société Algérienne de Construction Aéronautique (SACA)-Air Algérie. On May 23, 1953, it merged with the Compagnie Air Transport to form the Compagnie Générale de Transports Aériens (CGTA)-Air Algérie. Following independence from France in 1962 the company become Air Algérie (Entreprise Nationale d'exploitation des Services Aériens). In 1963 the Algerian government took possession of 51% of the company assets, increasing its stake to 83% in 1970 and to 100% and nationalisation in 1974, after acquisition of the remaining 17% stake held by Air France. It employs 9,775 staff (at March 2007).[5] Air Algerie is a member of the Arab Air Carriers Organization. Air Algérie is a joint-stock company SPA with a capital of 43.000.000.000 DA.

Modernization of the company 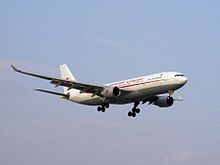 The airline covers a network of 96,000 km. More than 3.000.000 passengers and nearly 20.000 tonnes of cargo are carried every year. In 2003, the number of daily flights in peak periods was 120. Air Algérie has generated almost five billion available seat-kilometres and performed 3.3 billion revenue passenger- kilometres. A few years later, Air Algeria, relieved of the management terminal, became a limited company in 1997 and 2006, its capital amounted to 57 billion dinars (about 560 million euros). With nearly 6 million passengers a year on its regular routes, Air Algérie saw sales go up year after year. Thus, an airline is doing very well. It has modernized its fleet.

The sales network comprises 150 agencies in Algeria and abroad, linked to the booking system and distributed through GDS to which Air Algérie has subscribed. Air Algérie is a Joint Stock Company (J.S.C) the registered capital of which is 43.000.000.000,00 DA. Air Algérie is a company resolutely turned towards Modernity. Air Algérie has made in 2005, a 48.7 billion DA turnover, a 5% progress compared to 2004 and a 8 billion DA net profit. The Company carries annually nearly 3 Millions passengers on its regular services.

Air Algérie has invested 400 million Euros in November, 2010 for the renovation of his fleet for 2011. This investment was modernizing the cabins and image of the aircraft. The company promises to offer a service on board with high technology of last generation in his planes.[6]

Airbus A330-200 Landing in Montréal-Trudeau 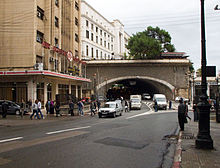 Air Algérie is a joint stock company. The shares are totally owned by the Algerian state. Its Board of Directors is headed by Abdelwahid Bouabdallah, Chairman and Managing Director.

Recently, the Air Algérie was divided into several departments to better meet the expectations of its customers and challenges of global aviation. Now, there are poles separate maintenance, domestic routes, international routes, cargo and service tour operator. Four subsidiaries were established: Technics Air Algérie, Air Algerie Catering, Domestics and Air Algérie Cargo Air Algérie. Soon will see the launch of Air Algeria Plus is a customer loyalty with discounts on flights, car rental or hotel reservations. Company to the modern fleet, the balance sheets balanced, Air Algérie is resolutely turned towards the future.

Between 1947 and 1974 Air Algérie was a property of Air France. In the same year the Algerian State bought 100% of the company.

In 1990 Air Canada attempted to buy the company but did not manage to come to an agreement with the Algerian State. a businessman, Rafik Khalifa who owns Khalifa Airways expressed his interest on acquiring Air Algérie. The businessman offered a great sum of money and many times the value of Air Algérie, but a year after the negotiations the businessman was accused of money embezzlement of more than EUR 1 Billion, and forced Khalifa Airways to cease its operations.

Air Algerie has no intention on hastening the privatization of the company, but there are already three companies that want to acquire the company,which are Air France, Lufthansa and Turkish Airlines.

Air Algerie logo was created in 1966 in Algiers and since then has never gone to change or modify. It is a historical logo that despite the years pass still gives an impression of a modern logo on home time. Never revealed what the true meaning of this logo, some say it's a plane, others say it is a bird and others say it is very similar to peace symbol. This logo is one of 10 logos of the commercial aviation in the world most original and the most historic in the world after that of Lufthansa. On June 21, 2011 the company has officially informed that the logo is a Swallow. This bird is a national Algerian symbol. 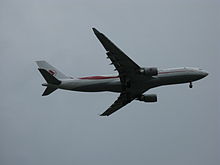 Air Algerie has codeshare agreement with the following airlines:

Air Algérie possesses its own catering service, where more than 2,000 employees prepare the plates of all the Air Algérie's flights that depart from Algeria to another destination. Air Algérie also works with other companies of catering for example Gate Gourmet and LSG Sky Chefs.[7]

As of April 2011, the Air Algérie fleet consists of the following aircraft with an average age (passenger airplanes only) of 8 years:[8]

The airline has plans to add more longhaul aircraft to its fleet and foresees reaching 50 aircraft by 2025.[10]

Air Algérie is considering the purchase of 10 Boeing 787, once made this purchase the company plans to open new routes. In a statement the CEO of Air Algérie made ​​it clear that once made ​​the order of these aircraft would be arriving recently in 2016. The New York route will be opened in 2012 and will be operated by Airbus A330-200.

Over the years, Air Algérie has operated the following aircraft types: 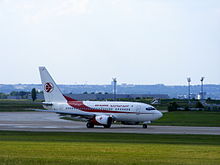 Air Algérie offers two types of cabins. The Airbus A330-200 is not equipped with the AVOD entertainment system, but cabin refurbishment is being considered. The Boeing 767–300 and Boeing 737–800 are equipped with audio systems.