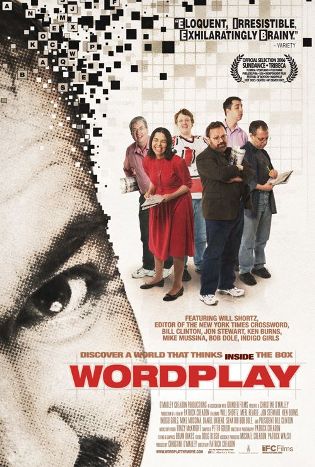 "Wordplay" is a 2006 directed by . It features , the editor of the "" , crossword constructor , and many other noted crossword solvers and constructors. The second half of the movie is set at the 2005 (ACPT), where the top solvers compete for a prize of $4000.

The movie focuses on the following crossword solvers:
*Ellen Ripstein: editor living in and 2001 ACPT champion. She is also known for her baton twirling.
*Trip Payne: professional puzzlemaker living in and three-time ACPT Champion. He held the record as the youngest champion after winning the tournament in 1993 at the age of 24.
*Tyler Hinman: student at in . At the 2005 ACPT, he challenged Trip Payne for the title of youngest champion ever.

*Jon Delfin: living in New York City and seven-time ACPT champion.
*Al Sanders: project manager at in . He is a frequent finalist at the ACPT.

The movie contains appearances by many celebrity fans of the "Times" puzzle, including , , , , , and the .

Wordplay features a theme song, "Every Word," written and performed by of The Jayhawks. [http://www.youtube.com/watch?v=BuIMu25VNGw] [http://minnesota.publicradio.org/display/web/2006/06/02/gary_louris/] The Wordplay DVD features a music video of "Every Word." [http://www.wordplaythemovie.com/]