Caption = Fasciculus cuneatus is 3b, in blue at upper right. 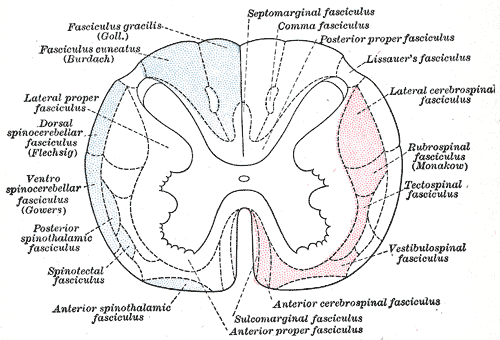 Caption2 = Diagram of the principal fasciculi of the spinal cord.
System =
Precursor =
MeshName =
MeshNumber =
DorlandsPre = f_03
DorlandsSuf = 12355858
The fasciculus cuneatus (tract of Burdach, named for ) is a bundle of nerves in the spinal cord which primarily transmits information from the arms. It is part of the .

The fasciculus cuneatus is triangular on transverse section, and lies between the and the , its base corresponding with the surface of the .

Its fibers, larger than those of the fasciculus gracilis, are mostly derived from the same source, viz., the .

Some ascend for only a short distance in the tract, and, entering the , come into close relationship with the cells of the ; while others can be traced as far as the , where they end in the and .

The 3rd order neurons carry the received signals to the where the signals, in the form of s are interpreted.