M-44 (Michigan highway)
This article is about the state highway in Michigan; for other uses, see M44 (disambiguation)

M-44 is a 37.463-mile (60.291 km) state trunkline highway in the western region of the US state of Michigan. It runs northward from the intersection of M-11 (28th Street) and M-37 toward the Rockford area. The highway then turns eastward to Belding, and it ends six miles (10 km) north of Ionia at M-66. M-44 is known in Grand Rapids as the "East Beltline" and intersects with its related highway, Connector M-44, in Plainfield Township. This highway runs concurrently with M-37 between M-11 and Interstate 96 (I-96).

As a state highway, M-44 dates back to around July 1, 1919, and it was routed along a section of its modern route at that time. The eastern end was altered in the late 1920s, and the western end was extended to the Grand Rapids area in the 1970s. For over 20 years, M-44 was truncated to remove the M-37 concurrency. Since 2003 though, the highway has terminated at the intersection with 28th Street. 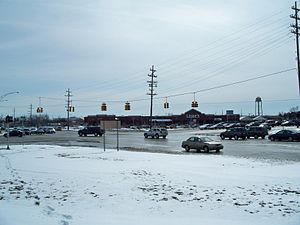 M-44 starts at the intersection of 28th Street and East Beltline Avenue in Kentwood. M-11 runs east and west along 28th Street and M-37 runs south along Broadmoor Avenue as the continuation of East Beltline. M-44 and M-37 run together on East Beltline Avenue north from this intersection, which is also the location of the Woodland Mall in Kentwood. From here north, M-37/M-44 runs along a four-lane divided boulevard through the campus of Calvin College. East Beltline passes through suburban residential areas near the east end of Reeds Lake and M-21's western terminus at Fulton Street. Just north of this intersection is an interchange with I-96 at exit 38. M-37 leaves the roadway to run along I-96 while M-44 continues northward along East Beltline Avenue.[3][4] All of M-44 to this point is listed on the National Highway System,[5] a network of roadways important to the nation's economy, defense, and mobility.[6]

North of the interchange, M-44 passes the Frederik Meijer Gardens and Sculpture Park and the campus of Cornerstone University. The area around the highway is mixed businesses and office parks north to Knapp Street, and then residential north of there. At Plainfield Avenue, M-44 meets CONN M-44 and crosses the Grand River. M-44 turns eastward near the south side of Rockford and runs through suburban residential areas near Lake Bella Vista, Silver and Bostwick lakes. East of here, the environs transition to rural farmland and the highway crosses the Kent–Ionia county line between Grattan and Cooks Corners, where it meets M-91 west of Belding. The highway continues east through town, where it crosses the Flat River, and ends at M-66 north of Ionia.[3][4]

M-44 Connector, or CONN M-44, is a 4.185-mile (6.735 km) connector route state trunkline highway running along Plainfield Avenue in the Grand Rapids area.[2] It connects I-96/M-37 near Lamberton Lake with M-44 running along East Beltline Avenue near the Grand River. In between, the highway passes through a commercial area. North of 5 Mile Road, Plainfield Avenue takes on a more suburban residential character. There are more business again at the northern end by Versluis Lake.[19] CONN M-44 was formed in 1969 when the US 131 freeway was completed from I-96/M-37 to 14 Mile Road near Rockford. US 131 along Plainfield Avenue was redesignated as CONN M-44 to connect I-96/M-37 with M-44.[13][14]