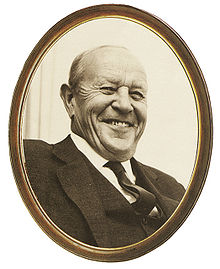 Odd Gleditsch, Sr. (2 October 1894 – 17 January 1990) was a Norwegian business entrepreneur. The founder of the paint company Jotun, he began as a paint distributor but then turned to manufacturing the paint himself. He was CEO of the company from 1926 to 1967.

He was born in Sandefjord as a son of whaler Einar S. Gleditsch (1862–1913) and Maren Olea Kverne (1862–1933).[1] He was a second cousin of Rolf, Ellen, Kristian and Henry Gleditsch, and a first cousin once removed of Kristen Gran Gleditsch and Jens Gran Gleditsch.[2]

After finishing middle school he spent six seasons as a whaler in the Southern Ocean.[1] Whaling was the foremost business in his hometown Sandefjord.[4] However, during World War I stock market speculation became more lucrative. Gleditsch tried his luck from 1916, but the market crashed in 1918. In 1920 he opened shop as a colourman and seller of ship equipment. In 1926 he saw an opportunity to manufacture the paint he sold, as he took over the factory Jotun from Johan Bryde. The factory had gone bankrupt in 1925, but was now resurrected under the name Jotun Kemiske Fabrik.[1]

In 1931 the product Arcanol was introduced, starting the upward trend for Jotun. The company opened a research laboratory in 1950, and expanded with factories in the Kingdom of Libya in 1962 and Thailand in 1967. In 1967 Odd Gleditsch, Jr. became CEO. Gleditsch Sr. continued as a board member until 1971.[1] In 1972, through a merger, Jotun Kemiske Fabrik changed its name to Jotun.[5]

He was also a board member of the Federation of Norwegian Industries and Framnæs Mekaniske Værksted, chairman of Privatbanken i Sandefjord and A/S Kosmos and honorary member of the Norwegian Association of Hunters and Anglers. In 1965 he was decorated as a Knight, First Class of the Royal Norwegian Order of St. Olav. He died in January 1990 in Sandefjord.[1]