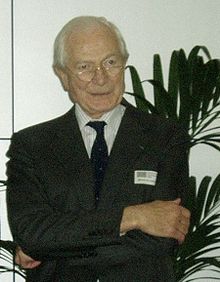 John Michael Broadbent MW (born 2 May 1927 in Yorkshire, England) is a British wine critic, writer and auctioneer in a capacity as a Master of Wine. He is a renowned authority on wine tasting and old wines.[1]

Broadbent was educated at Oundle School and trained as an architect but changed career, in 1952, at the age of twenty-five, and entered the wine trade first with Layton’s, next with the West End Wine merchants, Saccone and Speed, and, from 1955 with Harvey's of Bristol. In 1960 he received the qualification of Master of Wine.[2][3]

In 1966 he resigned as Sales Director to start wine auctions at the London auction house Christie's which would lead him to trade in and taste a greater number of fine and rare wines than anyone else in the world. His tasting notes are estimated to number over 90,000 in more than 140 notebooks.[3] Until 1992 he was the senior director of Christie's wine department,[1] and he remained a senior consultant with the firm until 2009.

As opposed to American wine critic Robert Parker, Broadbent does not give wines a numerical score, but employs a system that awards a wine up to five stars.[3]

As a wine writer, Broadbent is renowned for important publications of his records from a life of tasting wine.[4] The Great Vintage Wine Book is a reference work with tasting notes from more than 6,000 wines dating back to the 17th century.[5] In addition to authoring several wine books, he has been a regular contributor to the wine magazines Vinum and Falstaff , and still writes monthly for Decanter since its inception in 1975.[3] Broadbent has lectured on the subject since the mid 1950s.

In 1979 Broadbent was appointed Chevalier of the Ordre National du Mérite, as well as an honorary member of the Académie du Vin de Bordeaux and numerous other French wine associations. Among other positions held, Broadbent has been chairman of The Institute of Masters of Wine in 1970, Master of the Worshipful Company of Distillers, president of The International Wine and Food Society in 1986, president of the Wine & Spirit Education Trust (WSET) 2007-2009 and Chairman of The Wine & Spirit Trades' Benevolent Society in 1991, and has stood as Sheriff of the City of London in 1993.[3] In 2006 he participated as a judge in the 30th anniversary repetition of the original "Judgment of Paris" wine tasting competition.

Michael Broadbent is married to Daphne Broadbent. Their son Bartholomew Broadbent[6] is a wine importer in the United States who also makes Port, Madeira and Vinho Verde in Portugal and is a 50% owner of Dragon's Hollow winery in China. Michael Broadbent's daughter, Emma Arbuthnot, is a District Judge in England, married to the Right Honourable MP James Arbuthnot P.C. M.P.

Broadbent was also among the wine dignitaries whose association with alleged wine forger Hardy Rodenstock during the 1980s led to some embarrassment.[7] In July 2009 it was announced that Broadbent would sue Random House, the publishers of The Billionaire's Vinegar by Benjamin Wallace, an account of the "Jefferson bottles affair" and its court cases, for defamation of character, on claims that the book asserts Broadbent invented an auction bid and contains references to him colluding with Rodenstock. The suit was filed in the United Kingdom, and Random House initially stated it did not believe it had defamed Broadbent and would defend the lawsuit.[8]

In October 2009, Random House accepted that the allegations in the book were without foundation, removed the book from sale in the UK, made a full apology and paid Broadbent an undisclosed sum in damages.[9][10] It was also reported that Wallace was not a party to the lawsuit or settlement, that Random House would be making no changes to the book, and that it would continue to publish the book in all territories outside the jurisdiction of the UK.[11][12]