A tea house or tearoom is a venue centered on drinking tea. Its function varies widely depending on the culture, and some cultures have a variety of distinct tea-centered houses or parlors that all qualify under the English language term "tea house" or "tea room." 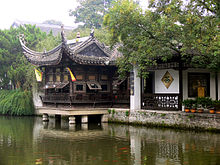 A tea house located at Nanjing 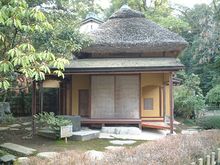 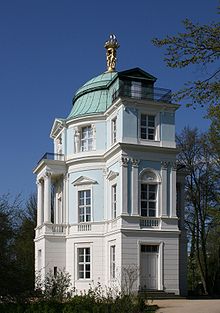 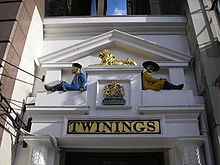 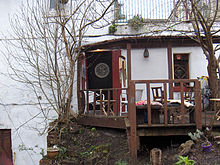 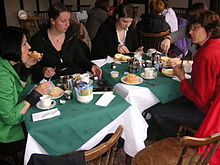 Tea at The Orchard, Grantchester, founded 1897 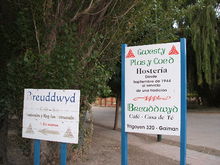 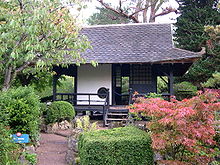 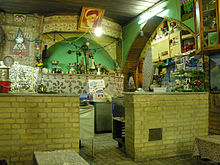 In Central Asia this term could refer to Shayhana in Kazakh, Chaykhana in Kyrgyz and Chayhona in Uzbek which literally means a tea room.

In China, a tea house (茶館, "cháguăn" or 茶屋, "cháwū") is traditionally quite similar to the American "cafe", albeit centered around tea rather than coffee. People gather at tea houses to chat, socialize, and enjoy tea. Young people often meet at tea houses for dates. Especially, the Guangdong (Cantonese) style teahouses are very famous abroad, such as in New York, San Francisco, etc. These tea houses not only serve tea, but also dim sum (點心), people can eat different kinds of food when they drink tea. People call these kinds of tea houses “茶樓, chálou”.

In Japan a tea house can also refer to a place of entertainment with geisha. These kinds of tea houses, called ochaya (お茶屋), are typically very exclusive establishments. The most notable ochaya is the Ichiriki Ochaya.

There are many tea houses in Tajikistan. The largest tea-houses are Orient Tea house or Chinese Tea house, Orom Tea house in (Isfara) town. On the 15th anniversary of Independence in Tajikistan, the people of Isfara town presented Isfara Tea house to Kulyab city for its 2700th anniversary on September 2006. Dushanbe, Tajik capital city also presented a tea-house to its sister city Boulder[1].

In Egypt, coffee houses are called 'ahwa' and combine serving coffee as well as tea and tisanes. Tea is called "shai", and coffee is also called "ahwa". Finally, tisanes as karkade is also highly popular.[1]

In Germany, tea house (also called Teehaus) was famous during the Third Reich era where the German Dictator Adolf Hitler used to have his daily walk and tea at a Teehaus on Mooslahnerkopf hill near his residence Berghof, in the Bavarian Alps. Hitler's tea house was a cylindrical structure built in the woods where Hitler, his close friends, party colleagues and secretaries used to have their daily afternoon walk followed by tea. It seems having a separate tea house was a culture in many countries in Europe.

Latvia is located at the crossroads of trade routes between Europe and the East, Russia. This strongly influenced the culture of the country. Tea came here both from the East and West. One example of mixed tea is a new type of tea room - Club tea culture. For example - a tea club Goija

Tea drinking is a pastime closely associated with the English.[2] Tea first arrived in England during Cromwell's protectorate and soon became the national drink. Tea drinking became a national pastime for the English. As early as 1784, Rochefoucauld noted that "[t]hroughout the whole of England the drinking of tea is general". Nevertheless, Anna Russell, Duchess of Bedford, was credited with the invention of afternoon tea in 1840.[3] It spread to other parts of English society by 1864, when the female manager of London's Aerated Bread Company is attributed with innovating the first commercial public tearoom.[4]

Thomas Twining opened the first known tea room in 1706, which remains at 216 Strand, London today. In 1787, the company created its logo, still in use today, which is thought to be the world's oldest commercial logo that has been in continuous use since its inception.[5] Under Associated British Foods since 1964, Stephen Twining now represents the company's ten generations. In 2006, Twinings celebrated its 300th anniversary with a special tea and associated tea caddies. Twining's is a Royal Warrant holder (appointed by HM The Queen).

There is a long tradition of tea rooms within London hotels, for example, Browns hotel which has been serving tea in its tea room for over 170 years.[6]

In the U.K., Canada and the U.S., a tearoom is a small room or restaurant where beverages and light meals are served, often catering chiefly to women and having a sedate or subdued atmosphere. A customer might expect to receive cream tea or Devonshire tea, often served from a china set, and a scone with jam and clotted cream – alternatively a High tea may be served. In Scotland teas are usually served with a variety of scones, pancakes, (Scottish) crumpets and other cakes.

The popularity of the tearoom rose as an alternative to the pub during the temperance movement in the 1830s. The form developed in the late 19th century, as Catherine Cranston opened the first of what became a chain of Miss Cranston's Tea Rooms in Glasgow, Scotland, and similar establishments became popular throughout Scotland. In the 1880s, fine hotels in both the United States and England began to offer tea service in tea rooms and tea courts, and by 1910 they had begun to host afternoon tea dances as dance crazes swept both the U.S. and the UK. Tea rooms of all kinds were widespread in Britain by the 1950s, but in the following decades cafés became more fashionable, and tea rooms became less common.

In a related usage, a tearoom may be a room set aside in a workplace for workers to relax and (specifically) take refreshment during work-breaks. Traditionally a staff member serving food and beverages in such a tearoom would have been called a tea lady.

Around the world, the term "tea house" or "tea room" may be used to refer to a restaurant or Salon de Thé. They are also present in the Middle East, notably in Iran and Turkey. Such tea-houses may be referred to as "Chaee-Khaneh", or in Turkish, "çayhane" - literally, the 'house of tea'. These tea houses usually serve several beverages, (tea, coffee), and some serve Hookah. Notable institutions include New York's venerable Russian Tea Room, and Glasgow's Willow Tearooms and Tchai-Ovna. "Tea house" may also be used synonymously (or confused) with "tea room", a gay slang term referring to a venue where public sex occurs.[citation needed]