Minot State University was founded in 1913 and has evolved from a normal school to a Carnegie Master’s I institution. Three colleges comprise the university’s academic offerings: Arts and Sciences, Business, and Education and Health Sciences. Nine master’s degrees and one education specialist degree are offered in such areas as communication disorders, management, and mathematics. There is a mix of liberal arts and professional programs offering more than 60 majors at the undergraduate level. Minot State University is a member of the North Dakota University System, which comprises eleven institutions representing doctoral, master, baccalaureate, and community colleges. The State Board of Higher Education consists of nine members and is the governing board of the System. Minot State University has a Board of Regents acting as an advisory board and champion for the institution.

Minot State University's mascot is the Beaver. The school colors are Red and Green (though occasionally Maroon and/or White trim is used). The campus newspaper is called the Red and Green. 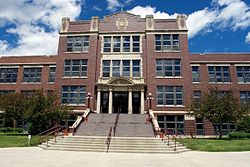 Minot State University is a regional, public institution located in the northwest region of North Dakota, serving students from Minot, the region, state, nation, and other countries. Undergraduate and graduate courses and programs are offered on campus and at a distance, through face-to-face, online, and alternative modes of delivery. Non-credit and professional training and experiences are offered to students and community members.

Committed to high academic standards and professional support for students, the university is dedicated to student success, engaged and life-long learning, advancement of knowledge, effective student service, and development of students of character. These commitments are grounded in effective and motivated teaching and learning, scholarship, and service. General studies and a variety of programs are offered in the arts and sciences, business, and education and health sciences. A wide range of student support services is provided to on-campus and off- campus students.[2]

Former Sen. Byron Dorgan was the legislative sponsor of the JCEMP Fellowship

Minot State University’s College of Business hosts the country’s only Department of Labor Job Corps Fellowship. Since its inception in 2001, the Job Corps Executive Management Program fellowship has prepared Job Corps staff for senior-level positions by bestowing Master's degrees in either Information Systems (MSIS) or Management (MSM) after completion of accelerated courses. The fellowship is funded by a contract with the United States Department of Labor and earmark legislation sponsored by Former U.S. Senator Byron Dorgan. To date, the selective fellowship has enrolled over 100 students from nearly every state who come to Minot, ND, to start their JCEMP experience.[3][4]

Completed the spring of 1992, the Gordon B. Olson Library presently serves an enrollment of more than 3,000 students. The three story facility features seating for 800 students, room for more than 500,000 volumes, as well as computer labs, and a microforms area.

Dr. Gordon B. Olson came to Minot State University during the summer of 1967 and led the university through a period of growth and change. In 1967 enrollment was slightly more than 2,000. During Dr. Olson's tenure, MSU added a significant number of undergraduate and graduate programs. New undergraduate degrees included nursing, social work, and criminal justice. Graduate programs expanded from only one program in 1967 to 13 programs this year. Each of these programs addresses societal needs and the needs of students who pursue careers in these fields.[5]

Minot State University athletics compete in the Dakota Athletic Conference (DAC) which is a part of the National Association of Intercollegiate Athletics (NAIA). In January 2011, MSU was admitted to the NCAA Division II Northern Sun Intercollegiate Conference.[6]

In January 2011, it was announced that Minot State would be joining the Northern Sun Conference in NCAA Division II in 2012.