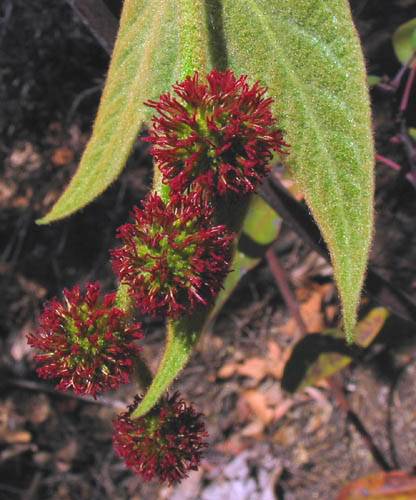 California Sycamore, also called Western Sycamore or Aliso, is a Plane tree, with the botanic name of "Platanus racemosa". It has palmately lobed and ball-like, hairy clusters, and bark that flakes off in large patches. It is informally also called "buttonball" or "buttonwood".

In keeping with its size, the California sycamore has quite large leaves. The trunk of a Sycamore is usually divided into several large, secondary trunks. Its bark is speckled white and brown, with darker bark of older trees peeling away from the lighter-colored and younger bark. Typically, the Sycamore grows on , , and on the banks of . Its tough and coarse-grained wood is difficult to split and work. It has various uses, including acting as meat preparation block for . Many small birds feed on its fruit, and several mammals eat its twigs and bark.