The Myth of Sisyphus

The Myth of Sisyphus

The Myth of Sisyphus is a philosophical essay by Albert Camus. It comprises about 120 pages and was published originally in 1942 in French as Le Mythe de Sisyphe; the English translation by Justin O'Brien followed in 1955.

In the essay, Camus introduces his philosophy of the absurd: man's futile search for meaning, unity and clarity in the face of an unintelligible world devoid of God and eternal truths or values. Does the realization of the absurd require suicide? Camus answers: "No. It requires revolt." He then outlines several approaches to the absurd life. The final chapter compares the absurdity of man's life with the situation of Sisyphus, a figure of Greek mythology who was condemned to repeat forever the same meaningless task of pushing a boulder up a mountain, only to see it roll down again. The essay concludes, "The struggle itself...is enough to fill a man's heart. One must imagine Sisyphus happy."

The essay is dedicated to Pascal Pia and is organized in four chapters and one appendix.

Camus undertakes to answer what he considers to be the only question of philosophy that matters: Does the realization of the meaninglessness and absurdity of life necessarily require suicide?

He begins by describing the absurd condition: much of our life is built on the hope for tomorrow yet tomorrow brings us closer to death and is the ultimate enemy; people live as if they didn't know about the certainty of death; once stripped of its common romanticisms, the world is a foreign, strange and inhuman place; true knowledge is impossible and rationality and science cannot explain the world: their stories ultimately end in meaningless abstractions, in metaphors. "From the moment absurdity is recognized, it becomes a passion, the most harrowing of all."

It is not the world that is absurd, nor human thought: the absurd arises when the human need to understand meets the unreasonableness of the world, when "my appetite for the absolute and for unity" meets "the impossibility of reducing this world to a rational and reasonable principle."

He then characterizes a number of philosophies that describe and attempt to deal with this feeling of the absurd, by Heidegger, Jaspers, Shestov, Kierkegaard and Husserl. All of these, he claims, commit "philosophical suicide" by reaching conclusions that contradict the original absurd position, either by abandoning reason and turning to God, as in the case of Kierkegaard and Shestov, or by elevating reason and ultimately arriving at ubiquitous Platonic forms and an abstract god, as in the case of Husserl.

For Camus, who set out to take the absurd seriously and follow it to its final conclusions, these "leaps" cannot convince. Taking the absurd seriously means acknowledging the contradiction between the desire of human reason and the unreasonable world. Suicide, then, also must be rejected: without man, the absurd cannot exist. The contradiction must be lived; reason and its limits must be acknowledged, without false hope. However, the absurd can never be accepted: it requires constant confrontation, constant revolt.

While the question of human freedom in the metaphysical sense loses interest to the absurd man, he gains freedom in a very concrete sense: no longer bound by hope for a better future or eternity, without a need to pursue life's purpose or to create meaning, "he enjoys a freedom with regard to common rules".

To embrace the absurd implies embracing all that the unreasonable world has to offer. Without a meaning in life, there is no scale of values. "What counts is not the best living but the most living."

Thus, Camus arrives at three consequences from the full acknowledging of the absurd: revolt, freedom and passion.

How should the absurd man live? Clearly, no ethical rules apply, as they are all based on higher powers or on justification. "Integrity has no need of rules." 'Everything is permitted' "is not an outburst of relief or of joy, but rather a bitter acknowledgment of a fact."

Camus then goes on to present examples of the absurd life. He begins with Don Juan, the serial seducer who lives the passionate life to the fullest. "There is no noble love but that which recognizes itself to be both short-lived and exceptional."

The next example is the actor, who depicts ephemeral lives for ephemeral fame. "He demonstrates to what degree appearing creates being." "In those three hours he travels the whole course of the dead-end path that the man in the audience takes a lifetime to cover."

Camus' third example of the absurd man is the conqueror, the warrior who forgoes all promises of eternity to affect and engage fully in human history. He chooses action over contemplation, aware of the fact that nothing can last and no victory is final.

Here Camus explores the absurd creator or artist. Since explanation is impossible, absurd art is restricted to a description of the myriad experiences in the world. "If the world were clear, art would not exist." Absurd creation, of course, also must refrain from judging and from alluding to even the slightest shadow of hope.

He then analyzes the work of Dostoyevsky in this light, especially The Diary of a Writer, The Possessed and The Brothers Karamazov. All these works start from the absurd position, and the first two explore the theme of philosophical suicide. But both The Diary and his last novel, The Brothers Karamazov, ultimately find a path to hope and faith and thus fail as truly absurd creations.

Chapter 4: The Myth of Sisyphus 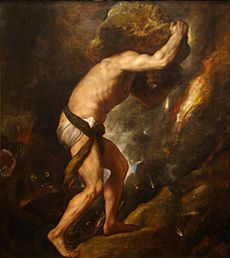 In the last chapter, Camus outlines the legend of Sisyphus who defied the gods and put Death in chains so that no human needed to die. When Death was eventually liberated and it came time for Sisyphus himself to die, he concocted a deceit which let him escape from the underworld. Finally captured, the gods decided on his punishment: for all eternity, he would have to push a rock up a mountain; on the top, the rock rolls down again and Sisyphus has to start over. Camus sees Sisyphus as the absurd hero who lives life to the fullest, hates death and is condemned to a meaningless task.

Camus presents Sisyphus's ceaseless and pointless toil as a metaphor for modern lives spent working at futile jobs in factories and offices. "The workman of today works every day in his life at the same tasks, and this fate is no less absurd. But it is tragic only at the rare moments when it becomes conscious."

Camus is interested in Sisyphus' thoughts when marching down the mountain, to start anew. This is the truly tragic moment, when the hero becomes conscious of his wretched condition. He does not have hope, but "[t]here is no fate that cannot be surmounted by scorn." Acknowledging the truth will conquer it; Sisyphus, just like the absurd man, keeps pushing. Camus claims that when Sisyphus acknowledges the futility of his task and the certainty of his fate, he is freed to realize the absurdity of his situation and to reach a state of contented acceptance. With a nod to the similarly cursed Greek hero Oedipus, Camus concludes that "all is well," indeed, that "One must imagine Sisyphus happy."

The essay contains an appendix titled "Hope and the Absurd in the work of Franz Kafka". While Camus acknowledges that Kafka's work represents an exquisite description of the absurd condition, he maintains that Kafka fails as an absurd writer because his work retains a glimmer of hope.