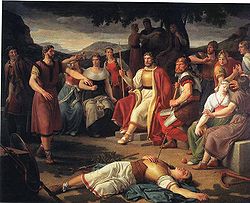 Æsir gathered around the body of Baldur. Painting by Christoffer Wilhelm Eckersberg 1817.

In Old Norse, áss (or ǫ́ss, ás, plural æsir; feminine ásynja, plural ásynjur) is the term denoting a member of the principal pantheon in Norse paganism. This pantheon includes Odin, Frigg, Thor, Baldr and Tyr. The second pantheon comprises the Vanir. In Norse mythology, the two pantheons wage the Æsir-Vanir War‎, which results in a unified pantheon.

The cognate term in Old English is ōs (plural ēse) denoting a god in Anglo-Saxon paganism. The Old High German is ans, plural ensî.[1] The Gothic term is *ans (based only on Jordanes who glossed anses with uncertain meaning, possibly 'demi-god' and presumably a Latinized form of actual plural *anseis).[2] The reconstructed Proto-Germanic form is *ansuz (plural *ansiwiz). The a-rune ᚫ was named after the æsir.

Unlike the Old English word god (and Old Norse goð), the term ōs (áss) was never adopted into Christian use and survived only in a secularized meaning of "pole, beam, stave, hill" or "yoke".

The word áss, Proto-Germanic *ansuz, is believed to be derived from Proto-Indo-European *ansu-, related to Sanskrit asura and Avestan ahura, both from Indo-Iranian *ásura, with the root *n̥su-. Indo-Iranian *n̥su- can be considered a zero-grade equivalent of Germanic *ansuz-, and with it could be reconstructed to derive from Proto-Indo-European *h2ensu-.

The feminine's -ynja suffix is known from a few other nouns denoting female animals, such as apynja "female monkey", vargynja "she-wolf". The word for "goddess" is not attested outside of Old Norse, but since the -ynja suffix is cognate to Old High German -inna (Modern German -in), an Old High German *ansinna has been reconstructed, from a Proto-Germanic *ansunja.[3]

The latinization of Danish Aslak as Ansleicus[4] indicates that the nasalization in the first syllable persisted into the 9th century.

The cognate Old English form to áss is ōs, preserved only as a prefix Ōs- in personal names and some place names, and as the genitive plural ēsa (ēsa gescot and ylfa gescot, "the shots of anses and of elves", jaculum divorum et geniorum). Jordanes has anses for the gods of the Goths.[5] The Proto-Germanic word was *ansu-z, with a plural ''*ansiwiz. The (reconstructed) Old High German terms given by Grimm are ans, plural anseis, ensî. Old Saxon ôs, plural ês.

whether because the mighty gods were thought of as joist, rafter and ceiling of the sky, or that the notions of jugum and mountain-ridge were associated with them, for âs is especially used of jugum terræ, mountain-ridge"[6]

Anderson, in his translation of the Prose Edda (1897), similarly states that, "in this latter sense, the gods are the pillars of the universe," and notes that the sense "mountain-ridge" of ás had been compared to Strabo's Aspargum in the Caucasus (as "the Asburg or castle of the asas") "by those who look for historical fact in mythological tales".

Grimm further notes a resemblance to the name of the gods of the Etruscans reported by Suetonius and Hesychius, æsares or æsi. He notes that Etruscan religion, as well as Greek (Dodekatheon) and Roman polytheism, supposed a circle of twelve superior beings closely "bound" together, as it were forming a fasces, in Rome known as the dii consentes paralleling the Eddic expressions höpt and bönd "bond" for the Æsir.

The interaction between the Æsir and the Vanir has provoked an amount of scholarly theory and speculation. While other cultures have had "elder" and "younger" families of gods, as with the Titans versus the Olympians of ancient Greece, the Æsir and Vanir were portrayed as contemporaries. The two clans of gods fought battles, concluded treaties, and exchanged hostages (Freyr and Freyja are mentioned as such hostages). While still in their youth, Odin and his brothers were said to have participated in the Trojan war fighting for the Trojans. This rumor may have started because Æsir sounds a lot like Asia.

An áss like Ullr is almost unknown in the myths, but his name is seen in a lot of geographical names, especially in Sweden, and may also appear on the 3rd century Thorsberg chape, suggesting that his cult was widespread in prehistoric times.

The names of the first three Æsir in Norse mythology, Vili, Vé and Odin all refer to spiritual or mental state, vili to conscious will or desire, vé to the sacred or numinous and óðr to the mantic or ecstatic.

A second clan of gods, the Vanir, is also mentioned in Norse mythology: the god Njord and his children, Freyr and Freyja, are the most prominent Vanir gods who join the Æsir as hostages after a war between Æsir and Vanir. The Vanir appear to have mainly been connected with cultivation and fertility and the Æsir were connected with power and war. The Æsir and Vanir may correspond to the Indo-Iranian and vedic Asuras and Devas.

In the Eddas, however, the word Æsir is used for gods in general, while Asynjur is used for the goddesses in general. For example, in the poem Skírnismál, Freyr was called "Prince of the Æsir". In the Prose Edda, Njord was introduced as "the third among the Æsir", and among the Asynjur, Freyja is always listed second only to Frigg.

In surviving tales, the origins of many of the Æsir are unexplained. Originally, there are just three: Odin and his brothers Ve, and Vili. Odin's sons by giantesses are naturally counted as Æsir. Heimdall and Ullr's connection with the Æsir is not clearly mentioned. Loki is a giant with no evidence of being worshipped, and Njord is a Vanir hostage, but they are often ranked among the Æsir.

Given the difference between their roles and emphases, some scholars have speculated that the interactions between the Æsir and the Vanir reflect the types of interaction that were occurring between social classes (or clans) within Norse society at the time.[7] According to another theory, the Vanir (and the fertility cult associated with them) may be more archaic than that of the more warlike Æsir, such that the mythical war may mirror a half-remembered religious conflict.[8] Another historical theory is that the inter-pantheon interaction may be an apotheosization of the conflict between the Romans and the Sabines.[9] Finally, the noted comparative religion scholar Mircea Eliade speculated that this conflict is actually a later version of an Indo-European myth concerning the conflict between and eventual integration of a pantheon of sky/warrior/ruler gods and a pantheon of earth/economics/fertility gods, with no strict historical antecedents.[10]

Gylfaginning (20.ff) gives a list of twelve male aesir, not including Odin their chief, nor including Loki, "whom some call the backbiter of the asas":

Then said Gangleri: Which are the Æsir in whom it is man’s duty to believe? Har answers: Twelve are the Æsir of the race of gods. Then said Jafnhar: The Asynjur are not less holy and they are not less capable. Then said Thrithi: Odin is the greatest and oldest of the Æsir. ... Frigg is his wife, and she knows the fate of men, although she tells not thereof. ...

(33.) There is yet one who is numbered among the asas, but whom some call the backbiter of the asas. He is the originator of deceit, and the disgrace of all gods and men. His name is Loki, or Lopt. ... His wife hight Sigyn, and their son, Nare, or Narfe.

Ganglere asked: Which are the goddesses? Har answered:

Sol and Bil are numbered among the goddesses, but their nature has already been described.

The a-rune ᚫ, Younger Futhark ᚬ was probably named after the Æsir. The name in this sense survives only in the Icelandic rune poem as Óss, referring to Odin in particular, identified with Jupiter: