Martha Graham (May 11, 1894 – April 1, 1991) was an American modern dancer and choreographer whose influence on dance has been compared with the influence Picasso had on modern visual arts,[1][2] Stravinsky had on music, or Frank Lloyd Wright had on architecture.[3]

She danced and choreographed for over seventy years. Graham was the first dancer ever to perform at the White House, travel abroad as a cultural ambassador, and receive the highest civilian award of the USA: the Presidential Medal of Freedom. In her lifetime she received honors ranging from the Key to the City of Paris to Japan's Imperial Order of the Precious Crown. She said, "I have spent all my life with dance and being a dancer. It's permitting life to use you in a very intense way. Sometimes it is not pleasant. Sometimes it is fearful. But nevertheless it is inevitable."[citation needed]

Graham was born in Allegheny City, which today is part of Pittsburgh, Pennsylvania, in 1894. Her father George Graham was what in the Victorian era was known as an "alienist", a practitioner of an early form of psychiatry. The Grahams were strict Presbyterians. Dr. Graham was a third generation American of Irish descent and her mother Jane Beers was a tenth generation descendant of Puritan Miles Standish.

In the mid 1910s, she began her studies at the newly created Denishawn School of Dancing and Related Arts, founded by Ruth St. Denis and Ted Shawn,[4] at which she would stay till 1923.

In 1925, Graham was employed at the Eastman School of Music where Rouben Mamoulian was head of the School of Drama. Among other performances, together they produced a short two-color film called The Flute of Krishna, featuring Eastman students. Mamoulian left Eastman shortly thereafter and Graham chose to leave also, even though she was asked to stay on.

In 1926, the Martha Graham Center of Contemporary Dance was established. On April 18 of the same year,[4] at the 48th Street Theatre, Graham debuted with her first independent concert, consisting of eighteen short solos and trios that she had choreographed. She would later say of the concert "Everything I did was influenced by Denishawn."[5][6]

One of Graham's students was heiress Bethsabée de Rothschild with whom she became close friends. When Rothschild moved to Israel and established the Batsheva Dance Company in 1965, Graham became the company's first director.

In 1936, Graham made her defining work, "Chronicle", which signaled the beginning of a new era in modern dance.[citation needed] The dance brought serious issues to the stage for the general public in a dramatic manner. Influenced by the Wall Street Crash, the Great Depression and the Spanish Civil War, it focused on depression and isolation, reflected in the dark nature of both the set and costumes.

In 1938 Erick Hawkins was the first man to dance with her company. The following year, he officially joined her troupe, dancing male lead in a number of Graham's works. They were married in 1948. He left her troupe in 1951 and they divorced in 1954.

Her largest-scale work, the evening-length Clytemnestra, was created in 1958, with a score by Egyptian-born composer Halim El-Dabh. She also collaborated with composers including Aaron Copland on Appalachian Spring, Louis Horst, Samuel Barber, William Schuman, Carlos Surinach, Norman Dello Joio, and Gian Carlo Menotti.[7] Graham's mother died in Santa Barbara in 1958. Her oldest friend and musical collaborator Louis Horst died in 1964. She said of Horst "His sympathy and understanding, but primarily his faith, gave me a landscape to move in. Without it, I should certainly have been lost."

There were a few notable exceptions to her dances being taped. For example, she worked on a limited basis with still photographers Imogen Cunningham in the 1930s, and Barbara Morgan in the 1940s. Graham considered Philippe Halsman's photographs of "Dark Meadows" the most complete photographic record of any of her dances. Halsman also photographed in the 1940s: "Letter to the World", "Cave of the Heart", "Night Journey" and "Every Soul is a Circus". In later years her thinking on the matter evolved and others convinced her to let them recreate some of what was lost. 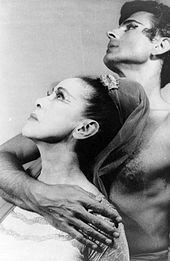 Graham started her career at an age that was considered late for a dancer. She was still dancing by the late 1960s and her works from this era included roles for herself which were more acted than danced and relied on the movement of the company dancing around her. In her biography Martha Agnes de Mille cites Graham's last performance as the evening of May 25, 1968, in a 'Time of Snow'. But in A Dancer's Life biographer Russell Freedman lists the year of Graham's final performance as 1969. In her 1991 autobiography Blood Memory Graham herself lists her final performance as her 1970 appearance in "Cortege of Eagles" when she was 76 years old.

In the years that followed her departure from the stage Graham sank into a deep depression fueled by views from the wings of young dancers performing many of the dances she had choreographed for herself and her former husband. Graham's health declined precipitously as she abused alcohol to numb her pain. In Blood Memory she wrote:

It wasn't until years after I had relinquished a ballet that I could bear to watch someone else dance it. I believe in never looking back, never indulging in nostalgia, or reminiscing. Yet how can you avoid it when you look on stage and see a dancer made up to look as you did thirty years ago, dancing a ballet you created with someone you were then deeply in love with, your husband? I think that is a circle of hell Dante omitted.

[When I stopped dancing] I had lost my will to live. I stayed home alone, ate very little, and drank too much and brooded. My face was ruined, and people say I looked odd, which I agreed with. Finally my system just gave in. I was in the hospital for a long time, much of it in a coma.[Full citation needed]

After a failed suicide attempt she got hospitalised. Graham not only survived her hospital stay but she rallied. In 1972 she quit drinking, returned to her studio, reorganized her company and went on to choreograph ten new ballets and many revivals. Her last completed ballet was 1990's Maple Leaf Rag.

Graham choreographed until her death in New York City from pneumonia in 1991, aged 96.[8] She was cremated, and her ashes were spread over the Sangre de Cristo Mountains in northern New Mexico.

Graham has been sometimes termed the "Picasso of Dance," in that her importance and influence to modern dance can be considered equivalent to what Pablo Picasso was to modern visual arts.[1][2] Her impact has been also compared with the influence Stravinsky had on music, or Frank Lloyd Wright had on architecture.[3]

To celebrate her 117th birthday on May 11, 2011, Google celebrated by turning their logo for one day into a logo dedicating the life and legacy of Graham.[9]

The Martha Graham Dance Company is the oldest dance company in America,[10] and continues to perform, including at the Saratoga Performing Arts Center in June 2008, a program consisting of: Ruth St. Denis' The Incense; Graham's reconstruction of Ted Shawn's Serenata Morisca; Graham's Lamentation; Yuriko's reconstruction of Graham's Panorama, performed by dancers from Skidmore College; excerpts from Yuriko's and Graham's reconstruction of the latter's Chronicle from the Julien Bryan film; Graham's Errand into the Maze and Maple Leaf Rag.[citation needed] The company also performed in 2007 at the Museum of Contemporary Art, Chicago, with a program consisting of: Appalachian Spring, Embattled Garden, Errand into the Maze, and American Original.[11][12]

According to Agnes de Mille:

The greatest thing she ever said to me was in 1943 after the opening of Oklahoma!, when I suddenly had unexpected, flamboyant success for a work I thought was only fairly good, after years of neglect for work I thought was fine. I was bewildered and worried that my entire scale of values was untrustworthy. I talked to Martha. I remember the conversation well. It was in a Schrafft's restaurant over a soda. I confessed that I had a burning desire to be excellent, but no faith that I could be. Martha said to me, very quietly: "There is a vitality, a life force, an energy, a quickening that is translated through you into action, and because there is only one of you in all of time, this expression is unique. And if you block it, it will never exist through any other medium and it will be lost. The world will not have it. It is not your business to determine how good it is nor how valuable nor how it compares with other expressions. It is your business to keep it yours clearly and directly, to keep the channel open. You do not even have to believe in yourself or your work. You have to keep yourself open and aware to the urges that motivate you. Keep the channel open. ... No artist is pleased. [There is] no satisfaction whatever at any time. There is only a queer divine dissatisfaction, a blessed unrest that keeps us marching and makes us more alive than the others."[13]

Graham was awarded the Presidential Medal of Freedom in 1976 by President Gerald Ford (the First Lady Betty Ford had danced with Graham in her youth). Ford declared her "a national treasure".[citation needed]

Graham was inducted into the National Museum of Dance C.V. Whitney Hall of Fame in 1987.[citation needed]