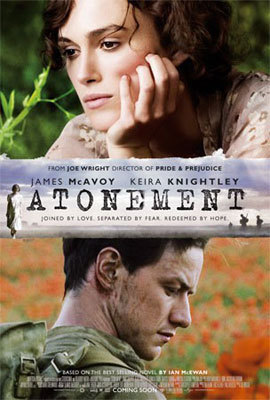 "Atonement" is a 2007 film adaptation of 's critically acclaimed novel of the same name, directed by , and based on a screenplay by . It was produced by and filmed throughout the summer of 2006 in England and France, starring and . Distributed worldwide by , with minor releases through other divisions, it was released in the United Kingdom and Ireland on , and in North America on .

"Atonement" opened the , making Wright, at the age of 35, the youngest director ever to open the event. The film also opened the 2007 .

The film won an Oscar for the Best Original Score at the , and was nominated for six others, including Best Picture, Best Adapted Screenplay and Best Supporting Actress ().

The film comprises four parts, corresponding to the four parts of the novel. Some scenes are shown several times from different perspectives.

Briony Tallis () is a 13-year-old girl from an upper-class English family and the youngest of three, and an aspiring writer. Her older sister Cecilia () is educated at Cambridge University alongside Robbie Turner (), the son of their housekeeper (), whose school fees are currently paid by Cecilia's father. Though Robbie is headed for medical school soon, he is currently spending the summer gardening on the Tallis estate. It is obvious from the beginning of the film that Briony has a crush on Robbie. Their cousin, Lola Quincey (), age 15, and her younger twin brothers (Felix and Charlie von Simson) are currently visiting the family amidst their parents' divorce. Lastly, Leon (Patrick Kennedy)&mdash;Briony and Cecilia's brother&mdash;brings home a friend named Paul Marshall (), who owns a chocolate factory that is acquiring a contract to produce army rations. The Tallis family is planning for a special dinner, to which Leon happily invites Robbie (who accepts, much to Cecilia's annoyance).

Briony has just finished writing a play titled "The Trials of Arabella", which she describes as about "the complications of love". However, her cousins are being difficult with regard to staging the play, much to her frustration. Alone in her bedroom, she happens to witness a significant moment of between Robbie and her sister by the fountain, when her sister strips down to her underwear and dips into the fountain, to retrieve the lost part of a broken vase. She becomes jealous of the romantic tension between the two. Shortly later Robbie writes drafts of apology letters to Cecilia, including one very charged version. On his way to join the Tallis family celebration, he asks Briony to deliver his letter only to realize too late that it is the erotic note he had not intended Cecilia to read. Briony secretly reads the letter and becomes even more jealous of the relationship developing between her sister and Robbie. When Cecilia reads the letter she is not offended and is somewhat elated, though she is angry and embarrassed that Briony has opened it.

That evening Briony encounters Cecilia and Robbie again; this time they are secluded in the library, where they have for the first time. However, the jealous Briony witnesses the two in the throes of lovemaking and this infuriates her. At dinner (where Robbie and Cecilia secretly hands under the table) the jealous Briony is verbally aggressive towards Robbie but is cut off short when her mother () tells Briony to fetch the twins. Briony finds a note on their bed saying that they are running away back home and immediately the family members split up to search for the twins on the very large estate. As Briony goes off alone into the darkness to find them, she stumbles upon a man in a dinner suit Lola. Though Lola&mdash;apparently traumatised&mdash;claims not to know who her attacker was (since he covered her eyes) Briony witnesses the event. Back at the estate the police have been contacted. Briony insists that she "knows who did it"; that is, who raped Lola. She tells everyone that it was Robbie. Everyone now believes the attacker to be Robbie, while Cecilia strongly refuses to believe he is guilty. Robbie later returns from the search, with the twins safely in tow, and is arrested and sent to prison.

The story then moves ahead four years, to the opening phases of the Second World War. Robbie, having been convicted but released from prison on condition that he enlist, as a private in the British Expeditionary Force and is hiding in a French attic with two fellow soldiers cut off from their units during the German invasion of France. Here the of the rape accusation is shown in dialogue and flashback. Before his deployment, he was reunited with Cecilia in London, where they renewed their love, and he made a promise to return to her. Like Cecilia, eighteen-year-old Briony (now played by ) has joined the nursing corps in London, and has tried unsuccessfully to reach her sister. Cecilia has refused contact, blaming Briony for Robbie's imprisonment. It turns out that Cecilia had broken off contact with all her family, since they all believe in Robbie's guilt.

With his two companions, the wounded and very ill Robbie finally arrives at the beaches of , where he is waiting to be evacuated. He is told that all the soldiers are to leave the next day and falls asleep. Shortly thereafter, at the hospital where she is a nurse, Briony experiences the horror of the evacuation. In one scene, a mortally wounded French soldier dies while she is attempting to comfort him.

After seeing a newsreel showing members of the Royal Family visiting Paul Marshall's chocolate factory, Briony attends the wedding of Marshall and her cousin Lola. At this time, Briony has flashbacks of the night Lola was raped, and she realises that it was Paul, not Robbie. On that day, Briony summons up the courage to visit Cecilia's flat and apologizes to her directly, recanting her accusation. Robbie, having been evacuated from Dunkirk, emerges from Cecilia's bedroom, awakened by the commotion of their argument, and he angrily confronts Briony. Cecilia calms him, but the couple demand that Briony immediately tell her family and the authorities the truth, so that his name can be cleared. Robbie insists that she write to him precisely what happened, and why she did it, and to give the details to a . While Cecilia and Robbie assume that a certain servant boy was the culprit, Briony reveals that she knows it was Paul Marshall, who, now having married Lola, cannot be implicated in a court of law by his wife. Briony rides the Underground away from her sister and Robbie to finally tell the truth of the affair.

The film suddenly shifts forward in time to , where an elderly Briony () being overcome with emotion and memory. She is being interviewed (by ) about her latest novel, "Atonement", and here Briony reveals that she is dying of , and that this novel is her last, but that she began it first. Briony admits that the novel is autobiographical. Briony expresses deep remorse and says that this novel, to which she gave an ending different from the reality, had been her chance to give her sister and Robbie the hope and the happiness that they had deserved—and that she had stolen from them. The novel is, therefore, her atonement for the naive but destructive acts of a 13-year-old child, which she has always regretted.

The film closes with a scene of a simple, joyful moment that Cecilia and Robbie might have had, if events had played out differently. The background is taken from a postcard of an English cliff-side beach that Cecilia had once given to Robbie.

* as Cecilia Tallis, the elder of the two Tallis sisters. Originally intended to play 18-year-old Briony, Knightley was the first reported to have landed one of the starring roles in "Atonement", having previously worked with Wright on the cinema adaptation of 's "Pride & Prejudice" (2005).

The film was produced by and filmed throughout the summer of 2006 in Great Britain and France.

All the exteriors and interiors of the Tallis family home were filmed at , , , and chosen from the pages of an old copy of "Country Life" magazine. [cite news|url= http://www.iht.com/articles/2007/08/30/arts/fmreview31.php?page=1|publisher=International Herald Tribune|first=Roderick|last=Conway Morris|date=2007-08-30|title=Review: 'Atonement' and 'Se, jie' at Venice festival: Love and lust in wartime] The Victorian mansion was built in 1889 by glove manufacturer John Derby-Allcroft and is still privately owned (the original McEwan novel mentions the house as having been built in the same period). London locations included and Bethnal Green Town Hall, latter being used for a 1939 tea house scene, as well as , , which served as location for Lola's wedding. The scenes from the 1940 Balham station were filmed in the former station of Aldwych, which was closed in the 1990s. Parts of the St. Thomas's hospital ward interior and corridors were filmed at Park Place, ; the exterior of the hospital actually being .

While the third portion of "Atonement" was entirely filmed at the in , the beach and cliff scene first shown on the postcard and later seen towards the end of the film were filmed at the , more precisely at which is incidentally quite near to which Cecilia was said to have attended. The scenes of the French countryside were filmed in Coates and , ; Walpole St. Andrew and ; and in Manea and Pymore, in . The scenes shot in Redcar include the seafront as a war-torn and a scene in the local cinema on the promenade.

Another location used in the making of the film was the Lincolnshire Town of Great Grimsby. The Dunkirk street scenes used in the film was of the Grimsby Ice Factory on Grimsby docks. The interior and exterior is present in the film, trailers and the deleted scenes on the DVD.

The film has received positive reviews by the vast majority of film critics. As of , the review site "" records that 82% of 171 critics gave the film positive reviews, with a consensus that the film's "strong performances, brilliant cinematography, and lovely score make for a very successful adaptation of Ian McEwan's novel." [cite web|url=http://www.rottentomatoes.com/m/atonement/ |title=Atonement - Rotten Tomatoes |accessdate=2007-01-18 |publisher=] On the other review sites, "" records an average score of 85%, based on 36 reviews. [cite web|url=http://www.metacritic.com/film/titles/atonement |title=Atonement (2007): Reviews |accessdate=2007-12-15 |publisher=] gave it a four star review saying that the film was "one of the year's best films, a certain best picture nominee." [cite web|url=http://rogerebert.suntimes.com/apps/pbcs.dll/article?AID=/20071206/REVIEWS/712060301|title=No Atonement|first=Roger|last=Ebert|authorlink=Roger Ebert|accessdaymonth=28 December|accessyear=2007] The film was listed as number 3 on "'s" top 25 films of 2007. In the movie review television program, "", Richard Roeper gave the film "thumbs up" adding that Knightley gave: "One of her best performances". As for the film , he commented that: "Atonement has hints of greatness but it falls just short of Oscar contention."

On 16th January , the film received 14 BAFTA nominations for the including Best Film, Best British Film and Best Director.

"Atonement" was released on 4th February , and the edition was released on 11th March . The and /DVD combo editions (USA/Canada) were released on 18th March . [ [http://movies.nytimes.com/movie/445393/Atonement/dvd DVD Release on The New York Times] ] [ [http://www.dvdactive.com/news/releases/atonement4.html Universal official statement for Atonement DVD] ]