The Mayo Hotel is a historic building located in downtown Tulsa, Oklahoma at 115 West 5th Street. This Chicago School (Sullivanesque) Building was built in 1925. It was designed by architect George Winkler and financed by John D. and Cass A. Mayo.[2] The base of two-story Doric columns supports fourteen floors marked with false terracotta balconies, and a two-story crown of stone and a dentiled cornice[3] It was listed on the National Register of Historic Places in 1980. It was listed under National Register Criterion C, and its NRIS number is 80003303.

Once the tallest building in Oklahoma, the hotel originally had 600 rooms. Ceiling fans in each room and Tulsa's first running ice water made the hotel a haven from summer heat. 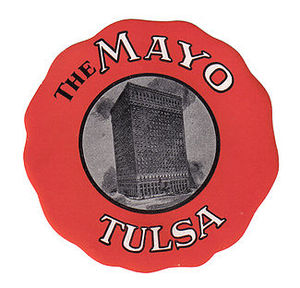 An original luggage sticker from the Mayo Hotel- ca. 1930's

It hosted many of Tulsa's most notable 20th century visitors, including President John F. Kennedy, Bob Hope, Charles Lindbergh, Babe Ruth, Charlie Chaplin and Mae West. The Mayo hotel also served as residence to notable oilmen of the era, including J. Paul Getty.[4] In William Inge's 1953 Pulitzer Prize winning play, Picnic, the Mayo Hotel is the place where the lead character Hal intends to find work as a bellhop.[5]

A failed renovation attempt in the early 1980s left the building unoccupied and missing many of its original fixtures and interior ornamentation. Abandoned for 20 years, the Mayo seemed destined for the wrecking ball until June 2001, when the Snyder family purchased it for $250,000 and began renovation efforts. Initial efforts focused on restoring the lower floors, which became a popular venue for galas, proms, receptions and meetings. An $11.2 million project to convert seven upper floors into 70 loft apartments began in 2008.[citation needed] $4.9 million in public funds were allocated to the project from the Tulsa County development package known as "Vision 2025"[6] approved by voters in 2003. The hotel owners provided an additional $6.3 million.[citation needed] The total cost of the building renovation has been reported to be $40 million.[2][6] 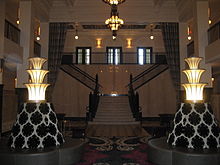 As part of this renovation project, the Mayo also became the first Oklahoma building to complete environmental remediation under a new brownfields program sponsored by the Oklahoma Corporation Commission.[7]

Apartment tenants began moving into the restored building in late August 2009,[8] and the hotel reopened for business in September,[9] with a formal grand reopening in December.[10] The Mayo Hotel privately opened early for their first guest, Britney Spears who booked 80 rooms for her tour stop in Tulsa on September 15th, 2009. Since then, the hotel has hosted numerous guests such as One Republic, Lady Gaga, Bob Seger, Josh Groban, and many more.