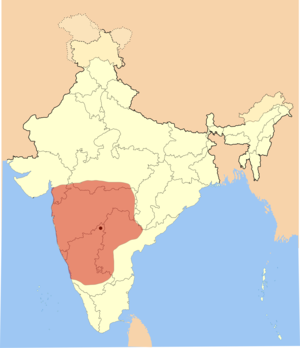 leader1 = Tailapa II
leader2 = Somesvara IV
year_leader1 = 957 – 997
year_leader2 = 1184 – 1189
title_leader = King
footnotes = The Western Chalukya Empire (:ಪಶ್ಚಿಮ ಚಾಲುಕ್ಯ ಸಾಮ್ರಾಜ್ಯ) ruled most of the western Deccan, , between the 10th and 12th centuries. This dynasty is sometimes called the "Kalyani Chalukya" after its regal capital at Kalyani, today's in and alternatively the "Later Chalukya" from its theoretical relationship to the sixth century of . The dynasty is called Western Chalukyas to differentiate from the contemporaneous of , a separate dynasty. Prior to the rise of these Chalukyas, the empire of controlled most of deccan and central India for over two centuries. In 973, seeing confusion in the Rashtrakuta empire after a successful invasion of their capital by the of , a feudatory of the Rashtrakuta ruling from Bijapur region defeated his overlords and made Manyakheta his capital. The dynasty quickly rose to power and grew into an empire under who moved the capital to Kalyani.

The Western Chalukyas developed an architectural style known today as a transitional style, an architectural link between the style of the early Chalukya dynasty and that of the later Hoysala empire. Most of its monuments are in the districts bordering the Tungabhadra River in central Karnataka. Well known examples are the at , the Mallikarjuna Temple at Kuruvatii, the Kallesvara Temple at Bagali and the Mahadeva Temple at Itagi. This was an important period in the development of fine arts in Southern India, especially in literature as the Western Chalukya kings encouraged writers in the native language of , and .

Knowledge of the Western Chalukyas history has come through examination of the numerous excavated Kannada language inscriptions left by the kings and from the study of important contemporary literary documents in such as "Gada Yuddha" (982) in Kannada by and "Vikramankadeva Charitam" (1120) in Sanskrit by .

Inscriptional evidence suggests a possible rebellion by a local Chalukya King, Chattigadeva of -12000 province (967), in alliance with local Kadamba chieftains. This rebellion however was unfruitful but paved the way for his successor Tailapa II.

The intense competition between the kingdoms of the western deccan and those of the Tamil kingdoms came to the fore in the eleventh century over the acutely contested fertile river valleys in the region of the Krishna and called (coastal ). The Western Chalukyas and the fought many bitter wars over control of this strategic resource. The imperial Cholas gained power during the time of the famous king and the crown prince .

The fifty year reign of Vikramaditya VI, the most successful of the later Chalukya rulers, was an important period in Karnataka's history and is referred to by historians as the "Chalukya Vikrama era".

The continual warring with the Cholas exhausted both empires, giving their subordinates the opportunity to rebel.

The Kalachuris were originally immigrants into the southern deccan from central India and called themselves "Kalanjarapuravaradhisavaras".

The overall effort by Somesvara IV to rebuild the Chalukya empire failed and the dynasty was ended by the Seuna rulers who drove Somesvara IV into exile in 1189. After the fall of the Chalukyas, the Seunas and Hoysalas continued warring over the Krishna River region in 1191, each inflicting a defeat on the other at various points in time.

The Western Chalukya kingship was hereditary, passing to the king's brother if the king did not have a male heir. The administration was highly decentralised and feudatory clans such as the , the Hoysalas, the Kakatiya, the Seuna, the southern Kalachuri and others were allowed to rule their autonomous provinces, paying an annual tribute to the Chalukya emperor.

The kingdom was divided into provinces such as "Banavasi-12000", "Nolambavadi-32000", "Gangavadi-96000", each name including the number of villages under its jurisdiction. The large provinces were divided into smaller provinces containing a lesser number of villages, as in "Belavola-300". The big provinces were called "Mandala" and under them were "Nadu" further divided into "Kampanas" (groups of villages) and finally a "Bada" (village). A "Mandala" was under a member of the royal family, a trusted feudatory or a senior official. himself was in charge of Tardavadi province during the rule. Chiefs of "Mandalas" were transferable based on political developments. For example, an official named Bammanayya administered Banavasi-12000 under King Somesvara III but was later transferred to Halasige-12000. Women from the royal family also administered "Nadus" and "Kampanas". Army commanders were titled "Mahamandaleshwaras" and those who headed a "Nadu" were entitled "Nadugouvnda".

Agriculture was the empire's main source of income through taxes on land and produce. The majority of the people lived in villages and worked farming the staple crops of rice, pulses, and cotton in the dry areas and sugarcane in areas having sufficient rainfall, with and being the chief cash crops. The living conditions of the labourers who farmed the land must have been bearable as there are no records of revolts by the landless against wealthy landlords. If peasants were disgruntled the common practice was to migrate in large numbers out of the jurisdiction of the ruler who was mistreating them, thereby depriving him of revenue from their labor.

Taxes were levied on mining and forest products, and additional income was raised through tolls for the use of transportation facilities. The state also collected fees from customs, professional licenses, and judicial fines.

Rich traders contributed significantly to the king's treasury through paying import and export taxes. The edicts of the Aihole "Svamis" mention trade ties with foreign kingdoms such as Chera, , Maleya (), , , Saurashtra, , Kambhoja (), Lata (), Parasa () and . Travelling both land and sea routes, these merchants traded mostly in precious stones, spices and perfumes, and other specialty items such as camphor. Business flourished in precious stones such as diamonds, , , , carbuncles and . Commonly traded spices were cardamom, saffron, and cloves, while perfumes included the by-products of sandalwood, , musk, and rose. These items were sold either in bulk or hawked on streets by local merchants in towns.

The fall of the Rashtrakuta empire to the Western Chalukyas in the tenth century, coinciding with the defeat of the by the Cholas in Gangavadi, was a setback to . The growth of in the Chalukya territory and Vaishnava Hinduism in the Hoysala region paralleled a general decreased interest in Jainism, although the succeeding kingdoms continued to be religiously tolerant.

Although the origin of the Virashaiva faith has been debated, the movement grew through its association with in the twelfth century.

The impact of these religious developments on the culture, literature, and architecture in South India was profound. Important works of metaphysics and poetry based on the teachings of these philosophers were written over the next centuries. , , and a host of Basavanna's followers, including Chenna Basava, Prabhudeva, Siddharama, and Kondaguli Kesiraja wrote hundreds of poems called in praise of .

The rise of ism was revolutionary and challenged the prevailing which retained royal support. The social role of women largely depended on their economic status and level of education in this relatively liberal period. Freedom was more available to women in the royal and affluent urban families. Records describe the participation of women in the fine arts, such as Chalukya queen Chandala Devi's and queen Sovala Devi's skill in dance and music. The compositions of thirty women poets included the work of the 12th century mystic Akka Mahadevi whose devotion to the "" movement is well known.

In a Hindu caste system that was conspicuously present, s enjoyed a privileged position as providers of knowledge and local justice. These Brahmins were normally involved in careers that revolved around religion and learning with the exception of a few who achieved success in martial affairs. They were patronised by kings, nobles and wealthy aristocrats who persuaded learned Brahmins to settle in specific towns and villages by making them grants of land and houses. The relocation of Brahmin scholars was calculated to be in the interest of the kingdom as they were viewed as persons detached from wealth and power and their knowledge was a useful tool to educate and teach ethical conduct and discipline in local communities. Brahmins were also actively involved in solving local problems by functioning as neutral arbiters ("Panchayat").

Regarding eating habits, Brahmins, Jains, Buddhists and Shaivas were strictly vegetarian while the partaking of different kinds of meat was popular among other communities. Marketplace vendors sold meat from domesticated animals such as goats, sheep, pigs and fowl as well as exotic meat including partridge, hare, wild fowl and boar.

Schools and hospitals are mentioned in records and these were built in the vicinity of temples. Marketplaces served as open air town halls where people gathered to discuss and ponder local issues. Choirs, whose main function was to sing devotional hymns, were maintained at temple expense. Young men were trained to sing in choirs in schools attached to monasteries such as Hindu "", Jain "Palli" and Buddhist "".

The Western Chalukya era was a time of substantial literary activity in Kannada and Sanskrit.

Most notable among Kannada scholars were , grammarian and Virashaiva saint Basavanna. Ranna who was patronised by king Tailapa II and Satyasraya is one among the "three gems of Kannada literature".

A unique and native form of poetic literature in Kannada called developed during this time. They were written by mystics, who expressed their devotion to God in simple poems that could appeal to the masses. Basavanna, Akka Mahadevi and Allama Prabhu are the best known among them.

In Sanskrit, a well known poem ("") in 18 cantos called "Vikramankadeva Charita" by Kashmiri poet recounts in epic style the life and achievements of his patron king Vikramaditya VI. The work narrates the episode of Vikramaditya VI's accession to the Chalukya throne after overthrowing his elder brother Somesvara II.

"Manasollasa" or "Abhilashitartha Chintamani" by king (1129) was a Sanskrit work intended for all sections of society. This is an example of an early encyclopedia in Sanskrit covering many subjects including medicine, magic, veterinary science, valuing of precious stones and pearls, fortifications, painting, music, games, amusements etc.

A Sanskrit scholar became famous in the field of legal literature for his "", in the court of Vikramaditya VI. Perhaps the most acknowledged work in that field, Mitakshara is a treatise on law (commentary on "Yajnavalkya") based on earlier writings and has found acceptance in most parts of modern India. An Colebrooke later translated into English the section on inheritance giving it currency in the British Indian court system.

The reign of Western Chalukya dynasty was an important period in the development of deccan architecture. The architecture designed during this time served as a conceptual link between the of the eighth century and the popularised in the thirteenth century.

The local language Kannada was mostly used in Western (Kalyani) Chalukya inscriptions and epigraphs. Some historians assert that ninety percent of their inscriptions are in the Kannada language while the remaining are in Sanskrit language.

In addition to inscriptions, chronicles called "Vamshavalis" were written to provide historical details of dynasties. Writings in Sanskrit included poetry, grammar, lexicon, manuals, rhetoric, commentaries on older works, prose fiction and drama. In Kannada, writings on secular subjects became popular. Some well known works are "Chandombudhi", a prosody, and "Karnataka Kadambari", a romance, both written by , a lexicon called "Rannakanda" by (993), a book on medicine called "Karnataka-Kalyanakaraka" by Jagaddala Somanatha, the earliest writing on astrology called "Jatakatilaka" by Sridharacharya (1049), a writing on erotics called "Madanakatilaka" by Chandraraja, and an encyclopedia called "Lokapakara" by Chavundaraya II (1025).