Du Yuesheng
This is a Chinese name; the family name is Du. 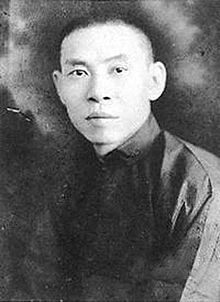 Du Yuesheng (Chinese: 杜月笙; Wade–Giles: Tu Yüeh-sheng; Cantonese Yale: Dou Yut-sang), commonly known as "Big-Eared Du", (1888 8.22－1951 8.16) was a Chinese gangster who spent much of his life in Shanghai. He was a key supporter of the Kuomintang (KMT; aka Nationalists) and Chiang Kai-shek in their battle against the Communists during the 1920s, and was a figure of some importance during the Second Sino-Japanese War. After the Chinese Civil War and the KMT's retreat to Taiwan, Du went into exile in Hong Kong and remained there until his death in 1951.

Born in Gaoqiao, a small town east of Shanghai, Du's family moved to Shanghai in 1889. By the time he was nine, Du was orphaned - his mother died in childbirth, his sister was sold into slavery, his father died, and his stepmother vanished - leaving him to return to Gaoqiao and be taken in by his grandmother. He returned to Shanghai in 1902, working at a fruit-stand in the French Concession before being fired for theft. After drifting, Du became a bodyguard for a brothel and there fell into favor with the Green Gang, the most powerful secret society in Shanghai. He joined the group at the age of 16.

Du was soon introduced by a friend to "Pockmarked" Huang Jinrong, the highest-ranking Chinese detective on the French Concession Police (FCP) and one of Shanghai's most important gangsters. Huang's wife was a notable criminal in her own right, and took a shine to the young Du herself (some say their relationship was sexual). Even though Huang was not a Green Gang member, Du became Huang's gambling and opium enforcer. A stickler for fine clothing and many women, Du Yuesheng was now cemented; he wore only Chinese silks (a superstitious streak meant he also had three small monkey heads, especially imported from Hong Kong, sewn to his clothes at the small of his back), surrounded himself with White Russian bodyguards, and frequented the city's best nightclubs and sing-song houses.

Du's prestige led him to purchase a four-storey, Western-style mansion in the French Concession and entertain dozens of concubines, four legal wives and six sons, but his meteoric rise as Shanghai's most famous mobster only came after Huang Jinrong was arrested in 1924 by the Shanghai Garrison police.[1] Huang had publicly beaten the son of Shanghai's current warlord, and his arrest required Du's diplomacy and finances to get him released. He stood down almost immediately after his release, turning his criminal empire over to Du, who became known as the "Jung-shi" (宗師) or "Boss of the Underworld." Du now controlled gambling dens, prostitution and protection rackets, as well as setting up a number of legitimate companies including Shanghai's largest shipping corporation and two banks. With the tacit support of the police and colonial government, he also now ran the French Concession's opium trade, and became heavily addicted to his own drug.

Alliance with the Kuomintang

In contrast to his views on legality, politically Du Yuesheng was a staunch Confucian conservative. He had close ties with Chiang Kai-shek, who in turn had ties to both the Green Gang and other organised secret societies from his early years in Shanghai, and forged political alliances throughout the 1920s, going so far as to offer major support in the 1927 Shanghai Purge. The resulting massacre ended the First United Front, and as a reward for Du's service Chiang appointed him as president of the national Board of Opium Suppression Bureau. The end result was that Du came to officially control the entirety of China's opium trade.

Green Gang support for the Nationalist government included funding and equipment, even going so far as to purchase a German Junkers 87 emblazoned with the Board of Opium Suppression Bureau logo. In return, Du was given leeway to run labor unions and keep business flowing freely. In 1936, Du had the financial and political clout to open his own temple - one dedicated to his ancestors and family-members - and have a three day long party held in honor of its grand opening. It was one of Shanghai's most impressive celebrations, with hundreds of celebrities and government figures attending. Within months of its opening, however, the temple's private wings had been turned over to the manufacture of heroin, making it Shanghai's largest drug factory.

When the Second Sino-Japanese War broke out in 1937, Du offered to fight the Japanese by scuttling his fleet of ships at the mouth of Yangtze but eventually fled for the safety of Hong Kong and then on to Chungking. Green Gang operatives cooperating with Major-General Dai Li, Chiang's Intelligence Chief, continued to smuggle weapons and goods to the Kuomintang (KMT) throughout the war, and Du himself was a board member of the Chinese Red Cross. Following Japan's surrender in 1945, Du returned to Shanghai expecting a warm welcome but was shocked when not received as a returning hero. Many Shanghai residents felt that Du had abandoned the city, leaving its civilians to suffer under the atrocities of Japanese occupation.

The Chiang and Du relationship was further soured after World War II, when corruption and crime committed by top-ranking politicians and gangsters caused great problems within the KMT. Chiang Kai-shek's son, Chiang Ching-kuo, launched an anti-corruption campaign in Shanghai in the late 1940s, with Du's relatives among the first to be jailed. Although Du successfully managed their release by threatening to expose Chiang's own relatives' embezzlement, the jailing of Du's sons effectively ended Chiang and Du's honeymoon.

During the Nationalist flight to Taiwan in 1949, Du instead escaped to Hong Kong. Tales vary as to his finances and power during this period, with some arguing he lived in practical squalor, and others saying he had built up a sizable nest-egg. Slowly going blind, and perhaps going senile, Du decided it was safe to return to China in 1951. But he died of illness in Hong Kong, apparently brought about due to his addiction to opium, while planning to return to the mainland. He is buried in Taiwan, in the Taipei suburb of Xizhi.

For many years, Du Yuesheng and his exploits were officially banned in Communist China on the grounds that they encourage criminality. Chinese language biographies have been banned and writers and sellers of such books arrested. Recently, critical study of Du has become more open although the official ban has never been entirely lifted.