Vermilion
This article is about the color. For other uses, see Vermilion (disambiguation).

Vermilion is an opaque orangish red pigment, similar to scarlet. As a naturally occurring mineral pigment, it is known as cinnabar, and was in use around the world before the Common Era began.[1] Most naturally produced vermilion comes from cinnabar mined in China, and vermilion is nowadays commonly called 'China red'.[2] The name 'vermilion' is derived from the French vermeil (indicating any red dye), from Latin vermiculum, the ancient insect dye from Kermes vermilio.[3] Words for red hues in Portuguese (vermelho) and Catalan (vermell) arose similarly. 'Cinnabar' and 'vermilion' were used interchangeably to describe either the natural or manufactured pigment until the 17th century when vermilion became the more common name. By the late 18th century 'cinnabar' applied to the unground natural mineral only.

The chemical structure of the pigment is HgS mercuric sulfide; like most mercury compounds it is considered toxic. Vermilion is now produced by reacting mercury with molten sulfur. Mercuric sulfides offer a range of warm hues – from bright orange-red to a duller bluish-red. Differences in hue arise via the size of the ground particles of pigment. Larger crystals produce duller and less-orange hue. It is now theorized that coarser, duller "Chinese" forms of vermilion will prove to be more permanent than the more orange "French" variety. It is also theorized that purification of any such pigment benefits its general stability. For safety reasons the mercury in this formula has recently been replaced with cadmium, yielding a similar range of hues. 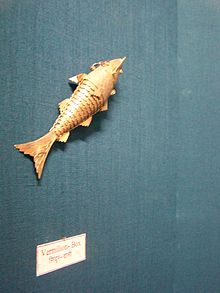 Before the invention of writing, cinnabar pigments were used by humans. This is evidenced across the Old World, east (China, India (as Sindoor)) to west (Spain). As minium it was ancient Rome's most valued pigment[citation needed]. Grateful Romans led victorious generals in procession to Capitolinus Temple, the victors' faces covered with minium, honoring the vermilion visage of Jupiter upon Capitoline Hill. Pliny the Elder records that it became so expensive that the price became fixed by decree- 70 sesterces per libum,[4]-- ten times more costly than red ochre.

From ancient times vermilion was regarded as the color of life (i.e., blood). Cinnabar provided the ubiquitous "China red", coloring Chinese life from the palatial red lacquers to the printing-pastes for personal name chops, and a unique red calligraphic ink reserved for Emperors. Chinese Taoists associated vermillion with eternity.

By the 8th century CE., the Chinese had recorded a procedure incorporating mercury and sulfur into a synthesized vermilion. By the 12th century the synthetic was introduced into Europe but in the west vermillion remained expensive- comparable to gilding in illuminated manuscript production- until the 14th century when the consistency of the synthetic set a popular standard. Cennino Cennini mentions that vermilion is

made by alchemy in a retort. I am leaving out the system for this, because it would be too tedious to set forth in my discussion all the methods and receipts. Because, if you want to take the trouble, you will find plenty of receipts for it, and especially by asking of the friars. But I advise you rather to get some of that which you find at the druggists' for your money, so as not to lose time in the many variations of procedure. And I will teach you how to buy it, and to recognize the good vermilion. Always buy vermilion unbroken, and not pounded or ground. The reason? Because it is generally adulterated, either with red lead or with pounded brick.[5]

From the 17th century is recorded a modification of Chinese manufacture known as the 'Dutch' method. Mercury and melted sulfur were mashed to make black mercury sulfide, then heated in retort, producing vapors condensing as a bright, red mercury sulfide. To remove the sulfur these crystals were treated with a strong alkali, washed and finally ground under water to yield the commercial powder form of pigment.[6]

Chinese vermillion was considered a superior hue to the European pigment. In 1835 "Chinese vermilion" was described as a cinnabar so pure that it only had to be ground into powder to become a perfect vermilion. Historically European vermilion included adulterants including brick, orpiment, iron oxide, Persian red, iodine scarlet-- and minium (red lead), an inexpensive & bright but fugitive (cf Pigment#impermanence) lead-oxide pigment.[4]

In the demanding watercolor applications the hue of natural pigment vermilion is today supplied by a versatile, stable pigment which replaces the mercury of vermillion with cadmium: this contemporary pigment is known as cadmium red. The cadmium pigments offer the same range of warm hues. With addition of selenium or zinc, hues range from lemon-yellow to the dull, deep red known as "cadmium purple". Natural pigment vermillion remains standard in oil vehicles.