Sri Nisargadatta Maharaj (April 17, 1897 – September 8, 1981), born Maruti Shivrampant Kambli, was an Indian spiritual teacher and philosopher of Advaita (Nondualism), and a Guru, belonging to the Inchgiri branch of the Navnath Sampradaya.

One of the 20th century's exponents of the school of Advaita Vedanta philosophy (nondualism), Sri Nisargadatta, with his direct and minimalistic explanation of non-dualism, is considered the most famous teacher of Advaita since Ramana Maharshi.[1]

In 1973, the publication of his most famous and widely translated book, I Am That, an English translation of his talks in Marathi by Maurice Frydman, brought him worldwide recognition and followers.[2]

Sri Nisargadatta was born on April 17, 1897, at break of dawn, the full moon in the month of Chaitra, to a devout Hindu couple Shivrampant Kambli and Parvatibai, in Bombay.[3] The day was also the birthday of Lord Hanuman, hence the boy was named 'Maruti', after Lord Hanuman himself.[4][5] Maruti Shivrampant Kambli was brought up in Kandalgaon, a small village in the Ratnagiri district of Maharashtra, where he grew up amidst his family of six siblings, two brothers and four sisters, and deeply religious parents.[6] His father, Shivrampant, worked as a domestic servant in Mumbai and later became a petty farmer in Kandalgaon.

In 1915, after his father died, he moved to Bombay to support his family back home, following his elder brother. Initially he worked as a junior clerk at an office but quickly he opened a small goods store, mainly selling bidis – leaf-rolled cigarettes, and soon owned a string of eight retail shops.[7]

In 1924 he married Sumatibai and they had three daughters and a son.

In 1933, he was introduced to his guru, Sri Siddharameshwar Maharaj, the head of the Inchegiri branch of the Navnath Sampradaya, by his friend Yashwantrao Baagkar. His guru told him, "You are not what you take yourself to be...".[8] He then gave Nisargadatta simple instructions which he followed verbatim, as he himself recounted later:

"My Guru ordered me to attend to the sense 'I am' and to give attention to nothing else. I just obeyed. I did not follow any particular course of breathing, or meditation, or study of scriptures. Whatever happened, I would turn away my attention from it and remain with the sense 'I am'. It may look too simple, even crude. My only reason for doing it was that my Guru told me so. Yet it worked!" [9]

Following his guru's instructions to concentrate on the feeling "I Am", he utilized all his spare time looking at himself in silence, and remained in that state for the coming years, practising meditation and singing devotional bhajans.[10]

After an association that lasted hardly two and a half years, Sri Siddharameshwar Maharaj died on November 9, 1936,[11] though by that time he had done his task. Maruti had reached self-awareness. Soon he adopted a new name, "Nisargadatta" meaning "naturally given" ("nis-arga" literally means "without parts," suggesting establishment in the unfragmented, seamless, solid Awareness).[12] He was also appointed as the spiritual head of the Inchegeri branch of Navnath Sampradaya, the 'Nine Masters’ tradition, a place he retained through his life.[13]

In 1937, he left Mumbai and travelled across India.[12] Through realising the shortcomings of a totally unworldly life and the greater spiritual fruitfulness of dispassionate action, he eventually returned to his family in Mumbai in 1938.[14] It was there that he spent the rest of his life.

Between 1942-1948 he suffered two personal losses, first the death of his wife, Sumatibai, followed by the death of his daughter. He started taking disciples in 1951, only after a personal revelation from his guru, Sri Siddharameshwar Maharaj.[12]

After he retired from his shop in 1966, Sri Nisargadatta Maharaj continued to receive and teach visitors in his home, giving discourses twice a day, until his death on September 8, 1981 at the age of 84, of throat cancer.[15]

According to Sri Nisargadatta the purpose of spirituality is to know who you are, a viewpoint he expounded in the talks he gave at his humble flat in Khetwadi, Mumbai, where a mezzanine room was created for him to receive disciples and visitors. This room was also used for daily chantings, bhajans (devotional songs), meditation sessions, and discourses.[16]

He talked about the 'direct way' of knowing the Final Reality, in which one becomes aware of one's original nature through mental discrimination, a method which is common to the teachers of the Navnath Sampradaya.[17] This mental discrimination or the Bird's way ('Vihangam Marg') was also presented by Nisargadatta's co-disciple, Sri Ranjit Maharaj; wherein Self-Knowledge is gained just as a bird flying in the sky goes easily from branch to branch, instead of slowly crawling its way up the tree like an ant, as in the 'Pipilika Marg'. Here the disciple reaches straight to truth, without wasting time in long drawn out practices that would take him to the 'fruit' no doubt, only slowly. He proposed to use one's mental faculty to break from the unreal to the real, and the mind's false identification with the ego, simply by listening to and constantly thinking over what the master has said, and knowing that "You are already That".[18]

The common teaching style of teaching of the Inchgiri Sampradaya masters (beginning with Shri Bhauseheb Maharaj) to Indian devotees was for the Master to select a passage from a traditional text on Advaita Vedanta, most commonly Dasbodh of Saint Shri Samarth Ramdas (as well as the "Yoga Vasishtha", "Saachara" of Shri Shankaracharya, and the "Ecknati Bhagwat" of Saint Ecknath), and to expound upon the meaning and import of that selected passage. Nisargadatta Maharaj and Ranjit Maharaj both deviated from this formal format by giving informal discourses for the benefit of western devotees who did not have access to Dasbodh or the other texts, and who were not familiar with Indian traditions and customs.[19]

Many of Nisargadatta Maharaj's talks were recorded, and these recordings form the basis of I Am That and all of his other books. His words are free from cultural and religious trappings, and the knowledge he expounds is stripped bare of all that is unnecessary.

Summed up in the words of Advaita scholar and a disciple, Dr. Robert Powell, "Like the Zen masters of old, Nisargadatta's style is abrupt, provocative, and immensely profound -- cutting to the core and wasting little effort on inessentials. His terse but potent sayings are known for their ability to trigger shifts in consciousness, just by hearing, or even reading them." 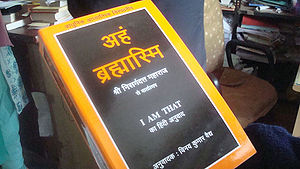 A copy of Nisargadatta's "I Am That" in Hindi.

Sri Nisargadatta's teachings are grounded in the Advaita Vedanta interpretation of the Advaita idea Tat Tvam Asi, literally "That Thou Art", (Tat = "Divinity", Tvam = "You", Asi = "are") meaning You are (actually) Divinity (who thinks otherwise). He also had a strong devotional zeal towards his own guru,[12] and suggested the path of devotion, Bhakti yoga, to some of his visitors, as he believed the path of knowledge, Jnana yoga was not for everyone.[20]

According to Sri Nisargadatta, our true nature is perpetually free peaceful awareness, in Hinduism referred to as Brahman. Awareness is the source of, but different from, the personal, individual consciousness, which is related to the body. The mind and memory are responsible for association with a particular body; awareness exists prior to both mind and memory. It is only the idea that we are the body that keeps us from living what he calls our "original essence", the True Self, in Hinduism referred to as Atman.

He describes this essence as pure, free, and unaffected by anything that occurs. He likens it to a silent witness that watches through the body's senses, yet is not moved, either to happiness or sadness, based on what it sees.

For Nisargadatta, the Self is not one super-entity which knows independently, regardless of things; there is no such super-entity, no Creator with infinite intellect. God does not exist independently from creation. What does exist is the "total acting" (or functioning) of the Ultimate or Absolute Reality along the infinite varying forms in manifestation. This Absolute Reality is identical to the Self.

Nisargadatta's teachings also focus on our notion of causality as being misinterpreted. He understood that the interconnectedness of varying forces in the universe is so vast and innumerable that the notion of causality, as presently understood, is wasted. The endless factors required for anything to happen means that, at most, one can say everything creates everything; even the choices we make are predetermined by our genetic code, upbringing, mental strivings and limitations, our ethical and philosophical ideals, etc., all of which are uniquely combined to each person and recontextualized accordingly.

This leads to the radical notion that there is no such thing as a "doer". According to him and other teachers of Vedanta, since our true nature or identity is not the mind, is not the body, but the witness of the mind and body, we, as pure awareness, do nothing. The mind and body act of their own accord, and we are the witness of them, though the mind often believes it is the doer. This false idea (that the mind is the self and responsible for actions) is what keeps us from recognizing our Self. Nisargadatta cautions:

'"The life force [prana] and the mind are operating [of their own accord], but the mind will tempt you to believe that it is "you". Therefore understand always that you are the timeless spaceless witness. And even if the mind tells you that you are the one who is acting, don't believe the mind. [...] The apparatus [mind, body] which is functioning has come upon your original essence, but you are not that apparatus." - The Ultimate Medicine, (pp.54 - 70)