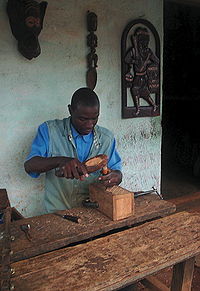 A Cameroonian artisan at work

An artisan (from Italian: artigiano) is a skilled manual worker who makes items that may be functional or strictly decorative, including furniture, clothing, jewellery, household items, and tools. As an adjective (spelled "artisanal"), it has been used as a marketing buzz word to describe or imply an association with the crafting of hand made food products, such as bread, tofu, beverages and cheese.

Artisans were the dominant producers of consumer products prior to the Industrial Revolution. According to classical economics theory, the division of labour occurs with internal market development (Adam Smith). However, according to economist John Hicks, merchants and artisans originated as servants to the rulers, which occurred much earlier.

During the Middle Ages, the term "artisan" was applied to those who made things or provided services. It did not apply to unskilled labourers. Artisans were divided into two distinct groups: those who operated their own business, and those who did not. Those who owned their businesses were called masters, while the latter were the journeymen and apprentices. One misunderstanding many people have about this social group is that they picture them as "workers" in the modern sense: employed by someone. The most influential group among the artisans were the masters, the business owners. The owners enjoyed a higher social status in their communities.[1]