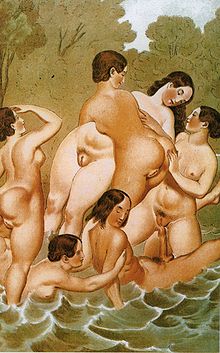 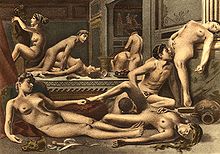 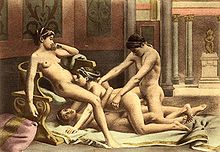 Group sex is sexual behavior involving more than two participants. Group sex can occur amongst people of all sexual orientations and genders. While this article discusses group sex among humans, the behavior also occurs in other animal species such as bighorn sheep and bonobos.

Group sex may take place in public (for instance, at outdoor events or nightclubs); at massage parlors, brothels or soaplands; at sex parties or, in some jurisdictions, at purpose-built locations such as sex clubs or gay bathhouses. In places where non-monogamous sex is taboo or illegal, group sex takes place in private or clandestine locations, including homes, hotel rooms, or private clubs.

In principle, any sexual behaviour performed by more than two people can be referred to as group sex, but various terms are used to describe particular acts or combinations of people:

Double penetration
When a person is entered or penetrated in the vagina and/or anus by two people at the same time. This usually is when one enters the anus while another enters the vagina, although it does also refer to two simultaneous penetrations in the same orifice.
Spintrian
Term used by Suetonius to describe sexual group practices indulged in by the emperor Tiberius on Capri[2]
Monogamous Group Sex or Same Room Sex
Couples engaging in sexual activity in the same room but in separate pairs, without any swapping of partners or other major sexual activity between couples.

Fantasies of group sex are extremely common among both men and women. In major studies, between 54%-88% of people fantasize about watching others have sex, 40%-42% fantasize about being watched by others, and between 39%-72% fantasize about bondage.[3] Many forms of sexual behavior were reported by Kinsey's subjects, but the official Kinsey Reports web site does not mention threesomes or group sex in the summary of Kinsey's findings.

As with all sexual activity, the relative risks of group sex depend on the specific activities engaged in, although having a large number of sexual partners increases one's risk of exposure to sexually transmitted infections (STIs).

From the mid-1980s there was lobbying against gay bathhouses blaming them for the spread of STIs, in particular HIV, and this forced their closure in some jurisdictions, particularly in the United States.[4][5] Sociologist Stephen O. Murray, writes that, "there was never any evidence presented that going to bathhouses was a risk-factor for contracting AIDS."[6] In other countries, fears about the spread of STIs have prompted the closing of bathhouses—with their private rooms—in favour of sex clubs, in which all sexual activity takes place in the open, and can be observed by monitors whose job it is to enforce safer sex practices.[7]

Proponents point out that venues where group sex takes place often provide condoms, dental dams, latex gloves, lubricants and other items for safer sex. Bathhouses in particular are a major source of safer sex information—they provide pamphlets and post safer sex posters prominently (often on the walls of each room as well as in the common areas), provide free condoms and lubricants, and often require patrons to affirm that they will only have safer sex on the premises.[8][9][10][11]