Classless Inter-Domain Routing (CIDR) is a method for allocating IP addresses and routing Internet Protocol packets. The Internet Engineering Task Force introduced CIDR in 1993 to replace the previous addressing architecture of classful network design in the Internet. Their goal was to slow the growth of routing tables on routers across the Internet, and to help slow the rapid exhaustion of IPv4 addresses.[1][2]

IP addresses are described as consisting of two groups of bits in the address: the most significant part is the network address which identifies a whole network or subnet and the least significant portion is the host identifier, which specifies a particular interface of a host on that network. This division is used as the basis of traffic routing between IP networks and for address allocation policies. Classful network design for IPv4 sized the network address as one or more 8-bit groups, resulting in the blocks of Class A, B, or C addresses. Classless Inter-Domain Routing allocates address space to Internet service providers and end users on any address bit boundary, instead of on 8-bit segments. In IPv6, however, the interface identifier has a fixed size of 64 bits by convention, and smaller subnets are never allocated to end users.

CIDR notation is a syntax of specifying IP addresses and their associated routing prefix. It appends to the address a slash character and the decimal number of leading bits of the routing prefix, e.g., 192.168.0.0/16 for IPv4, and 2001:db8::/32 for IPv6.

During the first decade of the modern Internet after the invention of the Domain Name System (DNS) it became apparent that the devised system based on the classful network scheme of allocating the IP address space and the routing of IP packets was not scalable.[3]

To alleviate the shortcomings, the Internet Engineering Task Force published in 1993 a new set of standards, RFC 1518 and RFC 1519, to define a new concept of allocation of IP address blocks and new methods of routing IPv4 packets. A new version of the specification was published as RFC 4632 in 2006.[4]

An IP address is interpreted as composed of two parts: a network-identifying prefix followed by a host identifier within that network. In the previous classful network architecture of Internet Protocol Version 4, IP address allocations were based on the bit boundaries of the four octets of an IP address. An address was considered to be the combination of an 8, 16, or 24-bit network prefix along with a 24, 16, or 8-bit individual or node address. Thus, the smallest allocation and routing block contained only 256 addresses—too small for most enterprises, and the next larger block contained 65,536 addresses—too large to be used efficiently by even large organizations. This led to inefficiencies in address use as well as routing because the large number of allocated small (class-C) networks with individual route announcements, being geographically dispersed with little opportunity for route aggregation, created heavy demand on routing equipment.

As the experimental TCP/IP network expanded into the Internet during the 1980s, the need for more flexible addressing schemes became increasingly apparent. This led to the successive development of subnetting and CIDR. Because the old class distinctions are ignored, the new system was called classless routing. It is supported by modern routing protocols, such as RIP-2, EIGRP, IS-IS and OSPF. This led to the original system being called, by back-formation, classful routing.

CIDR encompasses several concepts. It is based on the VLSM technique with effective qualities of specifying arbitrary-length prefixes. Addresses are represented in CIDR notation, in which an address or routing prefix is written with a suffix indicating the number of bits in the address, such as 192.168.0.0/16. CIDR introduced an administrative process of allocating address blocks to organizations based on their actual and short-term projected needs. The aggregation of multiple contiguous prefixes resulted in supernets in the larger Internet, which when ever possible are advertised as aggregates, thus reducing the number of entries in the global routing table. 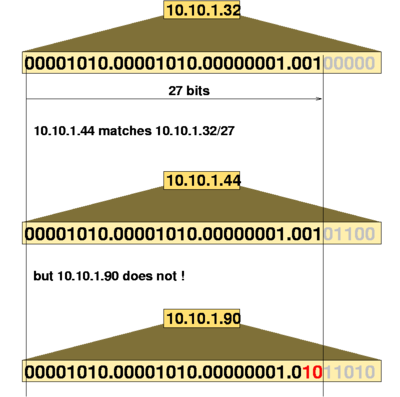 CIDR is principally a bitwise, prefix-based standard for the interpretation of IP addresses. It facilitates routing by allowing blocks of addresses to be grouped into single routing table entries. These groups, commonly called CIDR blocks, share an initial sequence of bits in the binary representation of their IP addresses. IPv4 CIDR blocks are identified using a syntax similar to that of IPv4 addresses: a four-part dotted-decimal address, followed by a slash, then a number from 0 to 32: A.B.C.D/N. The dotted decimal portion is interpreted, like an IPv4 address, as a 32-bit binary number that has been broken into four octets. The number following the slash is the prefix length, the number of shared initial bits, counting from the most-significant bit of the address. When emphasizing only the size of a network, the address portion of the notation is usually omitted. Thus, a /20 is a CIDR block with an unspecified 20-bit prefix.

CIDR is also used for IPv6 addresses and the syntax semantic is identical. A prefix length can range from 0 to 128, due to the larger number of bits in the address, however, by convention a subnet on broadcast MAC layer networks always has 64-bit host identifiers. Larger prefixes are rarely used even on point-to-point links.

The Internet Assigned Numbers Authority (IANA) issues to regional Internet registries (RIRs) large, short-prefix CIDR blocks. For example, 62.0.0.0/8, with over sixteen million addresses, is administered by RIPE NCC, the European RIR. The RIRs, each responsible for a single, large, geographic area, such as Europe or North America, then subdivide these blocks into smaller blocks and issue them to local Internet registries. This subdividing process can be repeated several times at different levels of delegation. End user networks receive subnets sized according to the size of their network and projected short term need. Networks served by a single ISP are encouraged by IETF recommendations to obtain IP address space directly from their ISP. Networks served by multiple ISPs, on the other hand, may obtain provider-independent address space directly from the appropriate RIR. CIDR provides the possibility of fine-grained routing prefix aggregation, also known as supernetting or route summarization. For example, sixteen contiguous /24 networks can be aggregated and advertised to a larger network as a single /20 route, if the first 20 bits of their network addresses match. Two aligned contiguous /20s may then be aggregated to a /19, and so forth. This allows a significant reduction in the number of routes that have to be advertised.

(*) For routed subnets bigger than /31 or /32, two reserved addresses need to be subtracted from the number of available host addresses: the largest address, which is used as the broadcast address, and the smallest address, which is used to identify the network itself. [6][7] It is also common for the IP gateway for that subnet to use an address, meaning that three addresses would have to be subtracted from the number of hosts that can be used on the subnet.