Brucellosis, also called Bang's disease, Crimean fever, Gibraltar fever, Malta fever, Maltese fever, Mediterranean fever, rock fever, or undulant fever,[1][2] is a highly contagious zoonosis caused by ingestion of unsterilized milk or meat from infected animals or close contact with their secretions. Transmission from human to human, through sexual contact or from mother to child, is rare but possible.[3] Brucella spp. are small, Gram-negative, non-motile, non-spore-forming, rod shaped (coccobacilli) bacteria. They function as facultative intracellular parasites causing chronic disease, which usually persists for life. Symptoms include profuse sweating and joint and muscle pain. Brucellosis has been recognized in animals including humans since the 20th century.

Under the name Malta fever, the disease now called brucellosis first came to the attention of British medical officers in the 1850s in Malta during the Crimean War. The causal relationship between organism and disease was first established in 1887 by Dr. David Bruce.[4][5]

In 1897, Danish veterinarian Bernhard Bang isolated Brucella abortus as the agent; and the additional name Bang's disease was assigned.

Maltese doctor and archaeologist Sir Themistocles Zammit earned a knighthood for identifying unpasteurized milk as the major source of the pathogen in 1905, and it has since become known as Malta Fever. In cattle, this disease is also known as contagious abortion and infectious abortion.

The popular name undulant fever originates from the characteristic undulance (or "wave-like" nature) of the fever, which rises and falls over weeks in untreated patients. In the 20th century, this name, along with brucellosis (after Brucella, named for Dr Bruce), gradually replaced the 19th century names Mediterranean fever and Malta fever.

In 1989, neurologists in Saudi Arabia discovered neurobrucellosis, a neurological involvement in brucellosis.[6][7]

The following obsolete names have previously been applied to brucellosis:

Species infecting domestic livestock are B. melitensis (goats and sheep, see Brucella melitensis), B. suis (pigs, see Swine brucellosis), B. abortus (cattle and bison), B. ovis (sheep), and B. canis (dogs). B. abortus also infects bison and elk in North America and B. suis is endemic in caribou. Brucella species have also been isolated from several marine mammal species (pinnipeds and cetaceans).

The bacterium Brucella abortus is the principal cause of brucellosis in cattle. The bacteria are shed from an infected animal at or around the time of calving or abortion. Once exposed, the likelihood of an animal becoming infected is variable, depending on age, pregnancy status, and other intrinsic factors of the animal, as well as the amount of bacteria to which the animal was exposed.[8] The most common clinical signs of cattle infected with Brucella abortus are high incidences of abortions, arthritic joints and retained after-birth. There are two main causes for spontaneous abortion in animals. The first is due to erythritol, which can promote infections in the fetus and placenta. The second is due to the lack of anti-Brucella activity in the amniotic fluid. Males can also harbor the bacteria in their reproductive tracts, namely seminal vesicles, ampullae, testicles, and epididymides.

The causative agent of brucellosis in dogs is Brucella canis. It is transmitted to other dogs through breeding and contact with aborted fetuses. Brucellosis can occur in humans that come in contact with infected aborted tissue or semen. The bacteria in dogs normally infect the genitals and lymphatic system, but can also spread to the eye, kidney, and intervertebral disc (causing discospondylitis). Symptoms of brucellosis in dogs include abortion in female dogs and scrotal inflammation and orchitis (inflammation of the testicles) in males. Fever is uncommon. Infection of the eye can cause uveitis, and infection of the intervertebral disc can cause pain or weakness. Blood testing of the dogs prior to breeding can prevent the spread of this disease. It is treated with antibiotics, as with humans, but it is difficult to cure.[9]

Brucellosis in humans is usually associated with the consumption of unpasteurized milk and soft cheeses made from the milk of infected animals, primarily goats, infected with Brucella melitensis and with occupational exposure of laboratory workers, veterinarians and slaughterhouse workers. Some vaccines used in livestock, most notably B. abortus strain 19, also cause disease in humans if accidentally injected. Brucellosis induces inconstant fevers, sweating, weakness, anaemia, headaches, depression and muscular and bodily pain.

The symptoms are like those associated with many other febrile diseases, but with emphasis on muscular pain and sweating. The duration of the disease can vary from a few weeks to many months or even years. In the first stage of the disease, septicaemia occurs and leads to the classic triad of undulant fevers, sweating (often with characteristic smell, likened to wet hay) and migratory arthralgia and myalgia. Blood tests characteristically reveal leukopenia and anemia, show some elevation of AST and ALT, and demonstrate positive Bengal Rose and Huddleston reactions. This complex is, at least in Portugal, known as the Malta fever. During episodes of Malta fever, melitococcemia (presence of brucellae in blood) can usually be demonstrated by means of blood culture in tryptose medium or Albini medium. If untreated, the disease can give origin to focalizations or become chronic. The focalizations of brucellosis occur usually in bones and joints and spondylodiscitis of lumbar spine accompanied by sacroiliitis is very characteristic of this disease. Orchitis is also frequent in men.

Diagnosis of brucellosis relies on:

Antibiotics like tetracyclines, rifampicin, and the aminoglycosides streptomycin and gentamicin are effective against Brucella bacteria. However, the use of more than one antibiotic is needed for several weeks, because the bacteria incubate within cells.

The gold standard treatment for adults is daily intramuscular injections of streptomycin 1 g for 14 days and oral doxycycline 100 mg twice daily for 45 days (concurrently). Gentamicin 5 mg/kg by intramuscular injection once daily for seven days is an acceptable substitute when streptomycin is not available or difficult to obtain.[10] Another widely used regimen is doxycycline plus rifampin twice daily for at least six weeks. This regimen has the advantage of oral administration. A triple therapy of doxycycline, with rifampin and cotrimoxazole, has been used successfully to treat neurobrucellosis.[11] Doxycycline is able to cross the blood–brain barrier, but requires the addition of two other drugs to prevent relapse. Ciprofloxacin and cotrimoxazole therapy is associated with an unacceptably high rate of relapse. In brucellic endocarditis, surgery is required for an optimal outcome. Even with optimal antibrucellic therapy, relapses still occur in 5–10 percent of patients with Malta fever.

The main way of preventing brucellosis is by using fastidious hygiene in producing raw milk products, or by pasteurizing all milk that is to be ingested by human beings, either in its unaltered form or as a derivate, such as cheese. Experiments have shown that cotrimoxazol and rifampin are both safe drugs to use in treatment of pregnant women who have brucellosis.

In 1954, B. suis became the first agent weaponized by the United States at its Pine Bluff Arsenal in Arkansas. Brucella species survive well in aerosols and resist drying. Brucella and all other remaining biological weapons in the U.S. arsenal were destroyed in 1971–72 when the U.S. offensive biological weapons (BW) program was discontinued.[12]

The United States BW program focused on three agents of the Brucella group:

Agent US was in advanced development by the end of World War II. When the U.S. Air Force (USAF) wanted a biological warfare capability, the Chemical Corps offered Agent US in the M114 bomblet, based after the 4-pound bursting bomblet developed for anthrax in World War II. Though the capability was developed, operational testing indicated that the weapon was less than desirable, and the USAF termed it an interim capability until replaced by a more effective biological weapon. The main drawbacks of the M114 with Agent US was that it was incapacitating (the USAF wanted "killer" agents), the storage stability was too low to allow for storing at forward air bases, and the logistical requirements to neutralize a target were far higher than originally anticipated, requiring unreasonable logistical air support.

Agents US and AB had a median infective dose of 500 org/person, and AM was 300 org/person. The rate-of-action was believed to be 2 weeks, with a duration of action of several months. The lethality estimate was based on epidemiological information at 1–2%. AM was always believed to be a more virulent disease, and a 3% fatality rate was expected.

Dairy herds in the USA are tested at least once a year with the Brucella Milk Ring Test (BRT).[13] Cows that are confirmed to be infected are often killed. In the United States, veterinarians are required to vaccinate all young stock, thereby further reducing the chance of zoonotic transmission. This vaccination is usually referred to as a "calfhood" vaccination. Most cattle receive a tattoo in their ear serving as proof of their vaccination status. This tattoo also includes the last digit of the year they were born.[14]

The first state–federal cooperative efforts towards eradication of brucellosis caused by Brucella abortus in the U.S. began in 1934.

Wild bison and elk in the Greater Yellowstone Area (GYA) are the last remaining reservoir of Brucella abortus in the U.S. The recent transmission of brucellosis from elk to cattle in Idaho and Wyoming illustrates how the GYA is the last remaining reservoir in the United States, adversely affecting the livestock industry. Eliminating brucellosis from this area is a challenge, as there are many viewpoints on how to manage diseased wildlife.

Canada declared their cattle herd brucellosis-free on September 19, 1985. Brucellosis ring testing of milk and cream, as well as testing of slaughter cattle, ended April 1, 1999. Monitoring continues through auction market testing, standard disease reporting mechanisms, and testing of cattle being qualified for export to countries other than the USA.[15] 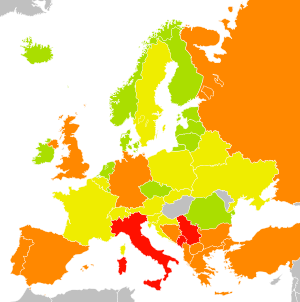 Disease incidence map of Brucella melitensis infections in animals in Europe during the first half of 2006.
never reported
not reported in this period
confirmed clinical disease
confirmed infection
no information

Until the early 20th century the disease was endemic in Malta to the point of it being referred to as "the Maltese fever". The link between the illness and unpasteurised milk was established by Temi Zammit. Today thanks to a strict regime of certification of milk animals and widespread use of pasturisation the illness has been eradicated from Malta. [16]

Ireland was declared free of brucellosis on 1 July 2009. The disease had troubled the country's farmers and veterinarians for several decades.[17][18] The Irish government submitted an application to the European Commission, which verified that Ireland had been liberated.[18] Brendan Smith, Ireland's Minister for Agriculture, Fisheries and Food, said the elimination of brucellosis was "a landmark in the history of disease eradication in Ireland".[17][18] Ireland's Department of Agriculture, Fisheries and Food intends to reduce its brucellosis eradication programme now that eradication has been confirmed.[17][18]

Australia is at present free of cattle brucelosis, although it occurred in the past. Brucellosis of sheep or goats has never been reported. Brucellosis of pigs does occur. Feral pigs are the typical source of human infections.[19]

Brucellosis in New Zealand is limited to sheep (Brucella ovis). The country is free of all other species of Brucella.[20]