The London Charterhouse is a historic complex of buildings in Smithfield, London dating back to the 14th century. It occupies land to the north of Charterhouse Square. The Charterhouse began as (and takes its name from) a Carthusian priory, founded in 1371 and dissolved in 1537. Substantial fragments remain from this monastic period, but the site was largely rebuilt after 1545 as a large courtyard house. Thus, today it "conveys a vivid impression of the type of large rambling 16th century mansion that once existed all round London" (Pevsner: The Buildings of England).[1] The Charterhouse was further altered and extended after 1611, when it became an almshouse and school, endowed by Thomas Sutton. The almshouse (a home for gentlemen pensioners) still occupies the site today under the name Sutton's Hospital in Charterhouse.

In 1348, Walter de Manny rented 13-acre (0.05 km2) of land in Spital Croft, north of Long Lane, from the Master and Brethren of St. Bartholomew's Hospital for a graveyard and plague pit for victims of the Black Death. A chapel and hermitage were constructed, renamed New Church Haw; but in 1371, this land was granted for the foundation of the London Charterhouse, a Carthusian monastery.[2]

The twenty-five monks each had their own small building and garden. Thomas More came to the monastery for spiritual recuperation. The name is derived as an Anglicisation of La Grande Chartreuse, whose order founded the monastery.[3]

The monastery was closed in 1537, in the Dissolution of the Monasteries in the English Reformation. As it resisted dissolution the monastery was treated harshly: the Prior, John Houghton was hanged, drawn and quartered at Tyburn and ten monks were taken to the nearby Newgate Prison; nine of these men starved to death and the tenth was executed three years later at Tower Hill. They constitute the group known as the Carthusian Martyrs.

For several years after the dissolution of the priory, members of the Bassano family of instrument makers were amongst the tenants of the former monks' cells, whilst Henry VIII stored hunting equipment in the church.[4] But, in 1545, the entire site was bought by Sir Edward (later Lord) North (c. 1496-1564), who transformed the complex into a luxurious mansion house. North demolished the church and built the Great Hall and adjoining Great Chamber.[1] In 1558, during North's occupancy, Queen Elizabeth I used the house during the preparations for her coronation.

Following North's death, the property was purchased by Thomas Howard, 4th Duke of Norfolk, who renamed it Howard House. In 1570, following his imprisonment in the Tower of London for scheming to marry Mary, Queen of Scots, Norfolk was placed under house arrest at the Charterhouse. He occupied his time by embellishing the house, and built a long terrace in the garden (which survives as the "Norfolk Cloister") leading to a tennis court.[1] In 1571, Norfolk's involvement in the Ridolfi plot was exposed after a ciphered letter from Mary, Queen of Scots was discovered under a doormat in the house; he was executed the following year.[5]

The property passed to Norfolk's son, Thomas Howard, 1st Earl of Suffolk. During his occupancy, James I held court there on his first entrance into London in 1603. 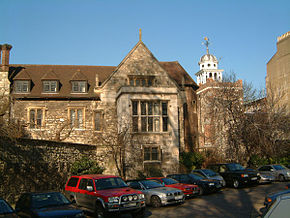 In May 1611 it came into those of Thomas Sutton (1532–1611) of Snaith, Yorkshire. He acquired a fortune by the discovery of coal on two estates which he had leased near Newcastle-on-Tyne, and afterwards, removing to London, he carried on a commercial career. In the year of his death, which took place on the 12 December 1611, he endowed a hospital on the site of the Charterhouse, calling it the hospital of King James; and in his will he bequeathed moneys to maintain a chapel, hospital (almshouse) and school. The will was hotly contested but upheld in court, and the foundation was finally constituted to afford a home for eighty male pensioners (gentlemen by descent and in poverty, soldiers that have borne arms by sea or land, merchants decayed by piracy or shipwreck, or servants in household to the King or Queens Majesty), and to educate forty boys.

Charterhouse early established a reputation for excellence in hospital care and treatment, thanks in part to Henry Levett, M.D., an Oxford graduate who joined the school as physician in 1712. Levett was widely esteemed for his medical writings, including an early tract on the treatment of smallpox. Levett was buried in Charterhouse Chapel, and his widow remarried Andrew Tooke, the master of Charterhouse.[6][7] A View of the Charter House taken from the Green, 1813

The school, Charterhouse School, developed beyond the original intentions of its founder, and now ranks among the most eminent public schools in England. In 1872 it was removed, during the headmastership (1863–1897) of the Rev. William Haig-Brown (d. 1907), to new buildings near Godalming in Surrey, which were opened on the 18 June in that year. Since then, the Fourths (students in their first year) visit the Old Charterhouse (two classes per Quarter) as part of their introduction to the school.

The buildings were damaged in the Blitz but were carefully restored during the 1950s so that some medieval and much 16th and 17th century fabric remains. Charterhouse School moved out in 1872, being replaced (till 1933) by the Merchant Taylors' School, but Charterhouse is still home to senior (male) citizens. The school buildings on the site of the former monastic cloister eventually became the home of the St Bartholomew's Hospital Medical School, and remain (though now much redeveloped) one of the sites of its successor, Barts and The London School of Medicine and Dentistry. The main part of the cloister garth continues to be a pleasant lawn in the quadrangle of the university site.

The main function of the Charterhouse today, which has an annual income in excess of £3 million, is now as a home to 40 male pensioners, known as Brothers. The best known of recent residents was Simon Raven, the novelist.

Charterhouse is a private residence, but is open for pre-booked guided tours (see website); and the chapel can be viewed as part of London Open House.

The nearest tube is Barbican but Farringdon tube and surface rail station is also close.

Charterhouse was traditionally considered an extra-parochial area and formed a civil parish from 1858 to 1915. In 1900 it was incorporated into the Metropolitan Borough of Finsbury, and since 1965 has been part of the London Borough of Islington.