Daniel Andre Sturridge (born 1 September 1989) is an English footballer who plays for Chelsea and the England national team. He is primarily a forward, but has been used on the right flank as a winger for Chelsea. This gives him the opportunity to cut inside and take shots with his favoured left foot.[4]

Sturridge was born and bred in Birmingham, where he joined Aston Villa, before joining Coventry City in 2002. He then signed for Manchester City a year later. He continued his development at City and played in two FA Youth Cup finals. He made his professional first team debut in the 2007-08 season, becoming the only player ever to score in the FA Youth Cup, FA Cup and Premier League in the same season. He left City in 2009 and signed for Chelsea, where he was unable to make the impact he made at Manchester City. He was loaned to Bolton Wanderers for the second half of the 2010–11 season. After showing an improvement at Bolton, scoring 8 goals in 12 appearances, Sturridge returned to the Chelsea squad for the 2011-12 season, being given more chances under new Chelsea manager André Villas-Boas. Sturridge scored four in four appearances and broke into the first-team as a result.

Sturridge comes from a footballing family as he is the nephew of former football strikers Simon Sturridge and Dean Sturridge.

Sturridge began his playing career in earnest at local club Aston Villa. He then moved to Coventry City in 2002, from where he joined Manchester City's Academy in 2003, aged 13.[5] A Football League committee later ordered Manchester City to pay Coventry £30,000 compensation, with further payments up to a maximum of £200,000 based upon appearances and international honours.[6] The following year, he was the leading scorer and voted player of the season (the only other person to achieve this was Argentine footballer Carlos Tévez) as City won the Nike Cup, the world's largest under-15 tournament.[7] At 16, he played for Manchester City Youth during their 2006 FA Youth Cup run. The youngest player in the side, he scored four goals en route to the final,[8] and another two in the final, though they were insufficient to prevent a 3–2 aggregate defeat to Liverpool.[9] That summer, he signed his first professional contract, which came into effect when he turned 17.[10]

From the start of the 2006–07 season, Sturridge began to train with the City first team. A hat-trick in a reserve match was rewarded by a place on the substitutes' bench for the senior side's match with Reading in February 2007.[5] He duly made his debut from the bench, replacing Georgios Samaras for the final quarter-hour.[11] He made a second substitute appearance a month later, but then suffered a hip injury which sidelined him for the remainder of 2007.[12]

He scored his first goal for City on 27 January 2008 in an FA Cup match against Sheffield United, followed three days later by his first league goal on his full debut, against Derby County.[13] However, first team opportunities were sporadic, so Sturridge continued to play for the youth team in the FA Youth Cup. City again reached the final, with Sturridge the leading scorer in the competition.[14] This time City won the final, with Sturridge scoring in the first leg.[15] In the 2007–08 season, Sturridge became the only player ever to score in the Youth FA Cup, the FA Cup and the Premier League in the same season.[16]

With Sturridge's contract at Manchester City expired, he signed for Chelsea on a four-year contract on 3 July 2009.[18] As Sturridge is under the age of 24,[19] and the two sides were unable to agree a deal, the fee for Sturridge was decided by a tribunal. The Professional Football Compensation Committee decided on 14 January 2010, that Chelsea would pay an initial fee of £3.5 million with additional payments of £500,000 after each of 10, 20, 30 and 40 first-team competitive appearances. There will also be a further payment of £1 million if the player makes a full international appearance, and Manchester City will receive 15 per cent of any sell-on fee if Sturridge is transferred.[20]

His first goal for Chelsea was on his debut, a friendly match against Seattle Sounders on 18 July 2009, in the twelfth minute of the match he scored the first goal. Chelsea won the match 2–0.[21] Sturridge played his second game for Chelsea against former Chelsea manager José Mourinho's Internazionale, during which he won a penalty that player Frank Lampard scored from. He made his Premier League debut for Chelsea on 18 August 2009 against Sunderland, coming on for Didier Drogba.[22] On 16 September 2009, Sturridge scored a hat-trick in a reserve game against Ipswich Town.[23] On 28 October 2009, he made his first start for the club in a League Cup win against Bolton Wanderers at Stamford Bridge.

On 20 December, Sturridge came on as a substitute at half time against West Ham United and won Chelsea a controversial penalty which Lampard converted. He made his first start in the Premier League for Chelsea away against Birmingham City on Boxing day. He scored his first two goals for Chelsea against Watford in the FA Cup third round on 3 January 2010.[24] He continued to show his ability with a real poachers effort in a 2–0 victory in the FA Cup against Preston North End, scoring his third goal for Chelsea in January.[citation needed] On 13 February 2010, he netted again against Cardiff City, as Chelsea won 4–1.[25] He became the only player to score in the third, fourth and fifth round of the FA Cup that season. Daniel is one of only five English forwards to have played in the Champions League that season (the others being Michael Owen, Wayne Rooney, Danny Welbeck and Matt Derbyshire).

Sturridge scored his first League goal for Chelsea on 25 April 2010, in a 7–0 victory over Stoke City at Stamford Bridge, by latching onto a through ball, before rounding the goalkeeper, Asmir Begovic, and slotting the ball home.[26]

During the 2010 FA Cup Final he came on as a 90th minute substitute for Chelsea, as they won 1–0 against Portsmouth. Sturridge finished the 2009–10 FA Cup campaign as the leading scorer for Chelsea with four goals.

On 15 September 2010 Sturridge made his full UEFA Champions League debut against Slovakian side MŠK Žilina. He scored on his debut (thus his first UEFA Champions League goal) in a 4–1 away victory.[27] In the Premier League, in a 1–0 loss to his former club Manchester City, Sturridge came on as a substitute for striker Didier Drogba. He scored his second goal in the Champions League against Žilina, which Chelsea went on to win 2–1. Later on that season he scored two right footed goals against Ipswich Town F.C.[28]

On 31 January 2011, Sturridge agreed to join Bolton Wanderers on a loan deal until the end of the season.[29] He made his debut, coming on as a substitute, two days later at home to Wolverhampton Wanderers, scoring his first goal in the process.[30] He followed this with another goal in the defeat to Tottenham Hotspur the following weekend, in which he made his first start,[31] before scoring his third goal in three games in the 2–0 victory over Everton.[32] When Sturridge scored the equaliser against Newcastle United in his fourth game, he became only the sixth player to score in his first four games for a club in the Premier League.[33] Sturridge continued to make an impact at Bolton and finished his loan spell with 8 goals in 12 appearances at the club. Having never been booked in his career, Sturridge received his first ever red card in the final game of the season against former club Manchester City.

The pre-season prior to the start of the 2011–12 season, Sturridge was given chances to prove himself by new manager André Villas-Boas and impressed, scoring an impressive solo effort against Chinese club Kitchee and then scoring a brace against Scottish giants Rangers. Chelsea chairman, Bruce Buck later confirmed that if Sturridge had not impressed in the pre-season, he would have probably gone out on loan again.

Having received a red card in the final game for Bolton, Sturridge was suspended for the first three competitive matches in the 2011–12 season for Chelsea. Despite rumours linking him with a move away on deadline day, Sturridge remained in West London, with strong support from Villas-Boas, by saying 'he would have been playing if he was not suspended from last season'. During his comeback from suspension, in the fixture against Sunderland at the Stadium of Light, Sturridge started and scored with a back-heel in the 50th minute to put Chelsea up 2-0. Chelsea went on to win the match 2-1.[34][35][36] Sturridge returned to the Reebok Stadium on 2 October 2011. He scored twice within the first 30 minutes, the first a header after 90 seconds from a corner and the second a long shot from outside the box, which the goal keeper Adam Bogdan made an error of saving.[37] He also made an assist to Frank Lampard's goal in the 15th minute of the match, which ended 5-1.[38] On 15 October 2011, he scored against Everton in a 3-1 win, giving him four league goals in four games.[39] Sturridge then came on a sub, on 90 minutes against Everton, to put Chelsea in the last eight of the League Cup, in which he scored a 116th minute goal, which saw Chelsea win 2-1 in extra time. On 20 November 2011, Sturridge came on as a second half substitute and scored his fifth goal of the 2011-12 season, in a 2-1 defeat to Liverpool.[40] 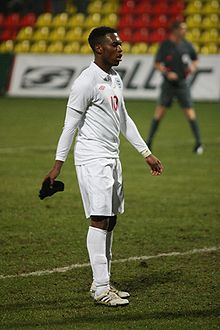 Sturridge playing for England U21

Sturridge has represented England at, under-16, under-17, Under-18, under-19, Under-20 and under-21 levels.[13] Most notably he scored at the European Under-17 Championship in the final against Italy, twice against Holland for the Under 18 side in 2007, he netted again in the Under-19 European Championships against Holland. He scored the only goal for England U-21 in a 1–1 draw against Greece U-21 in Greece and scored his second U-21 goal in the 1–0 win over Portugal. He was named in the England Under-21 squad for the 2011 UEFA European Under-21 Football Championship.

On 6 November 2011, Sturridge was handed his maiden England call-up by being named in the England squad by Fabio Capello for the friendlies against Spain and Sweden, after excelling for Chelsea.[41][42] He was an unused substitute in a 1-0 victory against Spain but Capello promised that he would play against Sweden the following Tuesday. He made his debut coming on as a second half substitute for me.

Sturridge is known for his pace, dribbling ability and powerful long shots. He has been compared to Brazilian striker Hulk by Chelsea manager André Villas-Boas. Villas-Boas said: “Daniel offers me a few of the characteristics I had with Hulk when I was with him in Porto." He went onto say: "He is an extremely quick player, and he has technique at pace."[43][44]