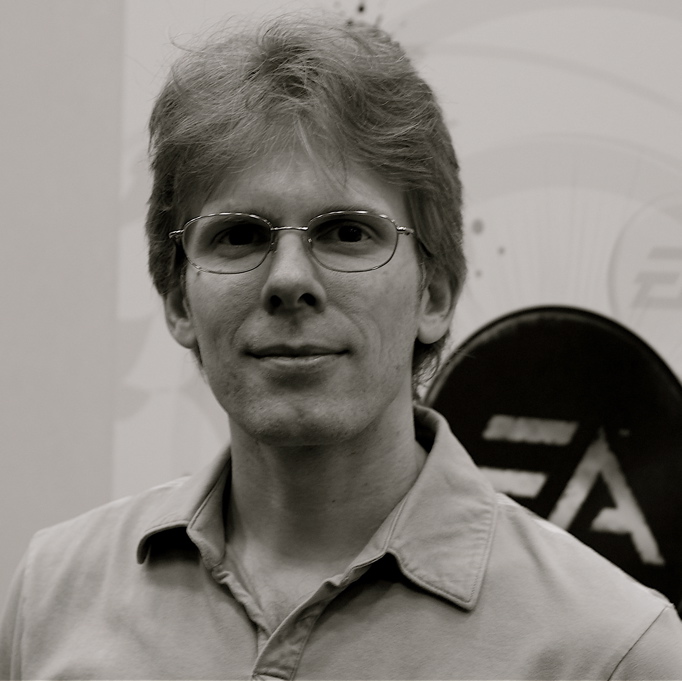 Though Carmack is best known for his innovations in 3D graphics, he is also a enthusiast and the founder and lead engineer of .

Carmack, son of local television news reporter Stan Carmack, grew up in the where he became interested in s at an early age. He attended Shawnee Mission East High School in and in nearby . As reported in David Kushner's "", "when Carmack was 14, he broke into a school to steal computers, was arrested, and sent for psychiatric evaluation (the report mentions "no empathy for other human beings"). Carmack was then sentenced to a year in a juvenile home. ... he was asked "if you had not been caught, would you consider doing it again?" he answered "probably" but when the therapist presented this evaluation he neglected to repeat "if you had not been caught" from his statement". ["Masters of Doom" by David Kushner. Quoted in "", Vol. 012, Issue 23. [http://www.weeklystandard.com/Content/Public/Articles/000/000/013/305yuvkp.asp?pg=2] ] After scoring a 1500 on the (780 Math, 720 Verbal),Fact|date=January 2008 he attended the for two semesters before withdrawing to work as a freelance programmer.

, a computer company in , hired Carmack to work on (an Apple IIGS publication), uniting him with and other future key members of id Software such as (not related). Later, this team would be placed by Softdisk in charge of a new, but short-lived, bi-monthly game subscription product called "Gamer's Edge" for the IBM PC (MS-DOS) platform. In 1990, while still at Softdisk, Carmack, Romero, and others created the first of the games, a series which was published by , under the distribution model, from 1991 onwards. Afterwards, Carmack left Softdisk to co-found id Software, where he remains.

He has pioneered or popularised the use of many techniques in computer graphics, including "" for , for "Hovertank 3-D", "Catacomb 3-D", and "Wolfenstein 3-D", which "Doom" became the first game to use, which he invented for "Quake", Carmack's Reverse (formally known as z-fail stencil shadows) which he devised for "Doom 3", and , used in . While he was not the first to discover Carmack's Reverse, he developed it independently without knowing of the prior research done on the subject.Fact|date=May 2008

Carmack's engines have also been licensed for use in other influential first-person shooters such as "Half-Life", "" and "Medal of Honor".

When Carmack was on vacation with his wife, he ended up playing some games on her cellphone, and he realized that the games weren't any good. He then decided he was going to make a good mobile game. When he got back from his vacation he revealed that he had started working on "". [Citation| first= Mike|last= Snider| title =Q&A with id Software's Kevin Cloud and Steve Nix| newspaper =| year =2007| date =18 July| url = http://www.usatoday.com/tech/bonus/2007-07-16-q&a-id_N.htm?csp=34]

Around the year 2000, Carmack became interested in rocketry, a hobby of his youth. Reviewing how much money he was spending on customizing Ferraris,Fact|date=February 2008 he realized he could do significant work in rocketry and . He began by giving financial support to a few local amateur groups before starting .Fact|date=February 2008 He taught himself aerospace engineering and is the lead engineer of the company. Since then he has made steady progress toward his goals of suborbital space flight and eventual orbital vehicles.

Carmack is a well-known advocate of , and has repeatedly voiced his opposition to s, which he equates to "mugging someone". [ [http://slashdot.org/comments.pl?sid=151312&cid=12701745 "Are video game patents next?"] article] He has also contributed to open source projects, such as starting the initial port of the to and working to improve the OpenGL drivers for Linux through the project.

Carmack is also noted for his generous contributions to charities and gaming communities. Some of the recipients of Carmack's charitable contributions include his former high school, promoters of open source software, opponents of software patents, and game enthusiasts. In 1997 he gave away one of his s (a 328 model) as a prize to , the winner of the "Quake" "Red Annihilation" tournament.

Id Tech 4 will also be . At 2007, Carmack said to :"I mean I won't commit to a date, but the Doom 3 stuff will be open source." [http://www.linuxgames.com/news/feedback.php?identiferID=9374&action=flatview]

Carmack met his wife at 1997 when she visited id's offices. As a bet, Kang challenged Carmack to sponsor the first All Female Quake Tournament if she was able to produce a significant number of participants. At the time, female FPS computer gamers were more myth than reality. Kang's tournament, actually run by the Quake Clanring, had over 600+ registered female gamers trying to win a trip for 2 to California to win $2,000+ worth of prizes.Fact|date=February 2007 Among them were Kornelia, KillCreek, and the PMS Clan: some of the most famed female players at the time.Fact|date=February 2007 Carmack and Kang married in January 2000 and had a son in 2004. Carmack has a (previously a .plan), and also occasionally posts comments to . In 2008, Carmack autographed a for Child's Play. Due to a misunderstanding from the heads of the charity, it was instead offered as a prize in a contest. This mistake has since been rectified: the signed product was recovered and will be put on eBay to raise money for the charity. The prize has been replaced with a regular DS. [ [http://www.penny-arcade.com/2008/01/07 Penny Arcade] ]

As a game developer, Carmack stands apart from many of his contemporaries by avoiding commitment to a final release date for any game he is developing. Instead, when asked for a release date on a new title, Carmack will usually reply that the game will be released "when it's done." [ [http://pc.gamespy.com/articles/896/896763p6.html Carmack's 2008 keynote at QuakeCon] ] Employees at Apogee, in their past years the publishers of games by id Software, adopted this business practice as well [ [http://forums.3drealms.com/vb/showthread.php?p=654680#post654680 Forum reply posted by George Broussard of 3DRealms] ] .

* In 1999, Carmack appeared as number 10 in TIME's list of the 50 most influential people in technology. [http://www.time.com/time/digital/digital50/10.html]
* On , , Carmack became the fourth person to be inducted into the , an honor bestowed upon those who have made revolutionary and innovative achievements in the video and computer game industry.
* In 2003, Carmack was one of the subjects of the book "", a chronicle of id Software and its founders.
* In 2005, the film "Doom" featured a character named "Dr. Carmack", in recognition of Carmack who co-created the original game.
* In March 2006, Carmack was added to the , an event that recognizes the developers and games with the most impact on the industry. [ [http://www.walkofgame.com Walk of Game] ]
* In January 2007 in Las Vegas, Nevada, John Carmack and id software were awarded with two . The Science, Engineering & Technology for Broadcast Television, which includes broadcast, cable and satellite distribution, and secondly, Science, Engineering and Technology for Broadband and Personal Television, encompassing interactive television, gaming technology, and for the first time, the Internet, cell phones, private networks, and personal media players. is the very first independent game developer to be awarded an Emmy since the Academy began honoring technology innovation in 1948. [ [http://www.emmyonline.org/releases/pdf/58th_Tech_Eng_winners.pdf Emmy Awards] ]
* In September 2007, Carmack appeared on Discovery Channel Canada Daily Planet, featuring his rocket designs along with the Armadillo Aerospace team.
* In 2008 Carmack was honored at the 59th Annual s for "Quake"'s pioneering role of user modifiability. [ [http://kotaku.com/342028/2008-tech-emmy-winners 2008 Tech Emmy Winners] from Kotaku.com] He is the only ever honored twice by the , having been given an Emmy Award in 2007 for his creation of the 3D technology that underlies modern s.Fact|date=May 2008 Along with and , Carmack is one of only three game developers to accept awards at both the Technology & Engineering Emmy Awards and at the .Fact|date=May 2008