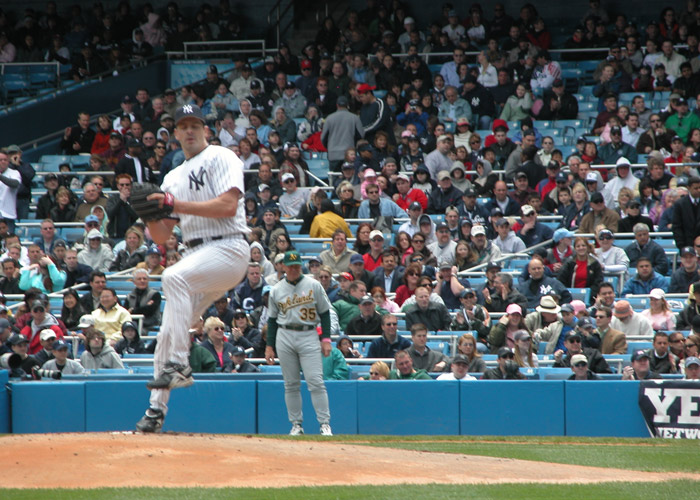 James Kevin Brown (born , in ) is a former . (Because two other MLB players named Kevin Brown had careers that overlapped with his, he is sometimes incorrectly referred to in baseball documents as Kevin J. Brown.)

Brown attended in and was a student and a letterman in football, , and .

Brown became a following the strike settlement in by|1994 and signed with the for a season, posting a 10-9 record with 117 strikeouts and a 3.60 ERA.

In the 1997 , Brown, riddled with the , proceeded to pitch a in Game Six, defeating the and helping the Marlins reach the , which they eventually won over the .

Following the disassembly of the Marlins' championship team, Brown was traded to the where he posted an 18-7 record with a career-high 257 strikeouts and a 2.38 ERA, finishing third in the Cy Young Award voting. He helped to lead the Padres to the , but not before blowing a save in Game 5 of the NLCS during a rare relief appearance.

Following the by|1998 season, Brown again became a free agent. He signed a lucrative contract with the Los Angeles Dodgers for 7 years/$105 million , becoming the first $100 million man in baseball. Many fans, both in San Diego and nationally, were taken aback by the immensity of the contract given to a player in his mid 30's (almost $40 million more than the Padres offer, the next highest offer he received), and also the choice of team, given Brown expressed a desire to play in a city closer to his Georgia home than San Diego during the season. Enrique Rojas of called the contract "one of the worst deals ever from a team's point of view" because Brown averaged only nine wins per season and was frequently injured during the seven years of the deal. [ [http://sports.espn.go.com/mlb/columns/story?id=2518991 ESPN - Pavano, Beltre haven't lived up to contracts - MLB ] ]

His first season in Los Angeles, he posted an 18-9 record with 221 strikeouts and a 3.00 ERA. After leading the NL in ERA during an injury-plagued by|2000 season, his performance began to dwindle as Brown was hampered by injuries and poor run support. In by|2003, Brown rebounded, producing a respectable 14-9 record with 185 strikeouts and a 2.39 ERA, although as Bill Plaschke noted following the release of the Mitchell Report "(his numbers that year are) no longer believe(able)." [cite news |firstname=Bill |lastname=Plaschke |title=A sullied part of Dodgers' history |publisher= |url=http://www.latimes.com/sports/la-sp-plaschkela14dec14,1,5849997.column?page=3&ctrack=1&cset=true&amp;ctrack=1&amp;cset=true |date=2007-12-14 |accessdate=2007-12-14 ]

On December 11, 2003, Brown was traded to the as part of a deal that sent , , Brandon Weeden, and $2.6 million in cash to Los Angeles. He went on to a 10-6 record with a 4.09 ERA, but experienced health problems during the season. Toward the end of the season, Brown, leaving Yankee manager 's office in anger, punched the wall outside, breaking his left hand. Brown would be out of action for the remainder of the season. He would pitch in the post season, pitching six innings against Minnesota and only allowing one run in the . But it was his performance in Game 7 of the 2004 American League Championship Series that he is remembered for, lasting less than two innings, giving up a two run homer to .

Brown would attempt to come back in by|2005, but missed several games during the season due to injury. He would go 4-7 with a 6.50 ERA. On , by|2006, Brown announced his retirement. [ [http://seattlepi.nwsource.com/scorecard/mlbnews.asp?articleID=158040 Seattle Post-Intelligencer: MLB ] ] He currently resides in Macon, Georgia.

The Mitchell Report named Brown as one of a group of implicated in steroid use. The report documents allegations by that he sold Brown and over a period of two or three years beginning in either 2000 or 2001. Radomski claims he was introduced to Brown by . Radomski's claims were supported by an Express Mail receipt dated , 2004, addressed to Brown. The report also contains notes from a meeting of Dodgers executives in 2003 during which they question the medication Brown takes and include a note stating "Steroids speculated by GM". Brown declined to meet with the Mitchell investigators. [cite web | url = http://assets.espn.go.com/media/pdf/071213/mitchell_report.pdf | title = Mitchell Report pp. 214-17| format = PDF]

LA Times sportswriter states that by 2003 "it was obvious to me...(and) Dodger management that...(he was) probably on steroids. We would even talk about it while watching their bulging, straining bodies from the dugout during batting practice. But the players would admit nothing, so there was nothing I could write."

Brown was a pitcher who had the rare talent of relying both on movement and velocity. His main pitch was a sinking that averaged 93 - 96 mph, with tremendous tailing, downward movement. He could spot it to either side of the plate. Batters facing him generally pounded this pitch into the ground or missed it entirely. He complemented this pitch with a sharp in the high 80s, and a solid split fingered fastball he used against hitters or for another look. Fact|date=August 2007