Occupancy in building construction and building codes is the use or intended use of a building or part thereof for the shelter or support of persons, animals or property. A closely related meaning is the number of units in such a building that are rented or leased, or otherwise in-use. The lack of occupancy in this sense is a vacancy.

It is possible to have multiple occupancies (or building uses) within one building. For instance, one may have a high-rise building, where the lower levels are occupied by retail stores, whereas the upper levels could be residential. Different occupancies within one building are separated by a fire barrier[1] with a defined fire-resistance rating. It is common for a penetration, such as a fire door, to have a fire protection rating lower than the wall fire resistance rating in which it is installed[2]. For example, a two-hour fire separation normally requires fire doors rated at 90-minutes.

For some high challenge occupancies[3] the code requirements for an occupancy separation are more stringent than for other fire-barriers, even with an identical fire-resistance rating. In this case, an occupancy separation with a two-hour fire-resistance rating may not be able to de-rate its closures, such fire doors or firestops. For example, a two-hour rated high challenge fire wall[4] requires 2 hr rated fire doors.

Firestops in occupancy separations are also more likely to be required not only an equal fire protection rating (a fire-resistance rating for closures) but must also provide a temperature rating, such that the components of the firestop systems, including the penetrants, are not permitted to rise in temperature above 140°C (284°F) on average or 180°C (356°F) on any single point, so as to lower the likelihood of auto-ignition on the unexposed side. In this manner, occupancy separations are treated similarly to fire walls, which are structurally stable in case of a fire, limiting fire-induced building collapse.

In this sense, there are two occupancies in most single-family homes: the garage and the living space of the home. Because automobile gasoline or petrol is flammable, an occupancy separation is often required between the two, should there be a vehicle fire. Water heaters and central heating are often placed in this space as well, for their use of natural gas, propane, or other fossil fuels in combustion. This also helps to prevent carbon monoxide poisoning. 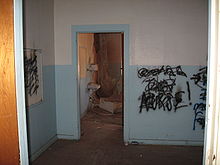 Occupancy can also refer to the number of units in use, such as hotel rooms, apartment flats, or offices. When a motel is at full (100%) occupancy, a NO VACANCY neon sign is often turned on (though the sign often still says VACANCY at other times). Office buildings and apartments in particular aim for full occupancy, but if too many are built in an area this is often not the case. Completely vacant buildings can also attract crime, and are eventually targeted for redevelopment or at least renovation.

Occupancy can also mean the number of persons using an undivided space, such as a meeting room, ballroom, auditorium, or stadium. As with building codes, fire-protection authorities often set a limit on the number of people that can occupy a space, primarily because they must be able to leave the building through the available number of exits in a reasonable amount of time, without tripping or trampling each other in a panicked stampede, possibly blinded by smoke. The integrity of a structure may also be at stake, because too many people will put excessive weight and other forces, leading in some cases to a collapse.

An occupancy sensor is a device that can tell if someone is in a room, and is often used in home automation and security systems. These are typically more advanced than motion sensors, which can only detect motion.

In transport engineering, occupancy can refer to:

Synonyms:
Possession (for the time), tenure, holding, use, occupation, enjoyment