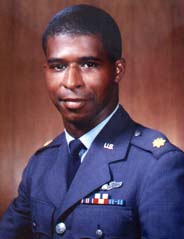 Robert Henry Lawrence, Jr. (, - , ) was a office and the first . At the age of 16, he graduated in the top 10 percent from Englewood High School in Chicago, IL. At the age of 20, he graduated from with a Bachelor's Degree in Chemistry. At Bradley, he distinguished himself as Cadet Commander in the Air Force and received the commission of in the Air Force Reserve Program.

At the age of 21 he had become an Air Force pilot after completing flight training at .

At 22, he married Barbara Cress, daughter of Dr. and Mrs. Henry Cress of Chicago. By the time he was 25, he had completed an Air Force assignment as an instructor pilot in the training aircraft for the German Air Force.

In 1965, Lawrence earned a in from . His dissertation related to that part of chemistry which involved the conversion of tritium rays to methane gas. [ [http://www.africanamericans.com/RobertLawrence.htm African Americans - Air Force Major Robert H. Lawrence Jr., First African American Astronaut ] ] [ [http://www.bradley.edu/las/chm/scholar/] ]

He was a senior pilot, accumulating well over 2,500 flight hours--2,000 of which were in jets. Lawrence flew many tests in the Lockheed to investigate the gliding flight of various unpowered spacecraft returning to Earth from orbit, such as the North American rocket-plane. His research was instrumental in proving the steep-descent gliding concept that would later be employed with the .

In June 1967, Lawrence successfully completed the Air Force Flight Test Pilot Training School at Edwards AFB, California. That same month he was selected by the USAF as an astronaut in the Air Force's Program, thus becoming the first African-American astronaut. The MOL project would eventually lead to today's .

Lawrence was killed on , , in the crash of an at , . He was flying backseat on the mission as the instructor pilot for a flight test trainee learning the steep-descent glide technique. The pilot flying made such an approach but flared too late. The airplane struck the ground hard, the main gear failed, and the airplane caught fire. The front seat pilot of the aircraft successfully ejected upon ground impact and survived the accident, but with major injuries. By the time Lawrence ejected, the airplane had rolled onto one side and tragically, his ejection seat, with Lawrence still in it, described a low angle path and struck the ground, killing him instantly.During his brief career, Lawrence earned the , the , and was posthumously awarded the medal.

After many years of relative obscurity, his achievements, dedication, and sacrifices for the nation were finally recognized on ,, when his name was inscribed on the at the in . [http://www.cnn.com/TECH/9712/08/astronaut.ap/]

Lawrence was a member of the fraternity.