Boston City Hall, part of Government Center, Boston, Massachusetts
(Gerhardt Kallmann and N. Michael McKinnell, 1969). The structure illustrates typical (but not necessary) Brutalist characteristics such as top-heavy massing, the use of slender base supports, and the sculptural use of raw concrete. 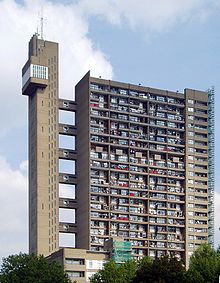 The Interior of the Phillips Exeter Academy Library, 1965-1971, by Louis Kahn. 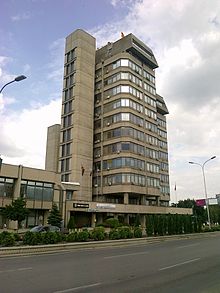 The building of the National bank of Macedonia. 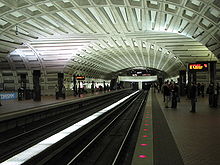 All stations of the Washington Metro system display Brutalist characteristics 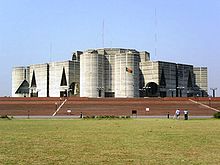 The Habitat 67 in Montreal, Quebec, Canada

The British architects Alison and Peter Smithson coined the term in 1953, from the French béton brut, or "raw concrete", a phrase used by Le Corbusier to describe the poured board-marked concrete with which he constructed many of his post-World War II buildings. The term gained wide currency when the British architectural critic Reyner Banham used it in the title of his 1966 book, The New Brutalism: Ethic or Aesthetic?, to characterize a somewhat recently established cluster of architectural approaches, particularly in Europe.[1] 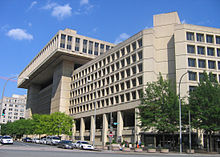 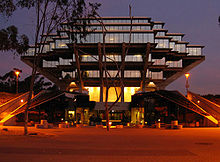 The University of California, San Diego's Geisel Library is one of the most famous examples of Brutalist architecture, and has been featured in a number of science fiction movies.

Brutalist buildings usually are formed with striking repetitive angular geometries, and, where concrete is used, often revealing the texture of the wooden forms used for the in-situ casting. Although concrete is the material most widely associated with Brutalist architecture, not all Brutalist buildings are formed from concrete. Instead, a building may achieve its Brutalist quality through a rough, blocky appearance, and the expression of its structural materials, forms, and (in some cases) services on its exterior.[citation needed] For example, many of Alison and Peter Smithson's private houses are built from brick. Brutalist building materials also include brick, glass, steel, rough-hewn stone, and gabion (also known as trapion).[citation needed] Conversely, not all buildings exhibiting an exposed concrete exterior can be considered Brutalist, and may belong to one of a range of architectural styles including Constructivism, International Style, Expressionism, Postmodernism, and Deconstructivism.

Another common theme in Brutalist designs is the exposure of the building's functions—ranging from their structure and services to their human use—in the exterior of the building. In the Boston City Hall (illustration right), designed in 1962, the strikingly different and projected portions of the building indicate the special nature of the rooms behind those walls, such as the mayor's office or the city council chambers. From another perspective, the design of the Hunstanton School included placing the facility's water tank, normally a hidden service feature, in a prominent, visible tower.

Brutalism as an architectural philosophy, rather than a style, was often also associated with a socialist utopian ideology, which tended to be supported by its designers, especially Alison and Peter Smithson, near the height of the style. Critics argue that this abstract nature of Brutalism makes the style unfriendly and uncommunicative, instead of being integrating and protective, as its proponents intended. Brutalism also is criticised as disregarding the social, historic, and architectural environment of its surroundings, making the introduction of such structures in existing developed areas appear starkly out of place and alien. The failure of positive communities to form early on in some Brutalist structures, possibly due to the larger processes of urban decay that set in after World War II (especially in the United Kingdom), led to the combined unpopularity of both the ideology and the architectural style.

The best known early Brutalist architecture is the work of the Swiss architect Le Corbusier, in particular his Unité d'Habitation (1952) and the 1953 Secretariat Building in Chandigarh, India.

Brutalism gained considerable momentum in the United Kingdom during the mid twentieth century, as economically depressed (and World War II-ravaged) communities sought inexpensive construction and design methods for low-cost housing, shopping centres, and government buildings. Nonetheless, many architects chose the Brutalist style even when they had large budgets, as they appreciated the 'honesty', the sculptural qualities, and perhaps, the uncompromising, anti-bourgeois, nature of the style.

Combined with the socially progressive intentions behind Brutalist streets in the sky housings such as Corbusier's Unité, Brutalism was promoted as a positive option for forward-moving, modern urban housing. In practice, however, many of the buildings built in this style lacked many of the community-serving features of Corbusier's vision, and instead, developed into claustrophobic, crime-ridden tenements. Robin Hood Gardens is a particularly notorious example, although the worst of its problems have been overcome in recent years. Some such buildings took decades to develop into positive communities. The rough coolness of concrete lost its appeal under a damp and gray northern sky, and its fortress-like material, touted as vandal-proof, soon proved vulnerable to spray-can graffiti.

In the United Kingdom, Architects associated with the Brutalist style include Ernő Goldfinger, wife-and-husband pairing Alison and Peter Smithson, Richard Seifert, Basil Spence, John Bancroft and, to a lesser extent perhaps, Sir Denys Lasdun. In Australia, three examples of the Brutalist style described as the country's finest are Robin Gibson's Queensland Art Gallery, Ken Woolley's Fisher Library at the University of Sydney (his State Office Block is another) and the High Court of Australia by Colin Madigan in Canberra.[2] John Andrews's government and institutional structures in Australia also exhibit the style. In Asia there are government buildings by Louis Kahn. Paul Rudolph and Ralph Rapson, from the United States are both noted Brutalists. Walter Netsch is known for his Brutalist academic buildings (see above). Marcel Breuer was known for his "soft" approach to the style, often using curves rather than corners. Clorindo Testa in Argentina created the Bank of London and South America, one of the best examples of the fifties. More recent Modernists such as I.M. Pei and Tadao Ando also have designed notable Brutalist works. In Brazil, the style is associated with the Paulista School and is evident in the works of Pritzker Architecture Prize-winning architect Paulo Mendes da Rocha (2006). In the Philippines, Leandro Locsin designed the massive brutalist structures, the Cultural Center of the Philippines and the Philippine International Convention Center. In New Zealand, Sir Miles Warren and his practice Warren & Mahoney led the development of the so-called "Christchurch School" of architecture, which fused Brutalist architectural style with Scandinavian and Japanese values of straightforwardness. Warren's buildings have had a significant effect on New Zealand's public architecture.

The Roger Stevens Building at the University of Leeds is the centre piece to a large complex of Brutalist buildings connected by skyways.

In the late 1960s, many campuses in North America were undergoing expansions and, as a result, there are a significant number of Brutalist buildings at American and Canadian universities, beginning with Paul Rudolph's 1958 Yale Art and Architecture Building. Rudolph's design for the University of Massachusetts Dartmouth is an example of an entire campus designed from scratch in the Brutalist style. Likewise, architect Walter Netsch designed the entire University of Illinois-Chicago Circle Campus (now the East Campus of the University of Illinois at Chicago) under a single, unified brutalist design.[3] The original "inner ring" of buildings at the University of California, Irvine was designed by a team of architects led by William Pereira in what he called a "California Brutalist" style.[4]

The proposed demolition of the Third Church of Christ, Scientist in Washington, D.C. has resulted in court battles between historic preservationists and church members.

Brutalism has some severe critics, including Charles, Prince of Wales. His speeches and writings on architecture have excoriated Brutalism, calling many of the structures "piles of concrete". "You have to give this much to the Luftwaffe", said Prince Charles at the Corporation of London Planning and Communication Committee's annual dinner at Mansion House in December 1987. "When it knocked down our buildings, it didn't replace them with anything more offensive than rubble."[5] Much of the criticism comes not only from the designs of the buildings, but also from the fact that concrete façades do not age well in damp, cloudy maritime climates such as those of northwestern Europe. In these climates, the concrete becomes streaked with water stains and sometimes with moss and lichens, and rust leaches from the steel reinforcing bars.

At the University of Oregon campus, outrage and vocal distaste for Brutalism led, in part, to the hiring of Christopher Alexander and the initiation of The Oregon Experiment in the late 1970s. This led to the development of Alexander's A Pattern Language and A Timeless Way of Building.

In recent years, the bad memories of under-served Brutalist community structures have led to their demolition in communities eager to make way for newer, more traditionally-oriented community structures. Despite a nascent modernist appreciation movement, and the identified success that some of this style's offspring have had, many others have been or are slated to be demolished.

Theodore Dalrymple, a British author, physican, and political commentator, has written for City Journal that brutalist structures represent an artifact of European philosophical totalitarianism, a "spiritual, intellectual, and moral deformity." He called the buildings "cold-hearted", "inhuman", "hideous", and "monstrous". He stated that the reinforced concrete "does not age gracefully but instead crumbles, stains, and decays", which makes alternative building styles superior.[6]

Although the Brutalist movement was largely dead by the mid-1980s, having largely given way to Structural Expressionism and Deconstructivism, it has experienced an updating of sorts in recent years. Many of the rougher aspects of the style have been softened in newer buildings, with concrete façades often being sandblasted to create a stone-like surface, covered in stucco, or composed of patterned, pre-cast elements. Modernist architects taking this approach in recent projects include Steven Ehrlich, Ricardo Legorreta, and Gin Wong. The firm of Victor Gruen and Associates has revamped the style for the many courthouse buildings it has been contracted to design. Architects from Latin America have been reviving the style on a smaller scale in recent years. Brutalism has recently experienced a major revival in Israel, due to the perceived sense of strength and security the style creates.

The Regenstein Library at the University of Chicago, designed in the late 1960s by Walter Netsch

Even in Britain, where the style was most prevalent (and later the most reviled), a number of buildings recently (as of 2006) have appeared in an updated Brutalist style, including deRijke Marsh Morgan's 1 Centaur Street in Lambeth, London, and Elder & Cannon's The Icon in Glasgow in Scotland. The 2005 Stirling Prize shortlist contained a number of buildings (most notably Zaha Hadid's BMW Central Building and the eventual winner, Enric Miralles' Scottish Parliament Building) featuring significant amounts of exposed concrete, something that would have been regarded as aesthetically unacceptable when the prize was inaugurated nine years previously.

There also has been a reappraisal of first-generation Brutalist architecture and a growing appreciation that dislike of the buildings often stems from poor maintenance and social problems resulting from poor management, rather than the designs themselves. In 2005 the British television channel Channel 4 ran a documentary, I Love Carbuncles, which placed the U.K.'s Brutalist legacy in a more positive light. Some Brutalist buildings have been granted listed status as historic and others, such as Gillespie, Kidd and Coia's St. Peter's Seminary, named by Prospect magazine's survey of architects as Scotland's greatest post-war building, have been the subject of conservation campaigns. The Twentieth Century Society has campaigned against the demolition of buildings such as the Tricorn Centre and Trinity Centre Multi-Storey Car Park.