listen (help·info)) is a political party in Serbia. It is described as a social liberal[2] or social democratic[2] party.

The Democratic Party was established on 16 February 1919 from unification of Sarajevo parties independent radicals, progressives, liberals and the Serbian part of the Croatian-Serbian coalition. Its first leader was Ljubomir Davidovic. The Politics of the Kingdom of Yugoslavia, the DS was a big influence. The election was always at the top of the received votes, but the government was only the 1919 and 1924 year, a total of less than one year.

After the Second World War, 1945, and the formation of a new, socialist state: Democratic Federal Yugoslavia where the government was the Communist Party, the Democratic Party and other parties there was no room, even though the Milan Grol, former leader of the Democrats, was the interim vice president of the Yugoslav Government under the leadership of the Communist Party leader, Josip Broz Tito. After the communists won the election November 1945. year, banned the work of all parties and the DS has disappeared from political life.[3][Third-party source needed]

On 11 December 1989, a group of intellectuals held a press conference and announced the renewal of the Democratic Party. Was not yet formed the legal basis for a multiparty system, but the atmosphere before the breakup of former Yugoslavia announced the end of one-party regime. With the conference is invited to join the first opposition party in Serbia.[4] Some of them were motivated into political action by what they perceived to be unsatisfactory national position of ethnic Serbs and Serbia within Yugoslav federation while others felt that activity in a political party could help address concerns about what they thought to be deteriorating state of democracy and human rights in the country. Up to that point in time, the former primarily acted through the Writers' Club (Udruženje književnika) while the latter channeled their activities through Social Sciences Institute (Institut društvenih nauka) and Philosophy Club (Filozofsko društvo). Sprinkled among the members of the newly re-established party were also some surviving members of the pre World War II DS party. Though the grip of the Communist League (SKJ), the only constitutionally allowed party in Yugoslav one-party political system, was not nearly as strong as it once was, DS members still feared the authorities reaction to the announcement of the DS party creation.[5]

Even before the founding conference was held, some differences of opinion over Kosovo issue surfaced among the members.[5] The party presidency was contested between Dragoljub Mićunović and Kosta Čavoški who were two of DS' most prominent and active members at the time. At the DS founding conference on 3 February 1990, Mićunović got more member votes and became president while Čavoški got named to the post of Executive Board (Izvršni odbor) president.

Under Mićunović, DS was not a party with strong leadership as the longtime university professor preferred the relaxed intellectual approach to the rigid internal party structure.

DS members participated in the first anti-government protests in 1990. At the parliamentary elections on 9 December 1990, the party was on the ballot in 176 of 250 electoral districts, getting 374,887 votes that translated into 7 assembly seats. Only several days prior to the elections, Čavoški left DS to form the Serbian Liberal Party (SLS). Other members like Nikola Milošević and Vladan Vasilijević left with him as well. Čavoški's lasting legacy in the DS was its national program as the party program stated until 1997 that "DS is working towards the re-unification of Serbian lands". Still, on the other hand DS had a very liberal economic program courtesy of economists Vladimir Gligorov and Slobodan Inić who were able to push it through as official party policy, despite being in minority, because most of the other members didn't really concern themselves with economic matters.[6] Both Giligorov and Inić later left DS when the party decided to throw its support behind Prince Tomislav Karađorđević at the FR Yugoslavia 1992 presidential elections.

At the 1992 parliamentary elections on 27 April (scheduled early due to disintegration of SFR Yugoslavia and formation of the new state entity FR Yugoslavia), DS fared poorly with 196,347 votes, down almost two hundred thousand votes compared to the previous election, giving the party only 6 assembly seats. Later that year in July, a much more serious fragmentation of the Democratic Party occurred when a large group led by Vojislav Koštunica left the party and established the Democratic Party of Serbia (DSS). Overnight, DS lost 40% of its membership including such prominent members as Borislav Pekić, Mirko Petrović, Đurđe Ninković, Vladeta Janković, Draško Petrović, Vladan Batić, etc. The immediate issue behind the split was their dissatisfaction with the DS decision not to enter the DEPOS coalition, however it also had a deeper cause as differences over the handling of the so-called national question had been brewing within DS for quite some time.

This is when the energetic 40-year-old DS founding member Zoran Đinđić began to assert himself a lot more within the party at a time when DS was burdened by various issues such as: dwindling membership following the departure of Koštunica's group, only 6 MPs in the assembly, and furthermore unclear political position. Though Mićunović was still formally president, it was Đinđić who was increasingly becoming the face of DS. By summer 1993 Đinđić had a clear personal vision of the party's future direction and aggressively set about implementing it. His primary concern became establishing strong infrastructure on the ground through a network of local municipal branches that answer to party's central in Belgrade. Zoran Živković, future short-time Prime Minister of Serbia, at the time DS member in the local Niš branch put it as follows:

Đinđić got his first chance to gauge the results of the new party approach even before he formally became its president. In October 1993, Serbian president Slobodan Milošević dissolved the parliament, scheduling the new parliamentary elections for 19 December 1993. Supported by a carefully crafted media and marketing campaign featuring memorable "Pošteno" slogan, DS recorded its best result to date with 497,582 votes, giving them 29 assembly seats. However, despite tremendous improvement over previous elections the party was still well behind Milošević's SPS, DEPOS coalition (headed by Vuk Drašković's SPO), and Vojislav Šešelj's SRS.

At the party conference in January 1994, Đinđić became the new party president, completely pushing out Mićunović in the process. Though many members didn't like the way this transfer of power was executed within the party, symbolically referring to it as "oceubistvo" (father murder), many others such as founding member Gojko Đogo took some positives from the new approach introduced by Đinđić:

Đinđić worked hard to move DS away from what he himself occasionally referred to in derisive terms as the "debate club" towards a modern and efficient organization that functions according to the management model of a capitalist company.[7] Mićunović soon left DS, founding a non-governmental organization Center for Democracy that eventually transformed into Democratic Centre (DC). Others that followed him to the DC were Desimir Tošić, Vida Ognjenović, Bora Kuzmanović, as well as many other prominent and respected DS party members. His view of the events of the period: 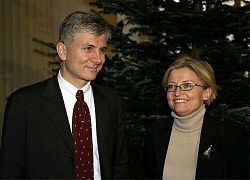 Though a much better organized party under Đinđić, DS still experienced trouble formulating a clear stance on the national question in the former Yugoslavia. Đinđić's own actions perhaps made a good illustration of this seemingly confused standing on both sides of the issue. On one hand Đinđić basically refused to even acknowledge the national question as a real issue, making not a single mention of the Serbs living outside of Serbia in other parts of former Yugoslavia in his book Yugoslavia: The Unfinished State while on the other he maintained close links with Radovan Karadžić, the war leader of Bosnian Serbs, even visiting him at Pale in February 1994 when American forces threatened to bombard Bosnian Serb positions. This seeming flip-flopping on the national issue was often effectively used by DS' political opponents and Đinđić's critics on all sides of the political spectrum.

As the Bosnian War ended by the signing of the Dayton Peace Accord, in addition to his grip on power domestically Milošević enjoyed a stable support from the international community that recognized him as the "peace and stability factor in the Balkans". Next chance to dent his armour came at the November 1996 municipal elections, which the DS entered as part of an opposition coalition featuring SPO, DSS, and GSS. Democratic Party (at the time with a total of only 7,000 members across Serbia) joined Zajedno despite Đinđić's personal opposition to the move as he got outvoted on three separate occasions by other party members when the decision was discussed internally.[8] Following opposition victories in key Serbian cities such as Belgrade, Niš and Novi Sad, Milošević refused to recognize the results, sparking huge three month long peaceful protest marches by hundreds of thousands of citizens. Milošević caved in and acknowledged the results and on 21 February 1997 Đinđić got inaugurated as the mayor of Belgrade.

As the parliamentary elections got called for 21 December 1997, Đinđić made a bold and gutsy decision that DS will boycott them thus breaking up the Zajedno coalition.

In 1998, most of the student leaders of 1996-97 street protests (gathered around an organization called Studentski politički klub (SPK)) joined DS. On this occasion future prominent members such as Čedomir Jovanović, Čedomir Antić, and Igor Žeželj joined the party.

The fall of Slobodan Milošević regime in October 2000 occurred after street protests by hundreds of thousands of citizens. Democratic Party was the biggest party of the Democratic Opposition of Serbia block that won 64.7% of the votes in 2000 elections held in December 2000, getting 176 of 250 seats in the Parliamentary Assembly. In 2001 Zoran Đinđić was appointed the Prime Minister of Serbia at the head of the first post-Milosevic, post-Communist Government of Serbia sworn in on 21 January 2001.

In 2003, Zoran Đinđić, the Prime Minister of Serbia, was assassinated. Boris Tadić was elected new president of Democratic Party in 2004. 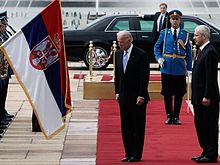 US Vice President Joe Biden meets Tadić during the state visit to Serbia in May 2009.

Tadić was nominated for the Serbian presidential elections in the same year, and won it while Democratic party was still in opposition in parliament.

Democratic Party received 915,854 popular votes or 22.71%, and thus won 64 out of 250 seats in parliament in the 2007 elections. Three of its seats went to the Sanjak Democratic Party, which formed a club with DS under Dušan Petrović as president and Milan Marković as vice-president. At the first session of the National Assembly of the Republic of Serbia the party mostly voted to refuse Martti Ahtisaari's proposal for Kosovo's solution.

Boris Tadić was re-elected at the Serbian presidential election, 2008.

The party has also taken three seats in the Community Assembly of Kosovo and Metohija, but has refused to sit in the Assembly until the situation in Kosovo is stabilized.[9]

In the most recent 2008 elections the pro-European coalition led by the DS won 38.5% of the popular vote, translating into 102 seats in the Serbian National Assembly, making it the largest political party bloc in the Serbian Parliament.