Major Charles Leroy Thomas (April 17, 1920-February 15, 1980) was a United States Army officer who was awarded the Distinguished Service Cross for his actions while a company commander during the capture of Climbach, France in 1944 — the second African American to be awarded one during World War II. This award was upgraded to the Medal of Honor awarded posthumously in 1997.

Prior to the war he had worked as a molder for the Ford Motor Company, and was a student at Wayne State University when he joined the Army in January 1942. He was assigned to the 614th Tank Destroyer Battalion, and sent to Officer Candidate School; he was commissioned as a Second Lieutenant in March 1943 and returned to his battalion, deploying with it to England and then to North-Western Europe.

On December 14, 1944, Thomas led a task force storming Climbach, consisting of a platoon from the 756th Tank Battalion and a reinforced company of the 411th Infantry Regiment, 103rd Infantry Division, led by a platoon of his tank destroyers. Approaching Climbach, Thomas' armored scout car was knocked out by enemy fire and he was wounded.

The lieutenant helped his crew out of the vehicle, but as he left the car's protection, he was again wounded in the chest, legs and arms. Despite his wounds, Thomas directed the dispersal and emplacement of the anti-tank guns, which then returned fire and covered the attempt by the rest of the task force to outflank the defenders. He briefed one of his platoon leaders, a junior lieutenant, on the general situation, and only when he was sure the situation was under control did he allow himself to be evacuated. The platoon continued to fight for four hours, losing two of its four guns and half its men as casualties (3 dead, 17 wounded).

The strong performance of the platoon ensured the capture of the town and forced the defenders to withdraw to the Siegfried Line; the unit was awarded a Distinguished Unit Citation (the first black combat unit, and the first unit attached to the 103rd Division, to be so honored) and its men received four Silver Stars and nine Bronze Stars. Thomas himself was awarded the Distinguished Service Cross for his part in the engagement, and returned home a hero, though he played down his role - "I know I was sent out to locate and draw the enemy fire, but I didn't mean to draw that much."

Thomas remained in the Army, and retired with the rank of Major. In the 1990s, following a study which indicated severe racial discrimination in the process of awarding medals during the war, it was recommended that seven Distinguished Service Crosses be upgraded to Medals of Honor, and Thomas was awarded the Medal of Honor posthumously on January 13, 1997. 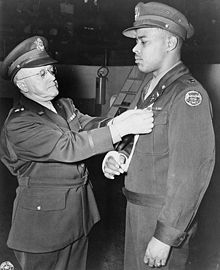 Thomas, then ranked Captain, being awarded the Distinguished Service Cross, 1945

For extraordinary heroism in action on December 14, 1944, near Climbach, France. While riding in the lead vehicle of a task force organized to storm and capture the village of Climbach, France, then First Lieutenant Thomas's armored scout car was subjected to intense enemy artillery, self-propelled gun, and small arms fire. Although wounded by the initial burst of hostile fire, Lieutenant Thomas signalled the remainder of the column to halt and, despite the severity of his wounds, assisted the crew of the wrecked car in dismounting. Upon leaving the scant protection which the vehicle afforded, Lieutenant Thomas was again subjected to a hail of enemy fire which inflicted multiple gunshot wounds in his chest, legs, and left arm. Despite the intense pain caused by these wounds, Lieutenant Thomas ordered and directed the dispersion and emplacement of two antitank guns which in a few moments were promptly and effectively returning the enemy fire. Realizing that he could no longer remain in command of the platoon, he signalled to the platoon commander to join him. Lieutenant Thomas then thoroughly oriented him on enemy gun dispositions and the general situation. Only after he was certain that his junior officer was in full control of the situation did he permit himself to be evacuated. First Lieutenant Thomas' outstanding heroism were an inspiration to his men and exemplify the highest traditions of the Armed Forces.