Onion routing is a technique for anonymous communication over a computer network. Messages are repeatedly encrypted and then sent through several network nodes called onion routers. Like someone unpeeling an onion, each onion router removes a layer of encryption to uncover routing instructions, and sends the message to the next router where this is repeated. This prevents these intermediary nodes from knowing the origin, destination, and contents of the message.

Onion routing was developed by Michael G. Reed (formerly of Extreme Networks), Paul F. Syverson, and David M. Goldschlag, and patented by the United States Navy in US Patent No. 6266704 (1998). As of 2009[update], Tor is the predominant technology that employs onion routing.

The idea of onion routing (OR) is to protect the privacy of the sender and recipient of a message, while also providing protection for message content as it traverses a network.

Onion routing accomplishes this according to the principle of Chaum's mix cascades: messages travel from source to destination via a sequence of proxies ("onion routers"), which re-route messages in an unpredictable path. To prevent an adversary from eavesdropping on message content, messages are encrypted between routers. The advantage of onion routing (and mix cascades in general) is that it is not necessary to trust each cooperating router; if any router is compromised, anonymous communication can still be achieved. This is because each router in an OR network accepts messages, re-encrypts them, and transmits to another onion router. An attacker with the ability to monitor every onion router in a network might be able to trace the path of a message through the network, but an attacker with more limited capabilities will have difficulty even if he or she controls routers on the message's path.

Onion routing does not provide perfect sender or receiver anonymity against all possible eavesdroppers—that is, it is possible for a local eavesdropper to observe that an individual has sent or received a message. It does provide for a strong degree of unlinkability, the notion that an eavesdropper cannot easily determine both the sender and receiver of a given message. Even within these confines, onion routing does not provide any guarantee of privacy; rather, it provides a continuum in which the degree of privacy is generally a function of the number of participating routers versus the number of compromised or malicious routers. 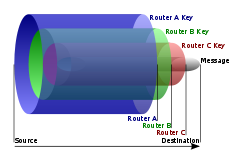 A routing onion (or just onion) is a data structure formed by 'wrapping' a plaintext message with successive layers of encryption, such that each layer can be 'unwrapped' (decrypted) like the layer of an onion by one intermediary in a succession of intermediaries, with the original plaintext message only being viewable by at most:

If there is end-to-end encryption between the sender and the recipient, then not even the last intermediary can view the original message; this is similar to a game of 'pass the parcel'.

An intermediary is traditionally called a node or router.

To create and transmit an onion, the following steps are taken:

Using this approach means each node in the chain is ideally aware of only 2 other nodes:

The peeling away of each layer of the onion makes it difficult or impossible to track the onion without compromising a significant number of nodes.

Tor is unencumbered by the original onion routing patents, because it uses telescoping circuits.[citation needed] Tor provides perfect forward secrecy and moves protocol cleaning outside of the onion routing layer, making it a general purpose TCP transport. It also provides low latency, directory servers, end-to-end integrity checking and variable exit policies for routers. Reply onions have been replaced by a rendezvous system, allowing hidden services and websites. The .onion pseudo-top-level domain is used for addresses in the Tor network.

The Tor source code is published under the BSD license. As of April 2011[update], there are about 2600 publicly accessible onion routers.[6]

The weak link in decryption is the human in the loop. Human computation is slow and expensive. Whenever a cypher needs to be sent to a human for semantic processing, this substantially increases the cost of decryption.

A decoy cypher can take the form of noise - sending copious messages of encrypted garbage plaintext. This decreases the signal-to-noise ratio for humans trying to interpret decrypted "plaintext" messages.

A decoy cypher can also take the form of misleading information - for example, in an onion cypher, most of the layers may contain information that when decrypted will produce a message that directly misleads the person reading it - often resulting in them taking actions against their interest - such as signalling that they are evesdropping by responding to a specific false signal, false flag attacks, or causing them to suspect the wrong parties. The actual message can still be contained at some level of the onion - but preferably not the lowest level - which may include an innocuous message so that if all layers are decrypted the core seems innocent. (see noise decoy cypher).