: "This article is about the musical film. For other uses, see " Infobox Film
name = The Student Prince 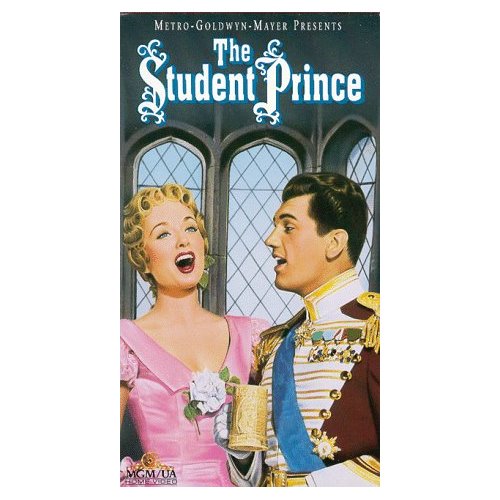 "The Student Prince" was a popular 1954 Cinemascope color film musical strangely starring, as the credits read, "the singing voice of ". Lanza had become embroiled in a bitter dispute with during production and the studio dismissed him. Under the terms of the settlement with Lanza, MGM retained the film rights to the soundtrack that Lanza had already recorded. appeared as Prince Karl, mouthing the songs that Lanza had recorded. starred as Kathie. Blyth had played opposite Lanza in the 1951 blockbuster "".

Ironically, the songs from this film, (including "Beloved" - written especially for the movie - and the well-remembered "Serenade", from the original show), would become some of those most identified with Lanza.

The film was directed by (who replaced the original director, ) and produced by . The was by and William Ludwig and was based on the operetta "" by and . New scenes and rewritten dialogue not found in the stage production were also added, although the basic plot remained the same. Additional songs were especially written by and . Many of Ms. Donnelly's original stage lyrics were completely changed for the film.

Albums made from the film

Lanza made two recordings of the songs from the movie - the first was a genuine film soundtrack recording, in . In 1959, after had become possible on records, another recording with Lanza was issued, but this time the role of Kathie was sung by soprano , and the original Dorothy Donnelly lyrics were restored. Both albums, however, also included the three additional songs written especially for the film version.

A young Prince, Karl, from a small sub-kingdom of the German Empire near the turn of the 20th century is sent off to get a university education in Heidelberg, Baden-Wuerttemberg. His grandfather was one of a handful of petty kings within German and Austrian central Europe. Fictional Karlsburg was small but very proud of their nationhood and traditions.

Karl has been raised most of his life for the military, but when it comes time for him to marry, the princess picked for him can't stand his stiff formality. This would not be such a problem but for the fact that Karlsburg has no money, only good blood. His tutor recommends that he be sent to University to learn "charm" and essentially develop some social skills. He (eventually) slips into the social mix, becomes accepted as a "good chap" by his student peers, and falls deeply in love with a pretty, popular, and musically inclined barmaid, who holds "court" in the local . Love notwithstanding, when his old grandfather passes on unexpectedly, the young Prince must turn his back on the girl, and take his place in the small Kingdom that he's been preordained to rule. He returns for one more visit to Heidelberg, and bids Kathie a poignant farewell.