Douglas Island
This article is about the island in Alaska. For other islands, see Douglas Island (disambiguation). 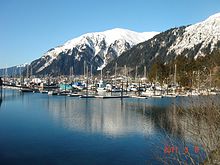 Douglas Harbor in, Douglas, Alaska The island in the midground, right, houses a US Coast Guard station. Mount Juneau lies in the background behind the Coast Guard island

Douglas Island is a tidal island in the U.S. state of Alaska, just west of downtown Juneau and east of Admiralty Island. It is separated from mainland Juneau by the Gastineau Channel. The Juneau-Douglas Bridge, connecting the island with Juneau, provides a two lane road to and from the island and accommodates both vehicular and pedestrian traffic.[1] Recently, there have been plans to build a new bridge from North Douglas to the Mendenhall Valley. Admiralty Island lies to the west and south, across the Stephens Passage. Douglas Island was named for John Douglas, Bishop of Salisbury by Captain George Vancouver. Joseph Whidbey, master of the Discovery during Vancouver's expedition, was the first to sight it in 1794.[1] 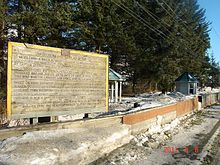 Interesting features of the island include remnants of the Treadwell gold mine, Sandy Beach, the only sand beach in the Juneau area (made from mine tailings), Eaglecrest Ski Area, Perseverance Theatre, and the Douglas Public Library. A tidal island, Douglas is connected to the mainland at its north end when the Gastineau Channel is at low tide. During low tide, Douglas Island is connected with Juneau's Twin Lakes area, the Juneau International Airport as well as other sites. 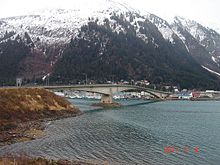 Juneau-Douglas Bridge The bridge crossing Gastineau Channel, connecting Juneau with Douglas Island. The original bridge was built in 1935. The bridge shown here, which replaced the original, was completed in the early 1980s.