Highfields School is a coeducational secondary comprehensive school located in Matlock, Derbyshire. The school has 1,414 pupils (male and female) on roll [1] with 247 in the sixth form [1] and is split across two sites in the town 1.7 miles apart.[2] It is an Arts College that specialises in the performing arts.[3]

School buses are provided by numerous companies, including G&J Holmes and Hulleys of Baslow but mainly by Slacks Travel. Buses leave both sites to numerous drop offs around the county at 3:40 pm. Morning services are also operated, the majority following the reverse of the afternoon buses.[citation needed]

It was however, been recently proposed that the school day is altered so that the lunch is shortened by 15 minutes to 50 minutes and the school day ends 15 minutes earlier, at 3:15 pm each day.[6] However, it was decided to deduct 5 minutes from Lunch and add 5 minutes to break instead. This means the school timetable alters slightly but finishes and starts at the same time. This was done because it was a problem for some parents to collect their child or children from school at 3:15pm.[4]

Incorrect Uniform is a C3 offence under the consequences system. One ear stud and a watch are allowed but no other jewellery is allowed unless it had been discussed with the school. Body piercings and 'hoodies' are not allowed.[4] Incorrect uniform may be asked to be removed. Sixth form students have no set uniform but have to stick to a controlled dress code.[4]

The school policy clearly states that only plain black or brown footwear may be worn and that shoes must not have any logos or motifs. The school dress involves a black jumper with the school logo, plain black trousers or skirt and a white polo shirt with logo. A full length shirt may be worn but only with a red tie with a school logo. All outdoor clothing must be removed indoors and must be plain black without logos (if possible) [4]

The school policy also states that hair gel is allowed but inappropriate colours or styles are not allowed and students may be asked to change hairstyle by teachers.[4]

The school PE kit includes navy Blue shorts, white trainers or football boots, a royal blue rugby shirt with reversible white strip and royal blue knee length socks. A gum shield is recommended for rugby and hockey, as are shin pads. There is also a royal blue polo shirt with logo which is only allowed in Summer. For Technology lessons students need two aprons, one for working in the workshop, although the school does supply students with aprons if they haven't got one. The other apron is used for cooking. The school also supplies these but at a charge of 20p per lesson.

Situated at Starkholmes it is the site used by year 7 and 8 students. The head of Starkholmes site is Sheila Laming.[7] The building used to be the site of Charles White's Secondary Modern School but was converted in 1982 when the three pre-comprehensive schools merged (See History)

Situated at Lumsdale, it is used by years 9–11 and sixth form. The head of Lumsdale site is Lynn Davies.[7]

Redevelopment of both sites was due to start after Christmas 2007 with the bulk of the work to be performed during the summer holidays of 2008.[8]

At Starkholmes several major areas will be addressed such as replacing the 'Terrapins' (portable classrooms), where English and Drama are taught, with permanent structures, the installation of a reception area and a new ventilation network as well as redecoration of the main building.[8] As of January 2010, the terrapins have been demolished, redecoration has taken place, the ventalation system has been installed and the Art facilities have been redeveloped.[4]

At Lumsdale the development has already begun. The installation of a lift between the ground floor and the library was completed in October 2007. There will also be some more major building developments such as the enclosing of the open-plan walkways into corridors, refurbishment of toilets, remodelling of reception, building a new section between the sixth form area and Performing Arts block and the installing of a new ventilation system.[8] As of January 2010 the 'Coffee bar' has been upgraded into an open entrance space, air conditioning has been installed, doors replaced and a new seclusion unit developed.[4]

The school was inspected in full by OFSTED in 2006. The inspection report can be read here. The summary of the inspections reads: The school and inspectors agree that this is a satisfactory school with some good features, and there is a strong commitment and determination to make improvement. This contrasts to the 1999 report which said On balance, the school has more strengths than weaknesses.

The last whole school inspection was in February 2009. The school was below its grade 2 good target, with a satisfactory grade 3, but with improvements since the last inspection. The final report, which can be read here, stated that Highfields is a satisfactory school with several strengths. Its students develop well into mature and considerate citizens who take an active part in school life and the community.[12] It also noted the school's performance, Students make satisfactory progress academically as they journey through the school and standards are above average. Notably more than 70 % of students in 2008 attained five or more higher GCSE grades which surpasses the school's attainment in previous years. However, this masks some significant variation between groups of students.[12]

Details on the school's recent performance in public examinations can be found here. Highfields was the third best-performing school in Derbyshire at A-level in 2007 according to BBC tables [13] and the seventh best-performing at GCSE,[14] both of these higher than their normal placings in these league tables.

Highfields took part in a study in 2004 which was reported by the Department of Education. The interest arose from the school choosing to look at diversity despite its very low ethnic mix. A theatre group presented plays that centred on racism in towns like Matlock. The study led to collaborations with dissimilar schools in Derby that were funded by an interested company.[15] 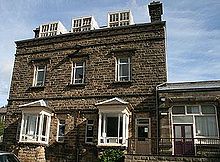 As a Grammar school, Bailey's accepted students whose parents paid or who gained scholarships (by passing the Eleven plus exam) until fees were phased out, leaving scholarship as the only means of entry.[16] Everyone else attended Charles White, a Secondary modern school, hence it is estimated that Charles White students outnumbered Bailey's students 3:1.[16] White had been built especially by Derbyshire County Council to accommodate the children who couldn't attend Bailey's.[16]

The two schools were merged to create Highfields, a comprehensive. The site of Charles White became lower site of Highfields, Ernest Bailey was converted to the county council record offices and a new school was built to house the new Upper Lumsdale site.[16]

The original headmaster, David Marshall, was headmaster from 1982 when the school was founded until he was replaced by Ian Alford however his name lives on as it is the name of the school sports hall. However by 2006 Mr Alford left the school too for a job in the Derbyshire LEA and was replaced by Dr Ramsey Tetlow, the current headmaster who among many things has implemented the school's new Performing Arts status, received in 2006, and brought a new deputy headmaster to the school.