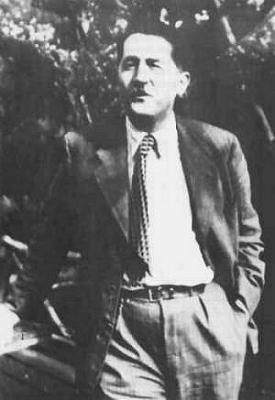 Korsch was born in Tostedt, near , to the family of a middle-ranking bank official.

He attended universities at , , and , studying law, economics and philosophy. He acquired a Doctorate at Jena in 1910. From 1917 to 1933 he was active in leftwing politics in , leaving on the night of the . After a brief stay in England and Denmark, he and his wife settled in the in 1936, teaching at Tulane University, , and working at the International , .

Korsch studied in London between 1912 and 1914, becoming a member of the there. At this time he also married the person who would have lifelong involvement in his theoretical work, . Korsch's wartime experiences in Germany radicalised him, especially the ferment within the leftwing parties of Germany following the Russian Revolution. Uprisings such as that of the Spartacists in Berlin in January 1919, and the in April 1919, made revolution seem imminent to many in Europe. Korsch focused his studies and writings on working-out a replacement economic system for workers' councils to implement across Germany, published under the title "What is Socialization?" in March 1919. Korsch joined the German Communist Party in 1920. He became Communist Minister of Justice in the regional Thuringian government in October 1923.

Korsch attributed the failure of the German revolution to the lack of ideological preparation and leadership of the working class. Accordingly, he turned his focus to developing workers' organisations into bodies subjectively capable of realizing revolutionary opportunities. In contrast to what seemed to him a , he thought it would be possible to galvanize workers' organisations into bolder political action if more effort was put into educating workers in the deeper theory of .

In his later work, he rejected as historically outmoded, wanted to adapt Marxism to a new historical situation, and wrote in his "Ten Theses" (1950) that "the first step in re-establishing a revolutionary theory and practice consists in breaking with that Marxism which claims to monopolize revolutionary initiative as well as theoretical and practical direction" and that "today, all attempts to re-establish the Marxist doctrine as a whole in its original function as a theory of the working classes social revolution are reactionary utopias." [http://www.marxists.org/archive/korsch/1950/ten-theses.htm]

Korsch was especially concerned that Marxist theory was losing its precision and validity - in the words of the day, becoming "vulgarized" - within the upper echelons of the various socialist organizations. His masterwork, "Marxism and Philosophy" is an attempt to re-establish the historic character of Marxism as the heir to Hegel. It commences with a quote from 's "On the Significance of Militant Materialism": "We must organize a systematic study of the Hegelian dialectic from a materialist standpoint."

In Korsch's formulation, Hegel represented at the level of ideas the real, material progressiveness of the . Alongside the extinction of 'Hegelianism' around 1848, the bourgeoisie lost its claim to that progressive role in society, ceasing to be the . Marx, in taking Hegel and transforming that philosophy into something new, in which the workers would be the progressive class, himself represented the moment at which the revolutionary baton materially passed from bourgeoisie to workers. To Korsch, the central idea of Marxian theory was what he termed "the principle of historical specification". This means to "comprehend all things social in terms of a definite historical epoch". (Korsch, "Karl Marx", p. 24) He emphasizes that Marx "deals with all categories of his economic and socio-historical research in that specific form and in that specific connection in which they appear in modern bourgeois society. He does not treat them as eternal categories." (op. cit., p. 29f.)

Korsch's stance had ramifications which were unpalatable to the official Communist Party structure - not least, casting the Party's own ideological weaknesses as the only material explanation for the failure of the revolution. Published in 1923, "Marxism and Philosophy" was strongly opposed by Party faithful and other leftwing opinionmakers, including and . Zinoviev famously said of Korsch and his fellow critic , "If we get a few more of these Professors spinning out their theories, we shall be lost". Over the subsequent five years, the German Communist Party gradually purged all such dissenting voices. Korsch survived within a current known as the Resolute Lefts, until his expulsion in April 1926. He remained a communist deputy to the Reichstag.

Korsch's critique was not accepted into official communist theory. It remained the property of communist dissenters and academics for several decades. Within those currents, particularly in Germany, Britain, Hungary and Italy, his influence varies from group to group, but became more significant with the brief revival of revolutionary politics in the late 1960s and early 1970s. Korsch taught and befriended , the Marxian playwright, who said he picked Korsch to instruct him in Marxism due to his independence from the Communist Party. He also instructed , the founder of the , from which the highly influential was to emerge. He also influenced the German Marxist historian . Indirect 'disciples' include and , a former student, before his rejection of Marxism.

A Gesamtausgabe (Complete Works) in German is edited by Offizin Verlag, Hanover, Germany.

A number of works plus a biography, interview with his widow, and a photograph:
*http://www.marxists.org/archive/korsch/

Commentary of , a friend of Korsch
* [http://www.marxists.org/archive/mattick-paul/1962/korsch.htm Karl Korsch: His Contribution to Revolutionary Marxism]