Konica Minolta was formed by a merger between Japanese imaging firms Konica and Minolta, announced on January 7, 2003 with the Corporate Structure completing the re-organization in October 2003.[5][6] Different group companies, such as the operations in the headquarters and national operating companies began the process around the same time, however the exact dates vary for each group company.

On January 19, 2006 the company announced that it was quitting the camera business due to high financial losses. SLR camera service operations were handed over to Sony starting on March 31, 2006 and Sony has continued development of cameras that are compatible with Minolta autofocus lenses. Originally, in the negotiations, Konica Minolta wanted a cooperation with Sony in camera equipment production rather than a sell-out deal, but Sony vehemently refused saying that it would either acquire everything or leave everything that has to do with the camera equipment sector of KM. Subsequently, Konica Minolta withdrew from the photo business on September 30, 2006. 3,700 employees were laid off.[8]

Konica expanded its business precensce and now even extends its business as far as South Africa. The South African Konica Minolta Business Systems unit is a fully owned subsidiary of the Bidvest group and headed up by Alan Griffiths. 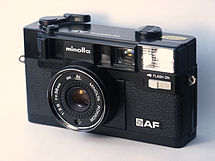 Minolta had been a competitor in the 35 mm SLR market since the development of the manual-focus (MF) SRT and other models in the mid-1960s. Minolta positioned most of its cameras to compete in the amateur market, though it did produce a very high quality MF SLR in the XD-11. Minolta's last MF SLR cameras were the X370 and X700. Shanghai Optical Co. (Seagull) purchased tools and production plant from Minolta at different times, making some X300 series for Minolta branding, and continues to release MD mount film SLRs compatible with the old system under the Seagull name.

Until the sale of Konica Minolta's Photo Imaging unit to Sony in 2006, Konica Minolta produced the former Minolta range of 35 mm autofocus single-lens reflex cameras, variously named "Minolta Maxxum" in North America, "Minolta Dynax" in Europe, and "Minolta Alpha" in Japan and the rest of Asia. This range was introduced in 1985 with the Minolta Maxxum 7000, and culminated with the professional Maxxum 9 (de) (1997) later made in a titanium body (9Ti) and technically advanced 7 (1999). The final Minolta 35 mm SLR AF cameras were the Maxxum 50 and 70 (Dynax 40 and 60), built in China. 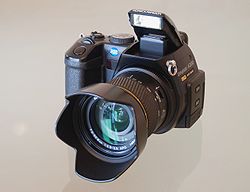 The Dimage A200, a bridge-type camera, the most sophisticated digital camera made by Konica Minolta, shortly before its fusion with Sony

Until recently, Konica Minolta had a line of digital point and shoot cameras to compete in the digital photography market. Their Dimage line (originally written as DiMAGE) included digital cameras and imaging software as well as film scanners.

They created a new category of "SLR-like" cameras with the introduction of the Dimâge 5. This camera mixed many of the features of a traditional SLR camera with the special abilities of a digital camera. It had a mechanical zoom ring and electronic focus ring on the lens barrel, it used an electronic viewfinder (EVF) showing 100 per cent of the lens view, it added many high level features such as a histogram and made the cameras TTL-compatible with Minolta's final generation of flashes for film SLRs. The controls were designed to be used by people familiar with SLR cameras. However, the lens was not interchangeable, and the cameras not a true alternative to an SLR camera. The model 5 had a 1/1.8" sensor with 5 megapixels, and the fixed zoom was equal to a 35–250 mm (relative to 24×36mm format). The models 7, later 7Hi and A1 had 2/3" 6 megapixel sensors and the lens then achieved 28–200 mm equivalent coverage, for which it was designed. The A2 and A200 increased the sensor resolution to 8 megapixels and these models remain popular for semi-professional use as 'glove box' or travel standbys.

The A1/A2/A200 integrated a sensor-based, piezoelectrically actuated anti-camera-shake system. Before the closure of the Photo Imaging unit, the Dimâge lineup included the long-zoom Z line, the E/G lines (the G series finally incorporating former Konica models), the thin/light X line, and the advanced A line.

The DiMAGE G500 was a five megapixel compact digital camera manufactured by Konica Minolta in 2003. It comes in a stainless steel case, 3x zoom lens with a retractable barrel, and dual Secure Digital and MagicGate card slots, the camera has a 1.3-second startup time.[9][10]

Minolta made some early forays into digital SLRs with the RD-175 in 1995 and the RD-3000 in 1999 but were the last of the large camera manufacturers to launch a successful digital SLR camera using a current 35 mm AF mount in late 2004. The RD-175 was based on the Maxxum/Dynax 505si 35 mm film SLR and used three different 1/2" CCD image sensors - two for green and one for red and blue - supplied with images by a light splitting mechanism using prisms mounted behind the lens. The RD-3000 used Vectis APS film lenses and again used multiple CCDs - this time two 1.5MP 1/2" sensors stitched to give a 2.7MP output image. It wasn't until late 2004 (after the merger with Konica) that they launched the Dynax/Maxxum/α 7, a digital SLR based on the very successful Dynax/Maxxum 7 35 mm SLR body. The unique feature of this camera is that it features an in-body Anti-Shake system to compensate for camera shake. However, by 2004 Canon and Nikon had a whole range of digital SLR cameras and many serious photographers had already switched, thus leading Konica Minolta to withdraw from the market and transfer assets to Sony. The only two Konica Minolta digital SLRs to reach production before the company's withdrawal were the Dynax/Maxxum 7D and the Dynax/Maxxum 5D (which is an entry-level model that shared the 7D's sensor and Anti-Shake technology).

In early 2006 Sony announced its Sony α (Alpha) line of digital SLRs, (based on Konica Minolta technology) and stated they were scheduled to launch production in the summer of 2006. The Sony Alpha 100, announced on June 6, 2006, is generally agreed to have been a Konica Minolta design based on the 5D with minimal Sony input. The range of 21 Sony lenses announced at that time also included only revisions of earlier Minolta designs, or models which had been in development, rebadged and with minor cosmetic changes. The Sony Alpha range has remained compatible with all Minolta AF system lenses, and most accessories, from 1985 onwards.

In 2000 Minolta announced the introduction of Super Sonic Motor (SSM) focusing to a limited number of new lenses. This dispensed with a mechanical drive between camera and lens, but only SLRs made from 1999 onwards (the Dynax/Maxxum 7 and later) were compatible, the professional Dynax 9 requiring a factory upgrade to operate. Sony announced a program in 2008 to fit more future lenses with SSM and these designs may, therefore, not be compatible with 1985–1999 SLR bodies.

For some time after the merger between Konica and Minolta, both product lines continued to be sold, while research and development efforts were underway to create new products. The first Konica Minolta badged products were almost entirely "Konica" or "Minolta" products however, as they were the next generation products being produced by both companies before the merger. These products included MFPs such as the Konica Minolta bizhub C350 (a "Minolta" design, also badged as the Konica 8022 and Minolta CF2203), and Konica Minolta 7235 (A "Konica" design).

Successive models included greater integration between the two sets of technologies, and current products such as the bizhub C451 (pictured below in this article) contain many technologies from both histories. Some products such as the bizhub 501 are more noticeably an engine design from one company rather the other, however the system itself, including operation, features and RIP technologies are in the "new style" that holds little legacy from either former company.

As with many MFP manufacturers, some of the market segments are not produced directly by the manufacturer. In Konica Minolta's case, many smaller SOHO MFP products (such as the bizhub 130f, wearing Minebea marks in hardware and in software drivers) are produced by third parties. By the same token, many other companies also re-badge Konica Minolta products under OEM agreements.

Due to the increased complexity of both MFP and printer devices, Konica Minolta increased technology sharing between the two lines of products. In many regions, this has led to the integration of the Printer products company in to the Business equipment products company.[12]

Konica Minolta has spun off business units into separate companies. 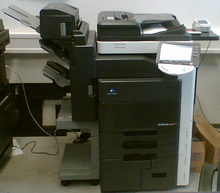 A Konica Minolta bizhub C451 MFP with an attached finisher.

Pursuing advanced imaging markets Konica Minolta's digital multi-functional peripherals (MFPs), branded the "bizhub" series, are equipped with multiple functions (copying, printing, faxing, scanning), and can integrate into any corporate network environments. They allow users to consolidate the administration of office equipment connected to a network by using a series of network management software programs and even to manage and share both scanned data and computer-generated data.

Advanced generation of compact, lightweight and high-performance color laser printers. The market for color laser printers continues to expand, fuelled by the rapid shift of business documents from monochrome to color. Konica Minolta's color laser printers - branded the "Magicolor" series and using toner technology inherited from QMS/Qume include what was then the world's smallest and lightest color laser printer with 2400 dpi photographic quality, the Magicolor 2430DL of 2005. This printer also offered direct output from digital cameras using PictBridge and EXIFII Print Order Management technology, via USB. The Magicolor series covers from entry level home/office models like the 2430s successors, to large print stations for corporate environments.

KONICA MINOLTA OPTO, INC. has been developing optical components, units, and systems for various application, and has been supplying to the many customers in the world.

With headquarters in Macquarie Park, just north of the Sydney CBD, Konica Minolta Business Solutions Australia has offices in every capital city.