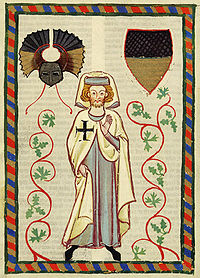 Tannhäuser, from the Codex Manesse

Tannhäuser (Middle High German: Tanhûser; died after 1265) was a German Minnesänger and poet. Historically, his biography is obscure beyond the poetry, which dates between 1245 and 1265. Socially, he presumed familial lineage with the old nobles, the Lords of Thannhausen, residents in their castle at Tannhausen, near Ellwangen and Dinkelsbühl; moreover, the historical Tannhausen castle, is at Neumarkt in der Oberpfalz.

Tannhäuser was an active courtier at the court of Frederick II of Austria (1230–1246), and the Codex Manesse (1340) depicts him clad in the Teutonic Order habit, suggesting he might have fought the Fifth Crusade (1213–21). As literature, Tannhäuser’s poems parody the traditional genre, because he was a proponent of the leich (lai) style of poetry; however, the Bußlied (Poem on Atonement) is unusual, given the eroticism of the remaining Codex Manesse. 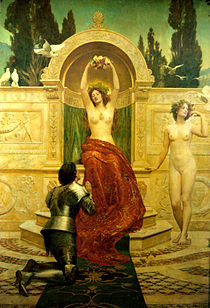 In the Venusberg by John Collier, 1901: a gilded setting that is distinctly Italian quattrocento

Based on his Bußlied, Tannhäuser became the subject of legend, first attested in 1430, propagated in ballads from 1450. The legendary account makes Tannhäuser a knight and poet who found the Venusberg, the subterranean home of Venus, and spent a year there worshipping the goddess.

After leaving the Venusberg, Tannhäuser is filled with remorse, and travels to Rome to ask Pope Urban IV if it is possible to be absolved of his sins. Urban replies that forgiveness is as impossible as it would be for his papal staff to blossom. Three days after Tannhäuser's departure Urban's staff blooms with flowers; messengers are sent to retrieve the knight, but he has already returned to Venusberg, never to be seen again.[1]

The legend has been interpreted as a traditional folk tale which has been subject to Christianization where the familiar story of the seduction of a human being by an elf or fairy leads to the delights of the fairy-realm but later the longing for his earthly home. His desire is granted, but he is not happy, and in the end returns to the fairy-land.[2]

Aleister Crowley wrote a play called Tannhauser which follows the character Tannhauser and the infamous Venus.

English Poet Algernon Charles Swinburne cites a passage of one version of the Tannhäuser legend in the epigraph to his "Laus Veneris" (the praise of Venus).

H.G. Wells' Sleeper watches an adaption in The Sleeper Awakes (1901).

In Philip Reeve's Mortal Engines series of books, there is a range of volcanoes named the Tannhäusers.

In Blade Runner replicant Roy Batty evoked it as he dies, "I watched C-beams glitter in the dark near the Tannhauser Gate. All those moments will be lost in time... like tears in rain... Time to die".[3]