Wynken, Blynken, and Nod
This article is about the poem. For the 1938 animated short film, see Wynken, Blynken and Nod (film).
"Blinken" redirects here. For the author, see Meir Blinken. For the former US ambassador to Belgium, see Alan Blinken. 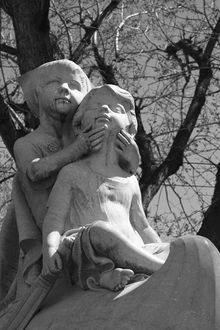 "Wynken, Blynken, and Nod" is a popular poem for children written by American writer and poet Eugene Field and published on March 9, 1889. The original title was Dutch Lullaby.

The poem is a fantasy bed-time story of three fishermen sailing and fishing in the stars. Their boat is a wooden shoe. The fishermen symbolize a sleepy child's blinking eyes and nodding head.

Its lyrical structure has availed itself to musicians: Ethelbert Woodbridge Nevin the American pianist and composer wrote a piano setting, and musical versions have been recorded by The Big 3 featuring Cass Elliot (1963), the Simon Sisters (1964), by Donovan on his children's album H.M.S. Donovan (1971),[2] by Buffy Saint-Marie who sang a version on Sesame Street in 1975, and on her album Sweet America (1976). and by The Doobie Brothers (1981).

References in other artistic works