The Norrish type I reaction is the photochemical cleavage or homolysis of aldehydes and ketones into two free radical intermediates. The carbonyl group accepts a photon and is excited to a photochemical singlet state. Through intersystem crossing the triplet state can be obtained. On cleavage of the α-carbon carbon bond from either state, two radical fragments are obtained. 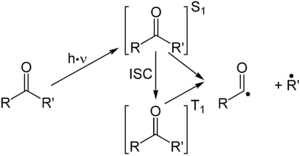 Several secondary reaction modes are open to these fragments depending on the exact molecular structure.

The synthetic utility of this reaction type is limited. It often is a side reaction for instance in the Paternò–Büchi reaction. One organic synthesis based on this reaction is that of bicyclohexylidene [2].

A Norrish type II reaction is the photochemical intramolecular abstraction of a γ-hydrogen (which is a hydrogen atom three carbon positions removed from the carbonyl group) by the excited carbonyl compound to produce a 1,4-biradical as a primary photoproduct (IUPAC definition).

Secondary reaction are either intramolecular recombination of the two radicals to a cyclobutane compound (path A) or fragmentation to an enol and an alkene.

The reaction was first reported in 1937 by Ronald George Wreyford Norrish.

The Norrish reaction has been studied in relation to environmental chemistry with respect to the photolysis of the aldehyde heptanal, a prominent compound in Earth's atmosphere [3]. Photolysis of heptanal in conditions resembling atmospheric conditions results in the formation of 1-pentene and acetaldehyde in 62% chemical yield together with cyclic alcohols (cyclobutanols and cyclopentanols) both from a Norrish type II channel and around 10% yield of hexanal from a Norrish type I channel (the initially formed n-hexyl radical attacked by oxygen).

In one study [4] the photolysis of an Acyloin derivative in water in presence of hydrogen tetrachloroaurate (HAuCl4) generated nanogold particles with 10 nanometer diameter. The species believed to responsible for reducing Au3+ to Au0 [5] is the Norrish generated ketyl radical. 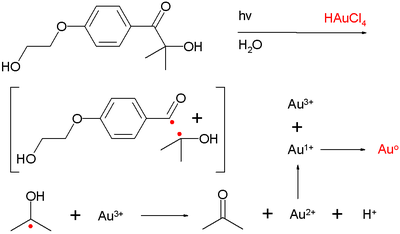