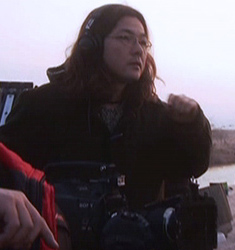 Iwai attended , graduating in 1987. In 1988 he started out in the Japanese entertainment industry by directing TV dramas and music videos. Then, in 1993, his TV drama, "Fireworks", brought him critical praise and an award from the Japanese Director's Association for his portrayal of a group of children in the town of .

In 1995 he went on to start his career in feature films, starting with the box-office hit "", in which he cast pop singer in challenging dual roles. "Love Letter" also launched the movie career of who won a as 'Newcomer of the Year' for her portrayal of Itsuki Fujii as a young girl. Iwai collaborated with cinematographer to produce a film praised for its evocative winter cinematography. "Love Letter" made an impact in other east Asian countries too, notably where the film's success helped break down the post-World War II barriers to Japanese films being shown there.

In 1996 came the commercial and critical success of "Swallowtail Butterfly", a multifaceted story of the fictional Yen Town, a city of immigrants in search of hope and a better life with three separate and distinct main characters. Ageha (), an orphaned teenage girl, Glico (Chara), a prostitute turned pop star, and Feihong (), an immigrant who manages Glico's career and owns the Yen Town club.

Iwai enjoyed another kind of success with this film as well, having teamed up with to create the music for the film and the Yen Town Band, headed by Pop star Chara. The band they created became a commercial hit in Japan. He would team up with Kobayashi again in 2001 for the harrowing High School Drama "". Kobayashi would create the music for the titular pop star, Lily Chou-Chou (voiced by Japanese singer ), that is spread through the film (as well as ), and later be released as an album entitled "Kokyu (Breathe)".

In 2002 he released a short, "ARITA", in which he composed his own film score for the first time. In 2004 Iwai released "Hana & Alice", his first comedy. He once again composed the film score himself.

His next project, a piece he's written about the Japanese indie Rock scene in the mid 1990s called "Bandage", is slated for release in late 2006. It will be helmed by , of fame. Curiosity has spread over why Iwai is not directing his own script, but no answer has been revealed. He has recently directed a commercial airing in Japan featuring , whom he has not worked with since 1998.

October, 2006 sees the Iwai produced film released in Japan. The film is directed by Naoto Kumazawa and was written by Ami Sakurai. It stars previous Iwai actors , and . Also in 2006, Iwai spent time documenting and interviewing while filming (Inugamike no ichizoku - 2006) to create a feature length documentary about the director's life.