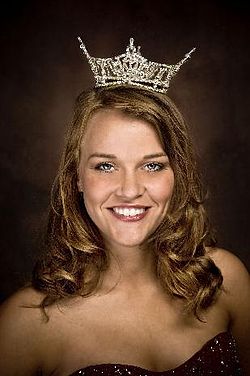 The Miss Alaska competition is a scholarship pageant that selects the representative for the state of Alaska in the Miss America pageant.

Miss Alaskas 1975 and 1978, Cindy Suryan and PJ Gentry respectively, were popular Anchorage television and radio personalities for many years. Miss Alaska 1976, Kathy (Tebow) Sharp worked as a National Weather Association certified television weather broadcaster in the early 1980s, and was on the same news team as co-anchor, Cindy Suryan.

Miss Alaska 1981, Laura Trollan, also worked in local television as an Anchorage weather broadcaster. Miss Alaska 1982 became an award-winning realtor and business woman, achieving recognition for The Kristan Cole Team. Miss Alaska 1984, Maryline Blackburn, pursued a career in music and has received critical acclaim as a recording artist. Miss Alaskas 1985 and 1986 went on to establish successful careers in modeling: Jerri Morrison as a plus-size supermodel, most recognizable for her catalog work for Nordstrom and JC Penney, and Kristina Christopher-Taylor as a TV and print model featured in several national campaigns.

In addition to the winners, runner-ups in the mid-eighties also obtained national recognition. Miss Anchorage, Alice Welling, established herself as a comedic actress and singer, and Miss Wasilla, Sarah Heath Palin, rose through political ranks to become Governor of Alaska and the 2008 Republican vice-presidential nominee.

Stacey Storey, Miss Alaska 1995, pursued an acting career and appeared in such films as Elvis and Annabelle. She marked what would become a resurgence of pageant winners entering the performing arts throughout the 2000s, most notably professional violinist Audrey Solomon, Miss Alaska 2000, as well as Miss Alaskas 2001 and 2003, who performed on Broadway.

The year in brackets indicates the year of the Miss America competition the award/placement was garnered.